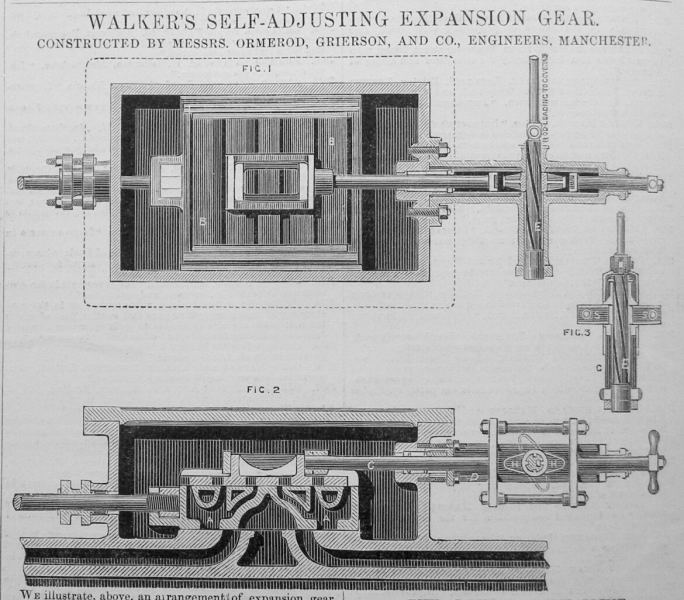 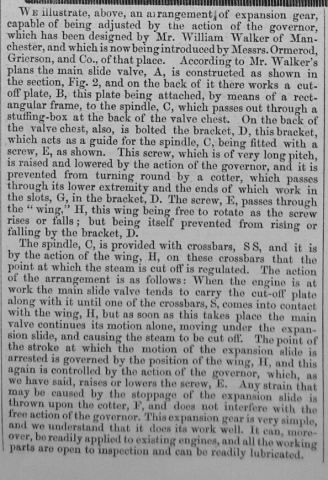 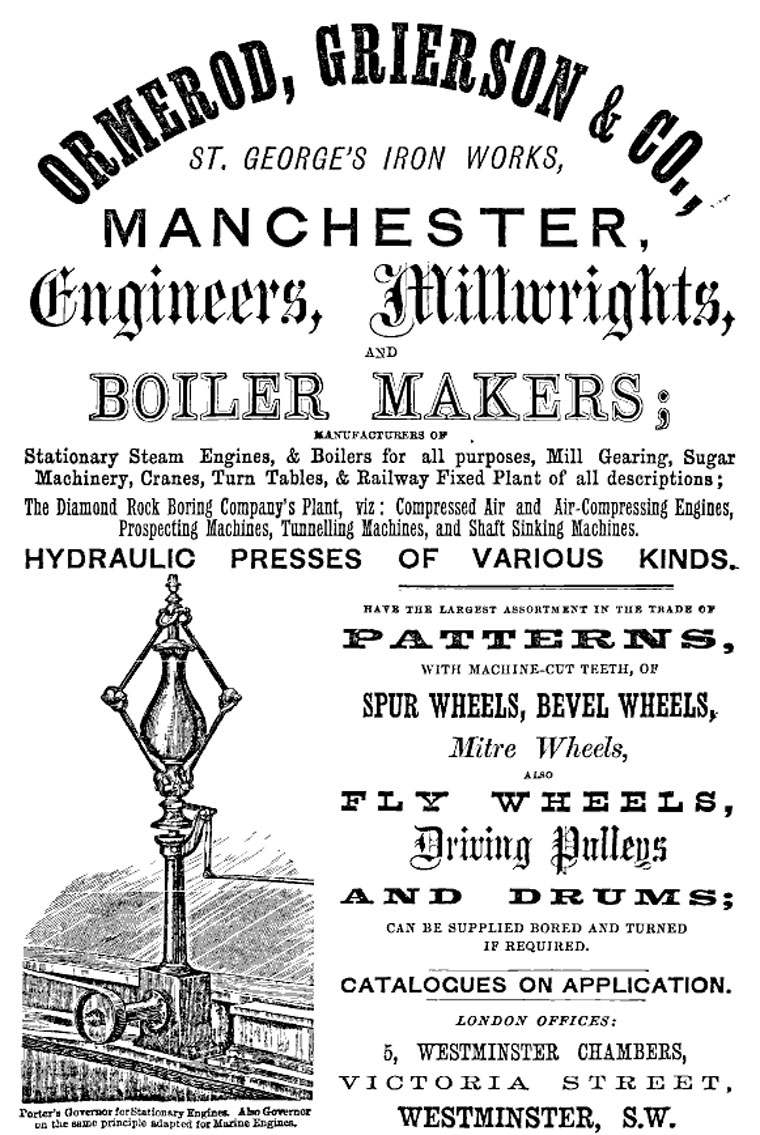 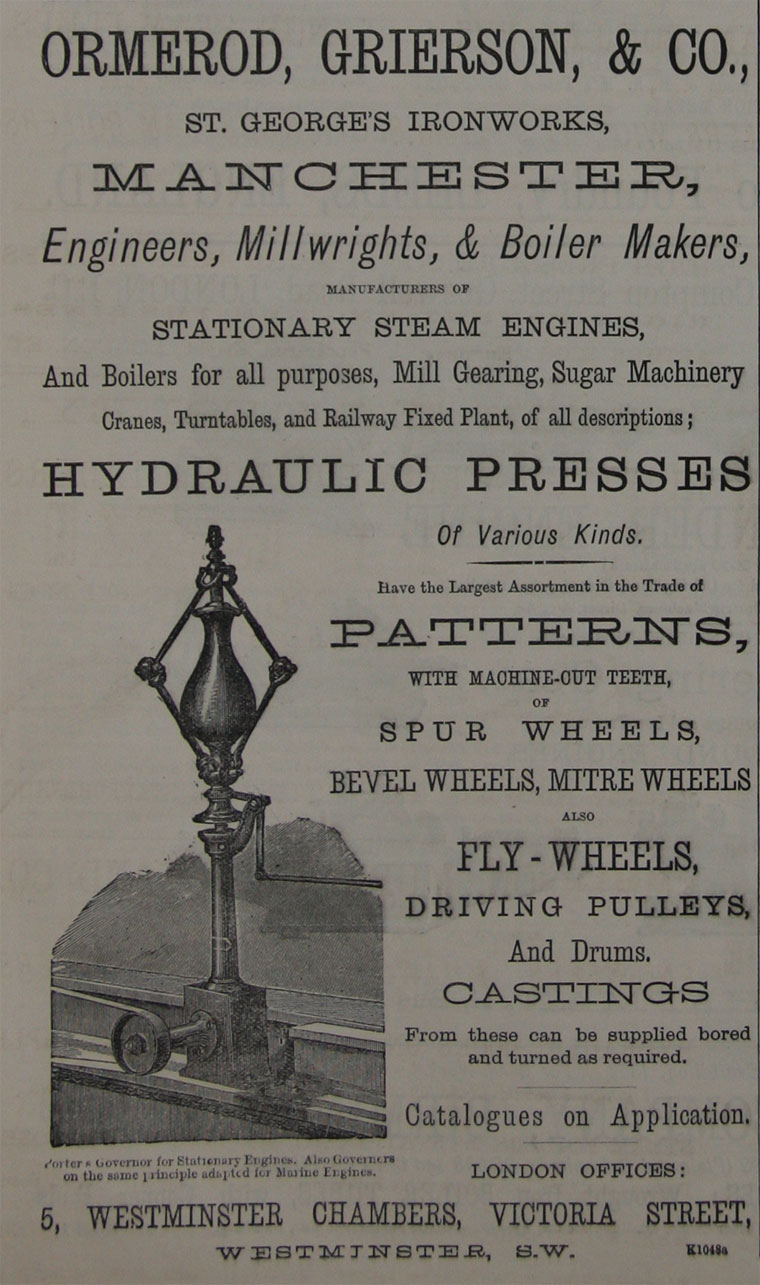 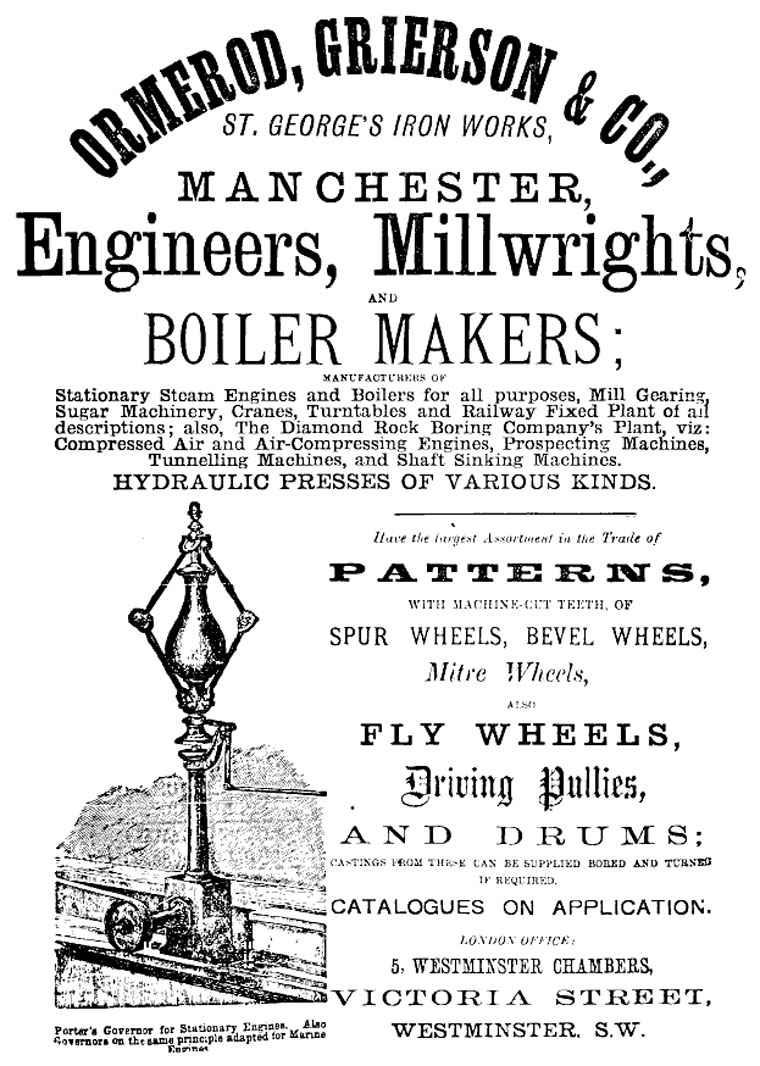 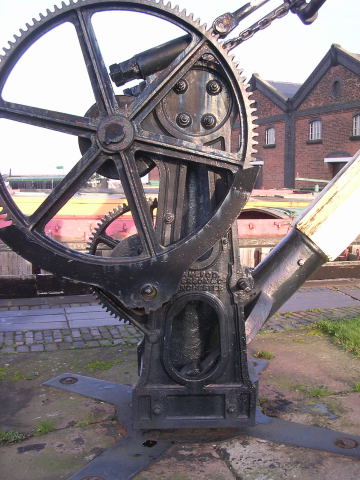 Ormerod Grierson & Co of Manchester were engineers and iron and brass founders.

1861 Known as Richard Ormerod and Son.

1862 'Large Iron Bridge for India.
—There is in course of construction in Manchester a very large iron railway and carriage way bridge combined, intended to span the Jumna, near Delhi. It is to consist of 12 spans, each girder being 216 ft. long, which, with the thickness of the eleven piers upon which it is to rest, to give a total length of over half a mile. The first span of this malleable iron lattice bridge it now completed. The metals for the East India Railway Company are laid along the top, and the roadway along the bottom, the latter having a clear height of 16 ft. The bridge is from designs of A. Rendel, Esq., C.E., London, and is being constructed by Messrs. Ormerod, Grierson, and Co., of the St. George’s Ironworks, Hulme, Manchester. One unusual feature of the structure is that all the rivet holes are drilled instead of being punched. The bridge, notwithstanding its great strength, has a light and airy appearance. The open lattice-work has the effect of relieving it from the dull and heavy aspect inseparable from tubular structures.'[1]. The Jumna (now Yumana) bridge was mentioned in Charles T. Porter's memoirs. Porter, an eminent American engineer, worked with Ormerod, Grierson as a consultant. See also below.

1863 they became Ormerod, Grierson and Company of Hulme Hall Road and Chester Road, Hulme. The factory was located on Hulme Hall Road, occupying land between the Bridgewater Canal and the adjacent railway viaduct. [2] Apartment blocks have recently been built on the site.

1865 Dissolution of the Partnership between Henry Houldsworth Grierson and John Chadwick, in the trades or businesses of Ironfounders and Mechanical Engineers, carried on at the St. George's Foundry, in Hulma, in the parish of Manchester, under the style or firm of Ormerod, Grierson, and Co., by mutual consent; debts received and paid by Henry Houldsworth Grierson[3]

1866 Letter from H. Houldsworth Grierson to 'Engineering' clarifying the position regarding their ceasing manufacture of the Allen high speed steam engine, due to the high cost of manufacture. They were also giving up bridge manufacture, and concentrating on engines, boilers, and millwright work.[5]

1871 '... licenses for constructing the Babcock and Wilcox engine in this country have been taken by Messrs. Ormerod and Grierson, of Manchester, and by Messrs. Crossley Brothers, of the same place. The engine was lately fully described by us, and we believe that it is one which is likely to come into extensive use when its merits become generally known, as they deserve to be.'[7]

1881 May have made a steam locomotive.

1892 They were known as St George's Ironworks.

'GREAT IRON RAILWAY BRIDGE FOR INDIA. Messrs. Ormerod, Grierson, and Co., of the St. George's Ironworks, Hulme, have just completed the third span of a huge wrought-iron lattice girder bridge for a railroad and carriage-way combined, which is intended to cross the river Jumna, near Delhi. The bridge is for the East India Railway Company, and is from the designs of Mr. A. M. Rendel, C.E. If our readers will imagine an iron tube, with solid top and bottom, with open cross lattice work sides, through which air and light can freely pass ; that this tube is over half a mile long, 18ft. high by 18ft. wide, with a clear space 16ft. from the level of the highway for carriages and pedestrians to the under side of the railroad above, they will be able to realise the extent of this colossal structure. Its entire weight will be about 3,400 tons, and when delivered at Liverpool for shipment to India, it will have cost more than £50,000. The bridge will be composed of 12 girders, each 216 ft. long, supported at each end by stone piers, 205 ft. distant from each other. Each span has a rise of five inches in the centre. The top and bottom parts of the girders resemble a continuous trough, the upper pair being inverted. The bottom of this trough has one plate 3/8in. in thickness, the strength gradually increasing to three plates of the same size, at the centre. The sides of the trough are composed of two half-inch plates, riveted together ; and instead of being joined to the bottom plates in the usual way with angle iron, they are flanched, or bent to a curve of four-inch radius, thus forming their own attachment. In a structure of such magnitude, and which will be exposed to the intense heat of an Indian sun, it is of the greatest importance that due provision be made for variation of expansion and contraction. This provision has been secured by a simple arrangement which allows the end of each girder to slide on rollers with perfect certainty and ease ; while by the same apparatus the varying deflections are also provided for. All the parts of the structure are so fitted, by planing and other self-acting tools, that great ease of construction has been secured when the work is being put together, giving also the advantage of little trouble in joining the parts on their arrival in India. The drilling machines for boring the plates are fine specimens of that class of tools. One of them will drill at one time 160 holes one inch diameter in a plate 13 ft. long, 4 ft. broad, by ? in. thick. The pressure the drills by the movement upwards of the table supporting the plate, regulated by two small valves which act upon two hydraulic rams.'[9]