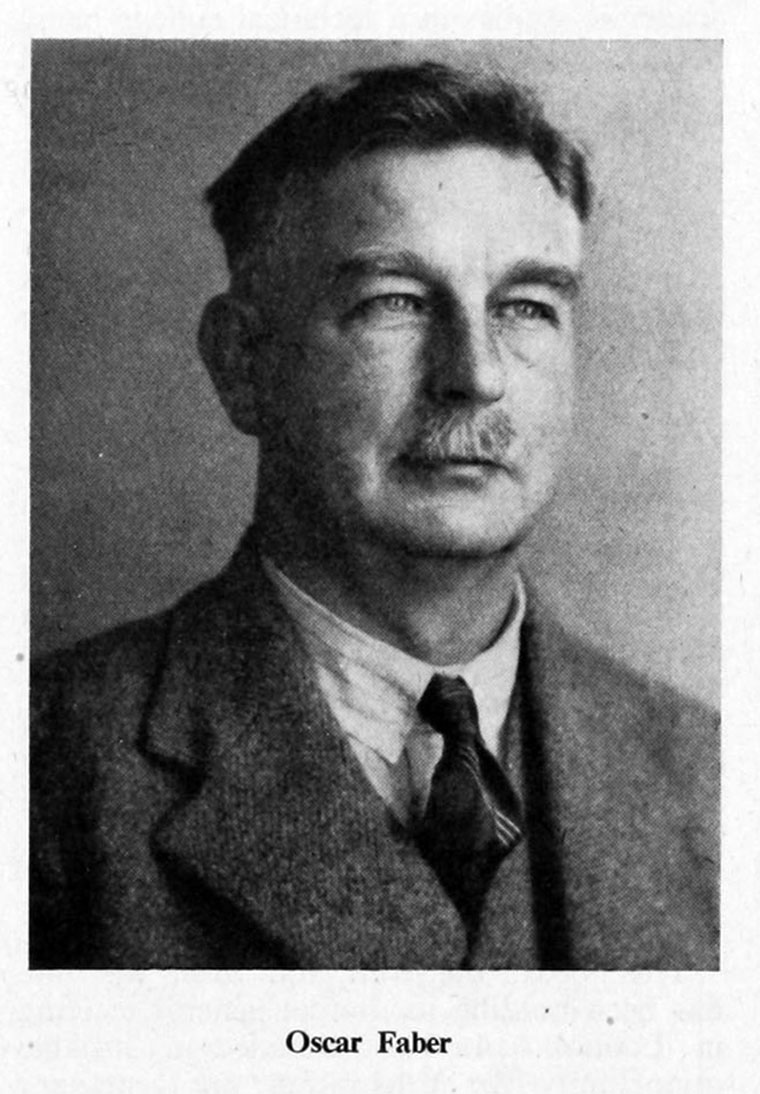 Dr. FABER was a Clothworkers Scholar at City and Guilds (Engineering) College, from 1903 to 1906. He graduated B. Sc. (Eng.), and subsequently gained the degree of D.Sc. (Eng.).

He became assistant engineer to the Associated Portland Cement Manufacturers and later the Indented Steel Bar Engineering Company, and was responsible for designs of many important reinforced structures.

Later he was appointed chief engineer to Trollope and Colls, Ltd., and was responsible for the design of engineering work in many large London buildings.

In 1921 he commenced private practice and was consulting engineer to the Bank of England and for many other important buildings in London and abroad. The University of Durham conferred the honorary degree of D.C.L. in recognition of his work in connexion with the underpinning of Durham Castle.

Dr. Oscar Faber died on Monday of last week, at the age of sixty-nine. He was a well-known figure in the civil engineering world, particularly as an authority on structural engineering and on heating and ventilating problems. He was a past-president of the Institution of Structural Engineers and of the Institution of Heating and Ventilating Engineers, a fellow of the City and Guilds Institute, a full member of both the "Civils " and the "Mechanicals" and an associate member of the" Electricals'." He was also a C.B.E., and was awarded an honorary D.C.L. degree by Durham University for the underpinning work which he carried out at Durham. He obtained a D.Sc. at London University for a thesis on shear in reinforced concrete beams.

Faber was educated at St. Dunstan's College, Catford, and the City and Guilds College. During the early part of his professional career he worked with the Associated Portland Cement Manufacturers, the Indented Bar Engineering Company, Ltd., and with Trollope and Colls, Ltd.

However, he set up as a consulting engineer in 1921, and continued to practise as a consultant for the rest of his career; in 1948 the firm of which he was senior partner expanded to its present style of Oscar Faber and Partners.

Significant contributions to engineering knowledge were made by Dr. Faber both in the practical art of designing major structures, and in research. Only last year we commented in THE ENGINEER on his most recent research investigation, in which the 1250-ton testing machine at Dorman Long's works was used for full-scale tests on composite stanchions, comprising a steel joist encased in concrete. A design method for these composite stanchions was set out in his paper on this work.

His other researches included the derivation of a piling formula and work on various aspects of concrete technology. Here, the problems of research and design often overlapped; indeed, the solution of problems which had an immediate bearing on structural design was a characteristic of his work, as exemplified by his papers before the various institutions, such as the well-known one entitled "Plastic Yield, Shrinkage and Other Problems of Concrete and Their Effects on Design," a paper presented at the 1927-28 session of the Institution of Civil Engineers.

The works most commonly associated with the name of Oscar Faber are probably the rebuilding of the House of Commons, after its wartime destruction, and the new Bank of England building, constructed about thirty years ago. These two buildings are, of course, of special public interest. In the former case, an unusual problem in air conditioning for the Commons chamber was involved. But these two alone do not give an adequate perspective of Faber's achievements in structural design.

He was responsible for several large reinforced concrete grain silos and flour mills structures of imposing dimensions, which required an unusual approach, both structural and architectural, in their design. Most of them he built at dockside sites, such as at Cardiff, Avonmouth, and at the London docks. He designed various heavy industrial structures, such as steel works. He also built extensively abroad, especially at Shanghai and Hong Kong, and his work at home included a number of building schemes for banks and public buildings, and large-span aircraft hangars.

The structural engineering in these major achievements was often unusual in its nature, and involved the solution of difficult problems at some of the sites. Some of these problems have been described in Faber's published papers. He specialised particularly in reinforced concrete construction, applying it to piled and raft substructures for buildings on soft ground, and to his original designs for grandstands.

His position as a leading authority on structural design was further reinforced by the publication of textbooks, as well as his numerous technical papers. These textbooks relate principally to reinforced concrete construction, but not exclusively, and structural steelwork design and heating and ventilating were also treated by him. He was consulted on codes of practice and was chairman of several codes of practice committees.

The civil engineer is, by force of evolution, becoming more specialised in his knowledge and experience. But these details of Dr. Faber's career show that a vast and intricate field of knowledge can still be mastered. His interests went further than we have, as yet, indicated, and he was appreciative of the aesthetic aspects of building and of structures. The artistic aspect of the design of structures is a subject on which many civil engineers are content to express no opinion; however, many readers of this notice will doubtless recall Dr. Faber's contribution to the series of lectures on the aesthetic aspects of civil engineering design, held at the Institution of Civil Engineers in 1944. He was there able to discuss problems of the architectural treatment of industrial structures, for instance silos and warehouses, and give characteristic examples from his own work.

A memorial service for Dr. Oscar Faber is to be held in St. Albans Abbey at twelve noon on Thursday, May 24th.

Dr. Oscar Faber, C.B.E., was educated at St. Dunstan's College, Catford, and City and Guilds College (Clothworkers' Scholarship), South Kensington. He gained a B.Sc. and subsequently a D.Sc. in engineering.

Later he became Assistant Engineer to British Portland Cement Manufacturers, Ltd., and afterwards served in a similar capacity with Indented Steel Bar Engineering Co. Then followed an appointment as Chief Engineer to Trollope and Colls, Ltd. After a period of three years he commenced private practice as a consulting engineer for many buildings in London, notably the new Bank of England, House of Commons rebuilding, Church House, Westminster, and many similar works throughout the world. During the 1914-18 war he did important research work for the Admiralty, for which he received the O.B.E. In 1951 he was awarded the C.B.E.

He was elected a Member of the Institution in 1943. In 1945 he was awarded a George Stephenson prize, and in 1947 he delivered a Centenary Lecture at the Institution on the subject of 'Heating, Ventilation and Air Conditioning'.

His death occurred on 7th May 1956 in his seventieth year.