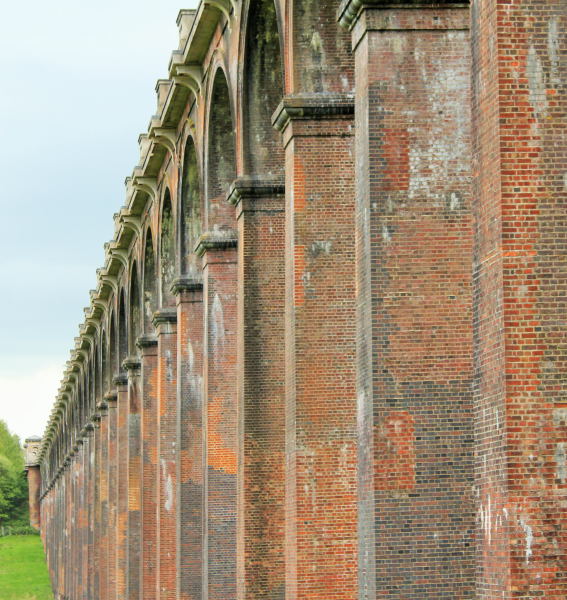 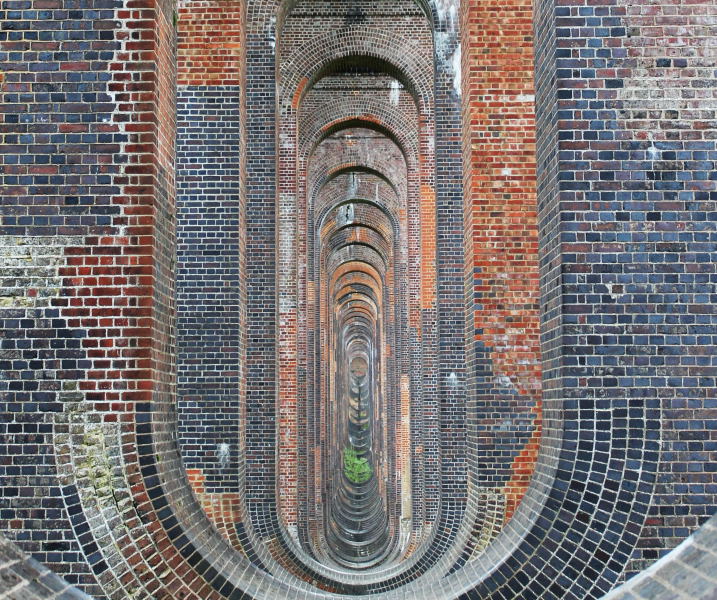 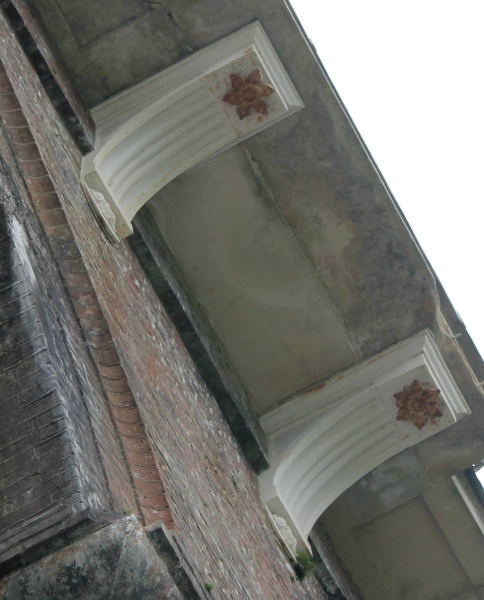 10. Unlike the case with a normal arch, the horizontal bricks must be dressed to the correct curved profile in anticipation of laying the arch bricks

Built in 1839-42, the Ouse Valley Viaduct (also called Balcombe Viaduct) carries the London-Brighton railway line over the River Ouse, north of Haywards Heath and south of Balcombe. It is 1,475 feet (500m) long, with a maximum height of 96 feet (29.3m), and has 37 semi-circular arches with pierced piers.

It was designed by engineer John Urpeth Rastrick in association with the architect of the London to Brighton railway, David Mocatta.

Some sources claim that the 11 million bricks needed for its construction were brought from Holland. This is improbable, although a proportion of those used may have been imported to make up shortfalls from local sources. At that time, clay for brickmaking had to be prepared well in advance of requirements, and the preparation was to some extent dependent on the weather. In addition, other parts of the railway would have demanded enormous quantities of bricks, including Balcombe Tunnel. See also the 1840 report below, which states that 'The bricks, to the number of eleven millions, were made from the adjacent soil.' The stone for the parapets and other superimposed masonry came from Caen, France.

It was restored in 1996-9, largely to address the crumbling stonework. The structure is a Grade II* listed building.

The viaduct is still heavily used, with about 100 trains a day passing over it on the Brighton Main Line.

An impressive spectacle today, the early Victorians must have been astonished at this magnificent structure, constructed at great expense to allow people to travel at unprecedented speed on the new-fangled railways, whose engineers demanded nearly level routes, regardless of the terrain. Today we tend to take masonry viaducts for granted, but Balcombe viaduct is distinguished by its pierced, tapered piers and its stone balustrades and its eight towers.

The photographs can only hint at the challenges faced by the surveyors, designers, carpenters, bricklayers, masons, and other artisans involved in building this structure. Study of the piers, with their varying heights, arched openings, and tapered flanks, allows some appreciation of the achievement of the bricklayers. Weathering led to the need for extensive replacement of large areas of brickwork. Unfortunately the use of stronger blue engineering bricks and cement mortar for repairs in the 1890s introduced additional problems.

Photo 7 cannot begin to convey the sensation obtained when looking through the series of openings in the piers, extending down and up the valley for more than ¼ mile.

Extracts from an 1840 Newspaper Report[1]

'The surrounding country is very picturesque, and is now heightened by such a work of art being placed in the midst of it. It forms not a slight cause for congratulation that the very spot on which the Viaduct stands furnished the materials of its construction. The bricks, to the number of eleven millions, were made from the adjacent soil, which now, applied by the skill of architect, has been elevated into a work of great utility and beauty.

'It was on one of the centre arches of this work of his skill that Mr. Maude, the resident engineer of the centre district of the railway, invited a party of gentlemen, including many of the officers and contractors of the Company, with some visitors from Brighton and Lewes, to witness the ceremony of keying the last arch. On the adjoining arches on each side were assembled the workmen who had been employed upon the edifice, to the number of 150, and a very fine body of men they were, and seemed to enter warmly into the feelings of their masters on seeing their labours so happily crowned with success. And here we would observe that throughout the whole line of works there was every sign of both contractors and men being prompted by the most active desire to carry on the undertaking with energy and perseverance. On all points there was an air of bustle, and no paucity of numbers or lack of zeal to carry into effect the conceptions of the designers. But to return to the ceremony:

'....All being now ready, Mr. Maude took the brick which was to complete the arch, and having deposited and secured it in its destined place, amidst the hearty cheers of all present, proceeded to address the surrounding company in the following terms : — Gentlemen and Friends, — At the commencement of all great works, particularly of such as this upon which we now stand, it is customary to lay the first or foundation stone with some little ceremony, so as to afford all friends of the undertaking an opportunity of expressing their joy at the commencement, and good wishes for the completion and stability of the undertaking. But how much more is it a source of rejoicement, gratitude, and festivity when the results of those labours are so nearly fully developing themselves as the work which you now see spreading itself before you; when each pier, having first shewn itself above the surface of the ground, has gradually crept up to its destined and aspiring height, and from the furthest extremities been gradually linked to its eternal partners by means of the salient arch ; when, in fine, we see those gigantic columns which till lately frowned at each other in solitary grandeur now form but a small part of a vast extended whole, we may indeed congratulate ourselves that we are now met for the celebration of so desirable an occasion.

'I will now endeavour, with the assistance of this plan, to give you a few principal particulars of the river Ouse Viaduct. It consists of two strong abutments and 37 arches, varying in height from 48 to 96 feet from the ground. The form of these arches is semicircular, each being 40 feet span, and of 15 feet raised side. Its entire length is 1475 feet, or rather more than a quarter of a mile. The width of the roadway is 28 feet, and in its erection upwards of 11 millions of bricks have been consumed, independently of about 400,000 feet of masonry in the foundation and elsewhere. The eye of a person travelling over it will, for a short time, be upwards of 107 feet above the level of the river, and 119 above the foundation or lowest point of the building. The superincumbent weight upon the centre arches is 1003 tons. By these data you will be convinced that this work yields to few — I may almost say to none— of the great master works of modern times. The first stone was laid in the middle of May last year, and in spite of the rainiest season known for years, it progressed steadily, although not above two-thirds of the estimated number of bricks required for the season's consumption could be made. Bricklayers were, however, kept at work through Christmas, till the frosts of last February made it advisable to close the work for a short season. As soon as the weather would permit the works were again commenced ; and in the report to the Directors in July last it was stated that the keying of the last arch (the operation you have just witnessed) would take place in February next. This, however, would have occasioned many of the arches to be built during the winter months, and, in consequence Mr. Rastrick most wisely came to the resolution of expediting the works by every possible means, so as to complete the whole of the arches before the severe weather of winter. At the time this resolution was come to— but the 12th of September last, — one only of the 37 arches was completed ; but, by the unwearied activity and ingenuity of Mr. Holman, the contractor, aided by a large body of bricklayers and carpenters, the work is now completed, being a period of ten weeks for the turning 36 arches, and but only eighteen months from the commencement of the work."

'Mr. Maude concluded by tendering his heartfelt thanks to the gentlemen present for the honour they had done him by attending, and was rewarded by a round of hearty .....'