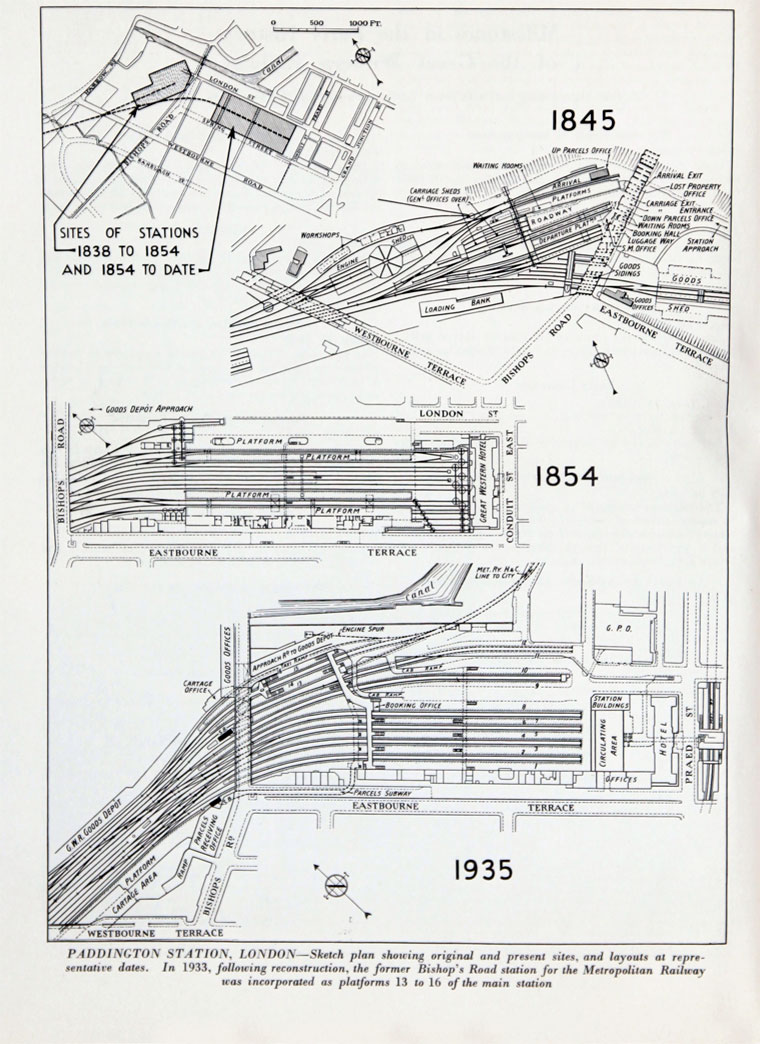 The first station to open in the Paddington area was a temporary terminus for the Great Western Railway on the west side of Bishop's Bridge Road.

The first GWR service from London to Taplow, near Maidenhead, began at Paddington in 1838. After the opening of the main station in 1854, this became the site of the goods depot.

The main Paddington station between Bishops Bridge Road and Praed Street was opened in 1854 and was designed by Isambard Kingdom Brunel. The glazed roof is supported by wrought iron arches in three spans, respectively spanning 68 ft, 102 ft and 70 ft. The roof is 699 ft long, and a particular feature of the original roof spans is the presence of two transepts connecting the three spans. It is commonly believed that these were provided by Brunel to accommodate traversers to carry coaches between the tracks within the station.

The Great Western Hotel was built on Praed Street in front of the station in 1851-1854 by architect Philip Charles Hardwick, son of Philip Hardwick (designer of the Euston Arch). The station was substantially enlarged in 1906-1915 and a fourth span of 109 ft was added on the north side, parallel to the others. The new span was built to a similar style to the original three spans, but the detailing is different and it does not possess the transepts of the earlier spans.

A very early construction by Brunel was recently discovered immediately to the north of the station. A cast iron bridge carrying the Bishop's Bridge Road over the Paddington Arm of the Grand Union Canal was uncovered after removal of more recent brick cladding during the complete replacement of the adjacent bridge over the railway lines at the mouth of the station.