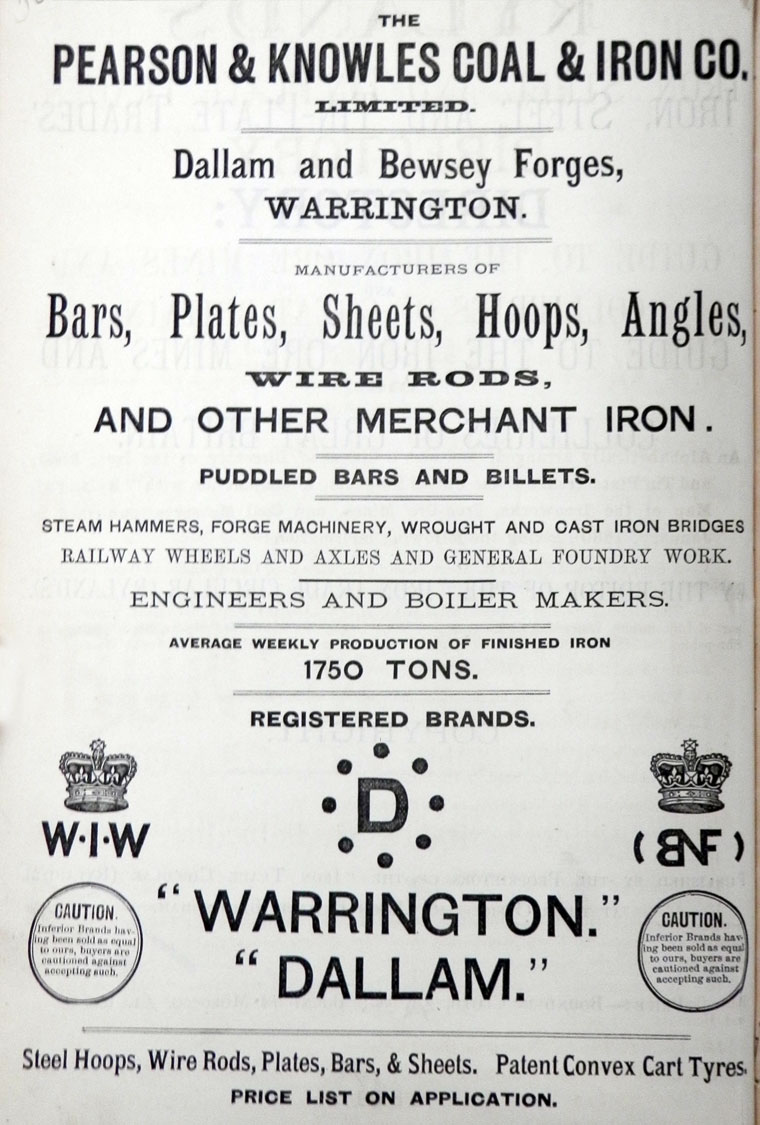 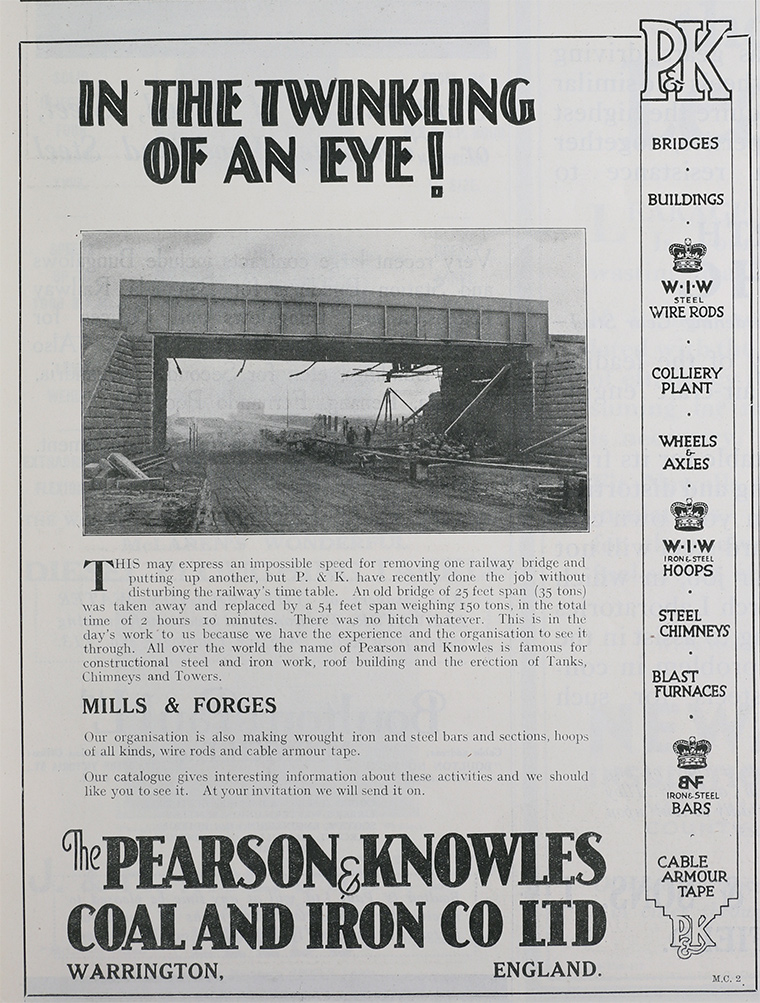 of Ince, near Wigan, and Dallam Forge, and Bewsey Forge, Warrington, coal miners and structural and general engineers.

c. 1854 Pearson took Knowles into partnership due to his business abilities

1871 Explosion at Pearson and Knowles' Moss Pit mine near Wigan (which coal field had suffered many such accidents in the past).

1873 Test at a Pearson and Knowles' mine of breathing apparatus to allow miners to work in atmosphere of "fire damp"[3].

1873 Took over the Dallam Forge, Warrington, and moved the ironworks to that site[4].

1874 The company Pearson and Knowles Coal and Iron Co was registered on 15 May, to acquire the properties of the firm of the same name (including five collieries) and the ironworks of the Dallam Forge and the Warrington Wire Iron Co[5].

1877 Rolling mill engines made by Pearson & Knowles featured in The Engineer, 11th May, 1877. The engine illustrated had a cylinder 30" diameter, 5 ft stroke. Flywheel 25' 6" diameter, weight 60 tons. There were four similar engines driving iron sheet mills and one driving a plate mill, at the Dallam and Bewsey forges.

1894 "Have done a large part of the structural ironwork on the Manchester Ship Canal". Gives list. [8]

1898 Closure of the Ince foundry due to increased use of steel rather than wrought iron; concentration of puddling work at Warrington.

1898 Pearson and Knowles' Iron and Engineering Works at Warrington were noted as having operated for many years a mutual scheme for compensation of workers who suffered an accident; a similar scheme was operated by Pilkington Brothers at St Helens[9].

1899 Locomotives were first built. A total of at least twelve and possibly eighteen built at this company over the next years[10]

1908 Large number of fatalities in explosion at Maypole no.1 mine near Wigan.

1909 The "acquaintanceship" with Rylands Brothers (a wire-rope working firm according to Aberconway) had provided a constant custom for the ironworks; that company was now treated as an affiliated concern in the accounts[12].

1911 The Company had established the Partington Steel and Iron Co to supply the steel needed by the rest of the Pearson and Knowles' company as well as supply the Sheffield market and other steel users; the new undertaking would have 3 blast furnaces; Pearson and Knowles took up some of the shares and the others were made available for public subscription[14][15].

1920 Offer from Sir William Armstrong, Whitworth and Co to acquire the ordinary shares of Pearson and Knowles Coal and Iron Co[17] which was largely accepted. Even so the company had to make an issue of debenture shares the following year[18].

1927 After several years depressed trade, a scheme of arrangement was proposed to deal with the company's debts, including the debts of the subsidiary companies[19].

1927 Sir William Armstrong, Whitworth and Co retained its interests in Pearson and Knowles Coal and Iron Co after the merger of other parts of the company with Vickers[20].

1927 See Aberconway Chapter IX for information on the company and its history.

1928 Substantial write-down of the capital in the company, which had some profitable parts but had particularly been dragged down by the debts of Partington Steel and Iron Co[21].

1930 Amalgamation of the Pearson and Knowles group of companies with the Wigan Coal and Iron Co and formation of 2 new companies to hold the coal and steel interests separately. The coal business would be called the Wigan Coal Corporation Ltd. The iron and steel business would be called the Lancashire Steel Corporation[22]. The companies were formed under the auspices of the Securities Management Trust, formed by the Bank of England to facilitate reconstruction of the iron and steel industry[23].

Formation of Pearson and Knowles Engineering Co to handle the construction and general engineering activities that had been developed over the past 60 years.

1953 The company was voluntarily liquidated[24].

'FIFTY-TON FLYWHEEL BURSTS. WORKMAN KILLED AND BUILDING WRECKED. The bursting of flywheel on Monday morning at the works of Messrs. Pearson's and Knowles, Warrington, caused havoc a hoop iron mill. The building was practically wrecked, and a workman named Fredk. Stockton, aged 23, was killed. Twenty others escaped injury. The wheel was about 20 feet in diameter, and weighed about 50 tons, and as the huge pieces flew about the mill the workmen had wonderful escapes.'[25]