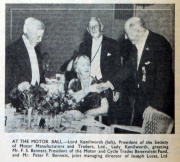 Born on 16 April 1880 at Dartford, Kent, the eldest son of Frederick Charles Bennett, a carpenter, and his wife, Annie Eliza Blaker.

c.1892 The family moved to Birmingham, where he was educated at Five Ways grammar school of the King Edward's Foundation.

On leaving school, Bennett worked for a time with an electrical company in India.

1903 he joined the Electric Ignition Company of Sparkbrook, makers of sparking plugs, trembler coils, and switches.

1907 with Thomson's backing, set up Thomson-Bennett to manufacture products similar to those of the Sparkbrook firm. Thomson-Bennett began making magnetos for specialized purposes. The German company Bosch had a virtual monopoly of the car magneto market.

1914 Thomson-Bennett had c.100 employees when it was acquired by Joseph Lucas Ltd, particularly for their magneto expertise.

WWI Bennett was appointed chairman of the two bodies set up to co-ordinate magneto producers, the Aero Magneto Manufacturers' Association and the British Ignition Apparatus Association. Within the Lucas concern Thomson-Bennett was run as a separate business under Bennett as managing director.

1923 In partnership with Oliver Lucas as joint MD, Bennett expanded the company.

Peter Frederick Blaker Bennett - (Lord Bennett of Edgbaston), who was for many years Chairman and Joint Managing Director of Joseph Lucas, Ltd., Birmingham, was born in Dartford, Kent, in 1880, but came to Birmingham at an early age where he attended King Edward's School at Five Ways.

After spending some time in India as a young man he returned to England and in 1907, on his twenty-seventh birthday, founded the firm of Thomson-Bennett, manufacturing ignition magnetos in Birmingham. Thus began a lifelong association with the automobile industry of the Midlands.

In 1915 his firm was acquired by Joseph Lucas, Ltd., and Mr. Bennett (as he then was) immediately took an active part in the management of the firm which grew under his leadership to one of the largest industrial undertakings in Britain.

This growth and success were in large measure due to his commercial sagacity, his steadfastness of purpose and above all to his knowledge of human nature and his sympathy with, and understanding of, the men who worked for him.

Although the work involved in directing the affairs of a large and growing organization might well have claimed all his energies he found time from the earliest days of his business life to devote to work of a public nature, both charitable and national. Like his father before him he took a keen interest in the affairs of the Y.M.C.A. and was the Birmingham President of the Association for a long period. He was also keenly interested in the Scout movement and served as County Commissioner for Warwickshire for many years. He was Midland Chairman of the Motor and Cycle Traders Benevolent Fund and later National President.

On the industrial side he served at various times as President of the Federation of British Industries, the Society of Motor Manufacturers and Traders, the British Productivity Council and the Birmingham Chamber of Commerce; his contribution to the wellbeing and development of industry, particularly in the Midlands, was an invaluable one.

In the 1914-18 war he played a vital part in the supply of magnetos to the Services for which he was awarded the O.B.E., while in the 1939-45 war he gave distinguished services to the Ministries of Supply and of Aircraft Production and was closely associated with many aspects of the supply of munitions.

In 1940 he entered Parliament and served as member for Edgbaston for 13 years during which period he received a Knighthood. During 1951-52 he served as Parliamentary Secretary to the Ministry of Labour but had to resign this office owing to ill health. His elevation to the peerage took place in 1953.

He took a great interest in the University of Birmingham of which he was a Governor and from which he received the honorary degree of LL.D.

Despite his distinguished career and many honours Lord Bennett remained to the end a man of modest ways and simple tastes with a love of open air pleasures. It was doubtless this simplicity of outlook combined with his knowledge and understanding of his fellow men which so endeared him to all with whom he came in contact.