No 19 MkII Radio Set. Made by Philco. 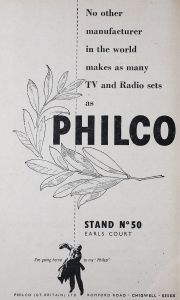 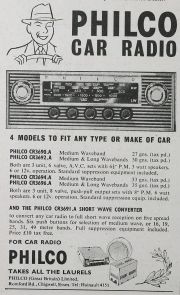 1892 Philco was founded as Helios Electric Company. From its inception until 1904, the company manufactured carbon-arc lamps. As this line of business slowly foundered over the last decade of the 19th century, the firm experienced increasingly difficult times.

From 1920 to 1927, all radios were powered by storage batteries which were fairly expensive and often messy in the home.

1925 Introduced a product called the "Socket Power Battery Eliminator" - this was a rectifier unit that allowed users to operate their battery-powered radios from standard light or wall socket. By 1927 over a million of these units had been sold. However, the invention of the vacuum tube rectifier (incorporated into the coming 1928 line of radio sets) made this technology obsolete.

1926 Philco decided to begin making radios. The first Philco radios were introduced in mid 1928, and 96,000 were produced that year, making Philco radios 26th in the nation in production volume. Up to that time most radios were handmade and priced for relatively wealthy consumers. Atwater-Kent, the leading radio seller, coincidentally was also located in Philadelphia.

The Philadelphia Storage Battery Company decided that prices of radios could be scaled for a mass market by incorporating assembly line techniques then only used by the automobile industry. By the 1929 model year Philco was in third place behind Atwater-Kent and Majestic (Grigsby-Grunow Corp) in radio sales. In 1930 the company sold 600,000 radios, grossed $34 million, and was the leading radio maker in the country. By 1934 they had captured 30% of the domestic radio market.

Philco radios were notable for their economy of design without sacrificing quality or durability. Like other makers of the era, they offered a wide line of radios beginning with five-tube sets all the way up to high-fidelity consoles with 20 tubes in 1937-38. Philco also made battery-powered radios which were by then called "farm radios", most of which had cabinets identical to their AC powered versions. The Philco "Baby Grand" (today called "Cathedral" radios by collectors) was a shape that featured an arched top that wrapped from the sides over the top. This was for economical reason partly, as one piece of wood formed both the top and sides. Philco sold far more of this style than any other maker, a total of over two million (in over twenty models, with from four to eleven tubes) from 1930 to 1938; many of them exist today in collections. By today's standards, most of them are still excellent performing AM band radios when restored.

1931 The Philadelphia Storage Battery Corporation established the P.R.T. Corporation in London, England, to handle the sale of Philco radios.

1936 The Philco Radio and Television Corporation of Great Britain was incorporated as a public company to acquire as a going concern the British assets of the P.R.T. Corporation [1]. Public offer of shares.

Supported the Gemini and Apollo programmes