Grace's Guide is the leading source of historical information on industry and manufacturing in Britain. This web publication contains 150,137 pages of information and 235,416 images on early companies, their products and the people who designed and built them. 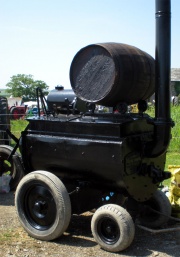 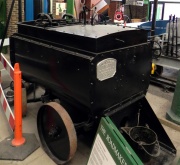 1944. Tar and bitumen boiler. Built for them by MacFarlanes of Glasgow. Exhibit at Amberley Working Museum. 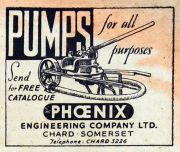 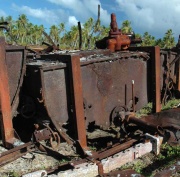 1891 November. Company incorporated in November 1891 to acquire the business and assets of the Phoenix Iron Foundry from the Smith Brothers. The latter company had been in business since 1839. The freehold of the iron foundry had belonged since 1884 and remained with Edward Rusk, a London financier, who was the majority shareholder in Phoenix. The balance of the capital was held by a number of London based engineers including early members of the Jennings and Pownall families. The original directors were Edward Rusk, Robert Bolger Pownall and Charles Harris, the company secretary was Thomas John Jennings.

The company continued the same product lines as the Smiths but added their own range of municipal plant, such as pumps, water tankers and night soil carts. In addition the company produced pumps for the Pulsometer Engineering Co, where Thomas Jennings had previously worked, to be sold under the Pulsometer name.

Between 1891 and 1904 the company made an annual profit only twice and it was decided as a result to reorganise in 1905. A new company was set up, confusingly called The Phoenix Engineering Co. Ltd. to acquire the old company, which was then liquidated, and the freehold of the Phoenix Iron Foundry from Edward Rusk's estate, the latter having died in February 1905. The shareholders of the old company were issued shares in the new company on a one-for-one basis giving Edward Rusk's executors control.

At around this time the company developed a range of bitumen heaters and sprayers under the "Rapid" trade mark.

In 1909 an agreement was signed with Llewellin and James of Bristol, at the time one of Phoenix's biggest competitors, whereby the latter agreed to buy all its tar boilers from Phoenix and that the two companies would sell their boilers at the same price.

The company prospered during the First World War, when it produced agricultural equipment, and after, finding a ready market for its bitumen equipment and pumps in the British Empire. This was to prove the basis of the company's strong continuing export sales.

The company was badly hit by the recession of the 1930s as public spending on roads was cut back in Britain and elsewhere in the World. H

The Second World War caused a tremendous demand for the company's equipment and the War Department "gave" the company a subcontractor in Glasgow for the production of bitumen boilers. During WW2 the company's range of products concentrated on bitumen equipment, pumps and, temporarily, field kitchens.

In the early 1960s the original foundry was closed and as a result the manufacture of pumps ceased. But as one product range was killed off another was born. In 1960 John Pownall developed the concept of the self propelled chipping spreader and today the descendants of this machine and of the bitumen heaters and sprayers represent the vast majority of the company's sales.

Throughout the 1970s the company concentrated on its export sales and in 1977, at the height of the oil boom in the Middle East and Africa, won the Queen's Award to Industry in recognition of its achievements in the export markets.

In recent years exports have averaged 65% of sales and in 1997 the company again won the Queen's Award to Industry for Export Achievement. During the current year the company has supplied Chard made machinery to Australia, the West Indies, and Japan as well as to its more usual markets in Western Europe, Africa, the Middle East and the Far East.

The story continues as the company nears its 122nd birthday still run by descendants of the original founding families.