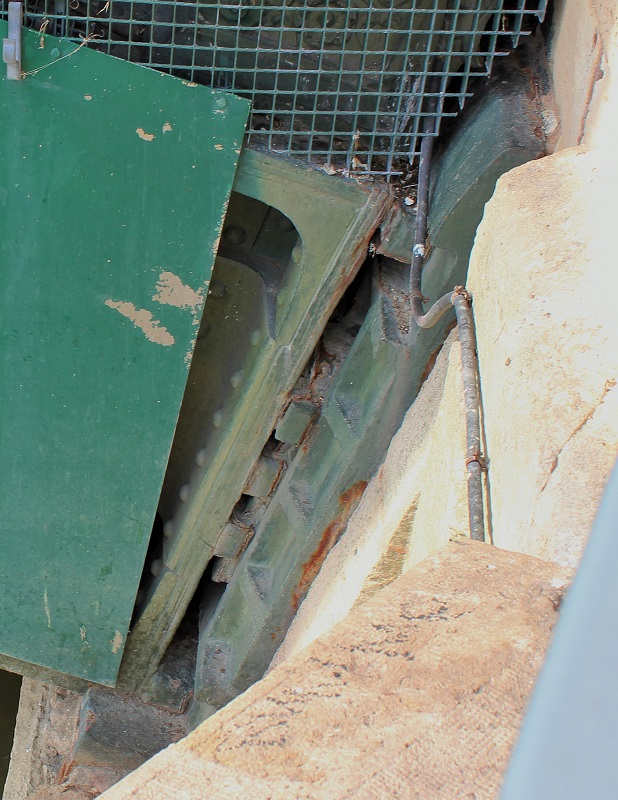 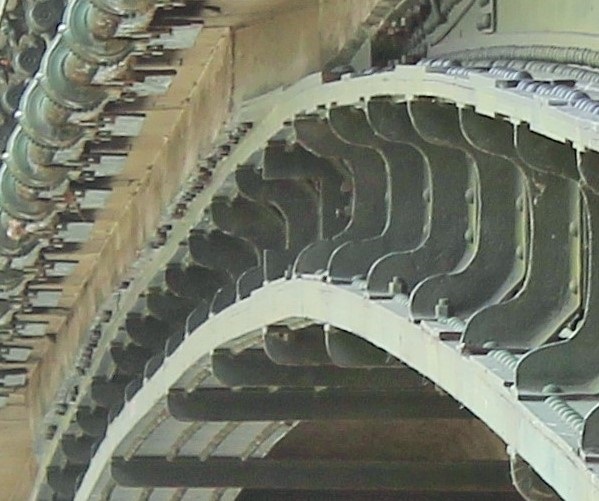 Crosses the River Seine in Paris.

The arch ribs are assembled from riveted wrought iron plates with angle iron and T-section stiffeners.

The bridge suddenly sagged during a cold spell in 1888, necessitating repairs and modifications. Comparison of photo 2 with an 1870s photograph here shows that one of the changes was the addition of two arch ribs. Originally there were 12 arch ribs, 10 ribs being grouped together under the roadway, and an arch rib either side of these, pitched further out (in the plane of the balustrades). The 2019 photo above shows that there are now 14 arch ribs, the extra ribs flanking the central group under the roadway.[1].

Gustave Eiffel wrote about the failure [2], and a translation of the relevant text follows (with original text in brackets where the precise English equivalent is unclear]:

'But we had the unfortunate idea of ​​tyeing the upper rails [longerons supérieurs] to the masonry, so that the construction worked both as an arch and as two [consoles] abutted at their ends. As the tie-rods [tirants d'amarrage] failed due to cold contraction and possibly rusting, the arches began to move in full and deformations occurred that would require a complete reconstruction of the bridge, especially in the vicinity of the [clef].' The word 'clef' is problematic here. It literally translates as 'key', but it probably refers to the crown of the arch, as will be explored shortly.

The statement 'As the tie-rods failed due to cold contraction and possibly rust' together with the comment by Frédéric Bourgeon that the top beams were originally connected to the abutments perhaps refers to the wrought iron beams which supported the deck, seen in photo 3 above, immediately below the new concrete deck. Photo 3 shows that the end of the beam no longer connects with the masonry abutment.

Another source, Jean Resal, offers more information[3]. It does seems to confirm (with apologies for imperfect translation!) that the top beams were embedded in the masonry. The combination of arch, upper beams, and spandrels represented a stiff structure, and together with the lack of articulation of the arch, the structure was susceptible to the effects of thermal expansion. Deterioration progressively occurred as the the bridge expanded and contracted, and after 33 years failure (of a top beam?) occurred during a particularly cold morning when a line of carts was crossing the bridge. The failure did not lead to disaster, but the arch dropped appreciably due to the increased thrust imposed upon it. Repairs included fitting additional plates to reinforce the central portion of the arch. Photo 6 shows the relative thickness of the flanges, composed of numerous plates riveted together.

M. Resal records that the rise/span ratio of the arch was 5.70m/80m = 1/14, and that the depth of the rib was 0.40m at the 'clef' and 1.40m at the 'naissances'. Clearly the naissances are the springing points at the abutments, and the clef is the centre of the arch. 0.40m is remarkably shallow, and the relative shallowness is evident in photo 2.

It is interesting to compare this bridge with the Pont Alexandre III, further downstream. This has an even longer span and flatter arch (rise/span ratio of just 1/17). It was built over 50 years later, and the design avoided the thermal expansion problems of the Pont d'Arcole. The arches are hinged at both the springing points and at the crown. The deck is supported from the arch ribs by vertical struts, not by triangulated struts and ties as on Pont d'Arcole. There are appreciable differences aesthetically, the decoration of the Pont d'Arcole being tastefully restrained, whereas the Alexandre is festooned with festoons and other high Victorian excesses, which serve to hide the work of the engineers.

The lack of hinges at the ends of the arch rib is evident from photo 4. Such an arrangement followed long-established practice for large cast iron arch bridges. J. G. James[4] observed that in 1818 problems due to thermal movement came to prominence on Rennie's Southwark Bridge, and that on some cast iron arch bridges in Yorkshire the ends of the ribs and their bearings were curved to facilitate movement.