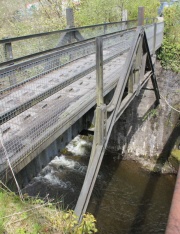 2. Note the dovetail and mortise & tenon joints packed out with wood. The bolted 'trough' can be seen beneath the deck 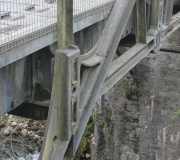 4. This might be described as a 'cylinder and socket' joint, the spaces being packed with wood 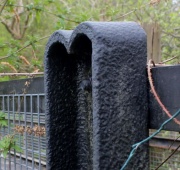 5. Does this echo the heart motif used on some of Watkin George's cast iron structures?

or Pont-y-Cafnau, in Merthyr Tydfil

'Bridge' in the title is added for clarity, as the name Pont-y-Cafnau literally means 'Bridge of Troughs', the troughs being aqueducts.

This remarkable bridge is the oldest surviving example of a cast iron railway (tramway) bridge and aqueduct. It was designed by Watkin George and is provisionally dated to 1792 - 93.[1] Beneath the tramway deck is an aqueduct.

It originally supported a second aqueduct, made of wood, carrying water at high level across the River Taff to Watkin George's great Aeolus waterwheel at Cyfarthfa Ironworks. The arrangement can be seen in the last illustration (This is an enlarged detail from a 'Cyfarthfa & Hirwain Iron Works' £1 note displayed in the café at Cyfarthfa Castle).

It is probably the second oldest surviving iron bridge in the British Isles (after Ironbridge). It is also the first cast iron aqueduct.

The basic arrangement follows wooden roof truss design principles, and is perhaps the earliest iron bridge in which cast iron members were intended to be put in tension. The detailed design is impressive. The joints are packed with hardwood. It is not known whether the main aim was to provide some compliance in the joints as a safeguard against overloading in the event of, say, foundation movement, or whether it was to facilitate construction in the event of misalignment. Given the even thickness of the packers, it appears that the alignment was carried out very satisfactorily. No doubt the foundry would have found the detail design very satisfactory, too, care having been taken to minimise the risk of problems due to shrinkage.

The aqueduct is a closed box section. The weight is taken by five support positions: the abutments at each end; each of the diagonals (Photo 3); the kingpost/horizontal member junction (Photo 2). At these intermediate positions there are brackets bolted to the side of the aqueduct with projections which locate in holes in the support members (via wooden packers), and there are also support beams running transversely below the aqueduct floor, supported in the same way as the side brackets.

The basic arrangement and the use of dovetail and mortice and tenon joints might reflect timber construction, but there the resemblance ends. Unlike Ironbridge, whose cast iron members are of generally of rectangular cross section, those on Pont-y-Cafnau are of channel or angle section. This perhaps gives the bridge its deceptively modern appearance. In fact the bridge represents an early use of efficient cast iron sections.