2019. The curved sandstone plinths in the abutment original supported the 1823 Carlisle Canal 'drawbridge' 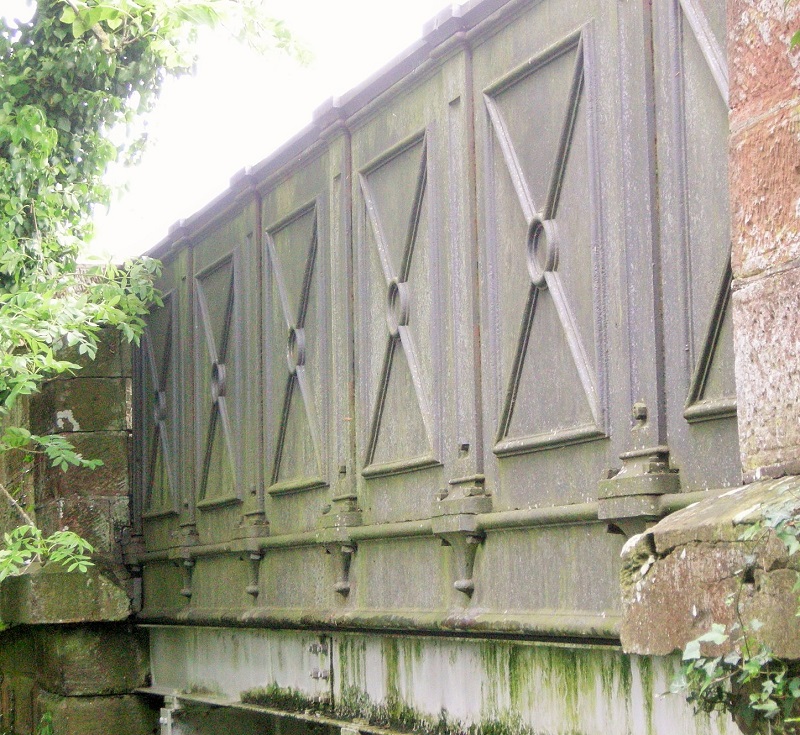 The Carlisle Canal was opened in 1823 from the Solway Firth at Fisher's Cross (renamed Port Carlisle) to a basin in Carlisle. The canal was 11¼ miles long, with six locks.

The canal was unsuccessful, and it was decided to convert the route to a railway. The canal closed in 1853 and the railway opened for goods traffic on 22 May 1854 and passenger traffic on 22 June 1854 (a test train had run over the route in February [1]). The line followed the alignment of the canal except at Kirkandrews where a curve avoiding low-lying ground was smoothed out by building an embankment. There were short sharp gradients corresponding to the six former canal locks, and unusually tight curves. The new railway was initially worked with a single locomotive and a single train by the Newcastle and Carlisle Railway, but the company acquired a tank engine of its own in 1855, a second engine being purchased in 1856.

In 1857 locomotive traction was withdrawn, and horse traction introduced on passenger traffic on the branch. The first coach was obtained from Bartons of Carlisle, but it was replaced in 1859 by "Dandy No. 1" (now preserved in the National Railway Museum). In 1863 the "New Dandy" replaced it, and in 1900 "Dandy no. 2" was brought in.

In 1854 a parliamentary bill was introduced to make a dock at Silloth and a railway 12.75 miles long to it, branching off the Port Carlisle line near Drumburgh. The railway opened on 28 August 1856.

After remedial work on the track on the Port Carlisle branch, it reverted in 1914 to locomotive operation of passenger and goods traffic. A Sentinel steam railcar was introduced on the line in 1929 as an attempt to reduce the cost of passenger train operation, but passenger use was light and passenger services on the branch were withdrawn on 31 May 1932, with complete closure in 1964.

The above information is condensed from the excellent Wikipedia entry for the Carlisle and Silloth Bay Railway.

Surviving artefacts include the sea lock at Port Carlisle and a number of road bridges which originally crossed the canal, but were altered to accommodate the railway.

Where the railway took over the route of the canal in 1853-4, movable bridges ('drawbridges') were replaced by road bridges with embankments to take the road over the railway. Several (three?) of these have survived, with the original cast iron parapets, and with modern steel beam decks and steel columns replacing earlier wooden structures.

In some cases different names are given for the same bridge locations, which include Drumburgh, Glasson, West Green, Burgh by Sands, and Dykesfield.