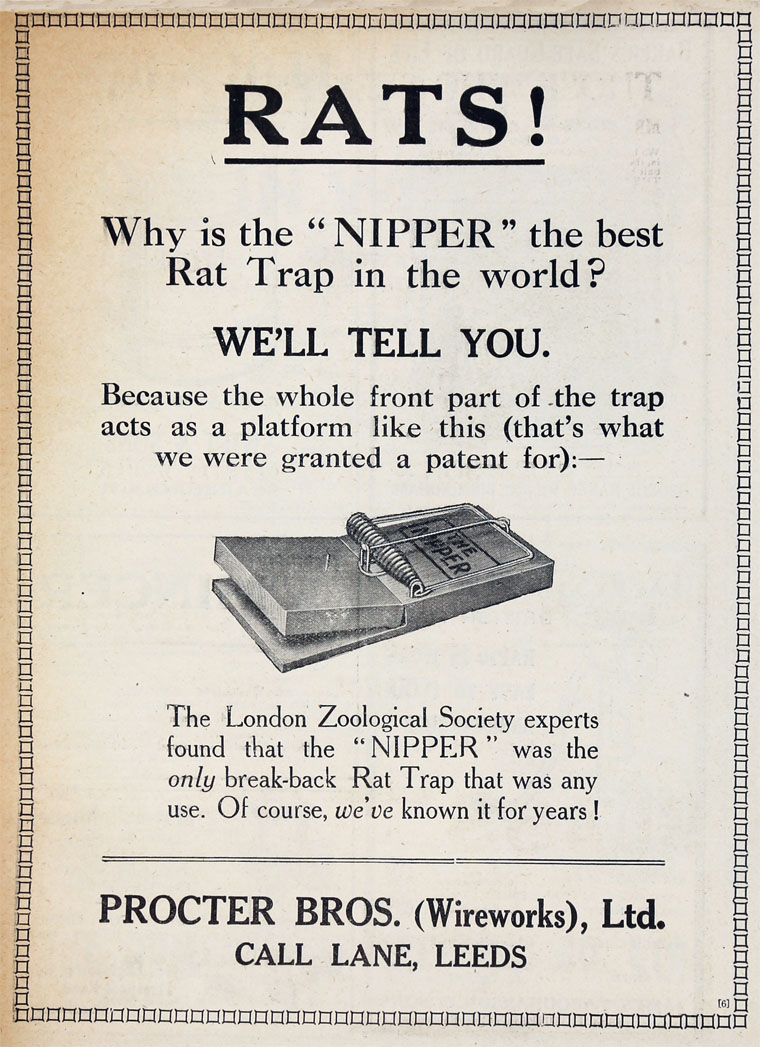 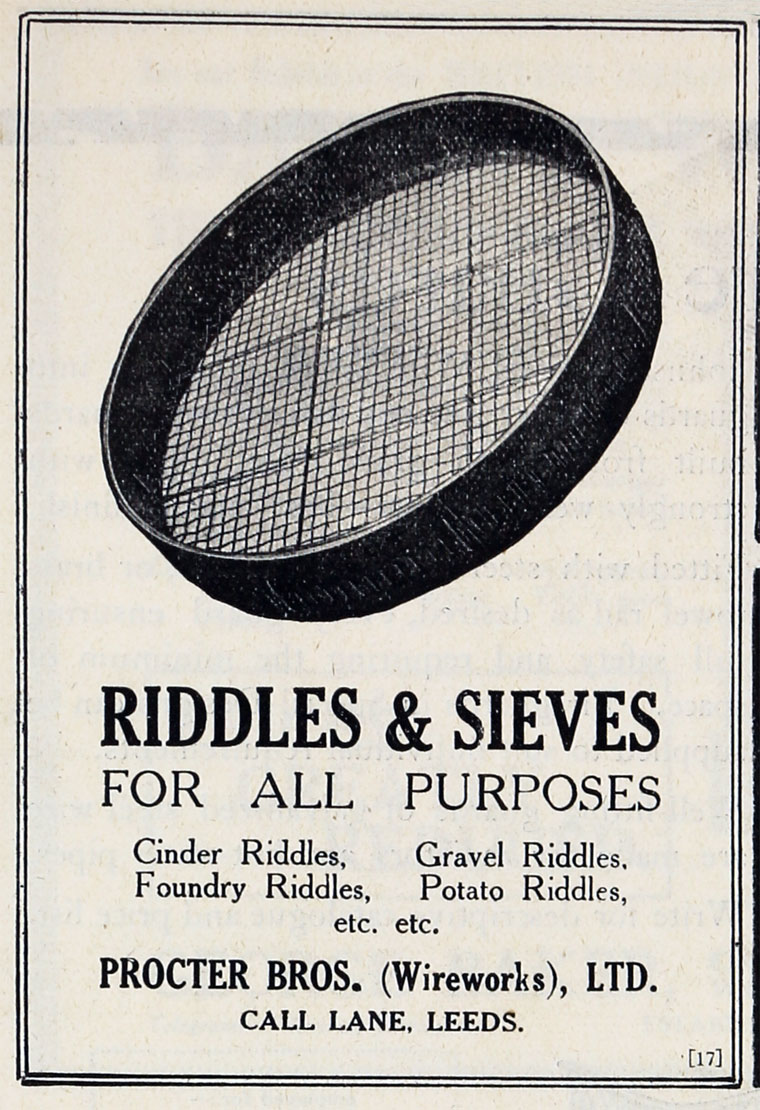 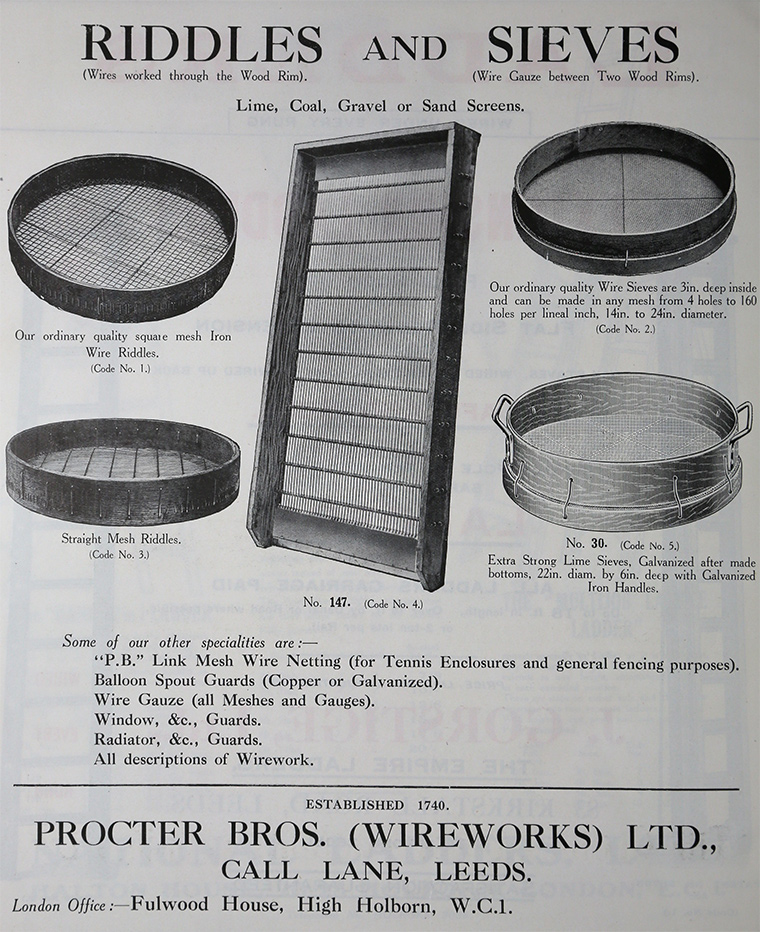 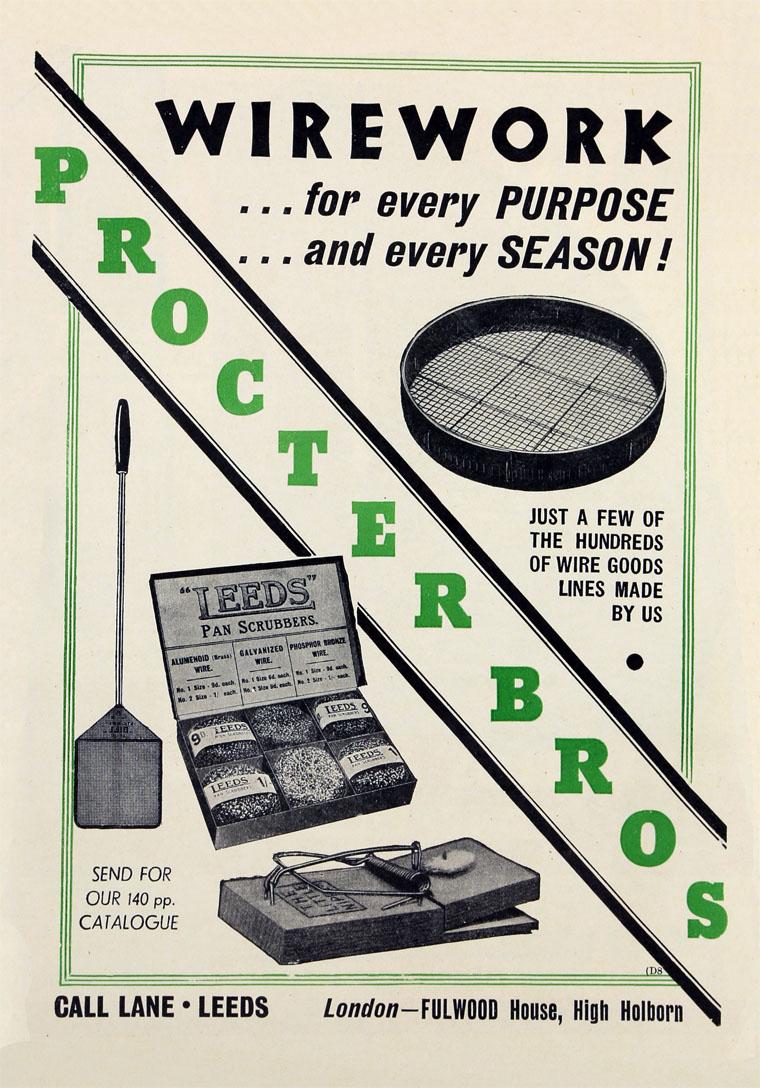 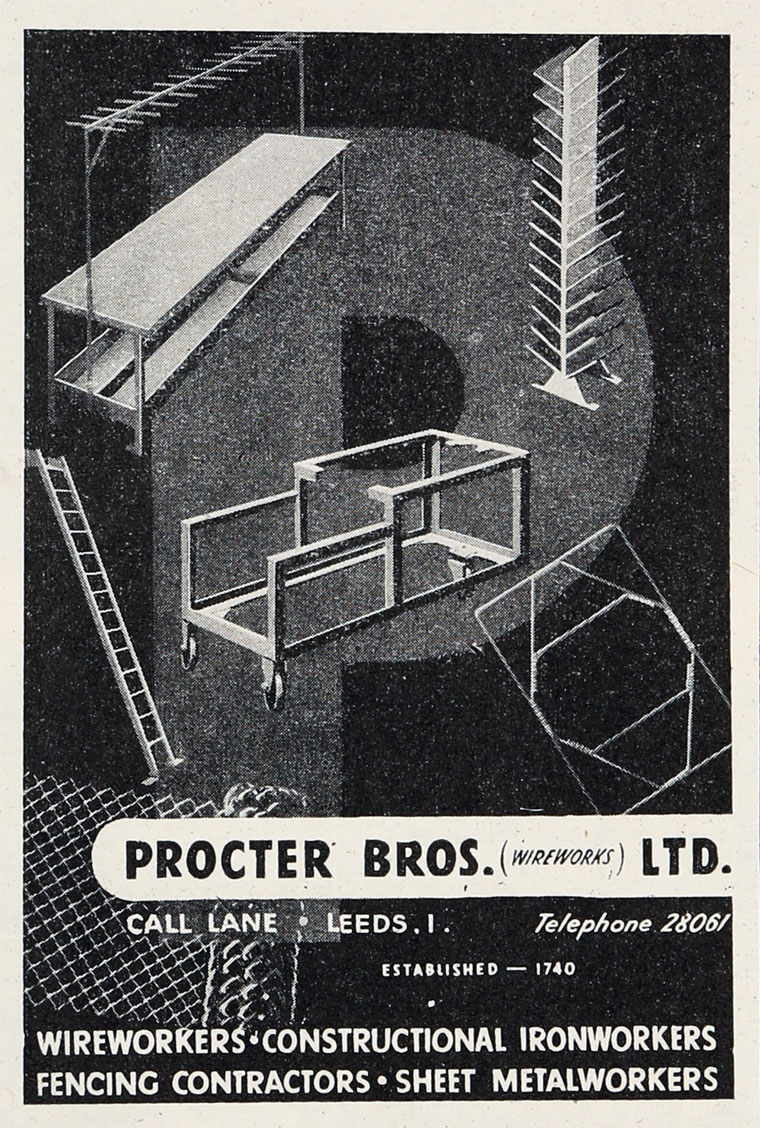 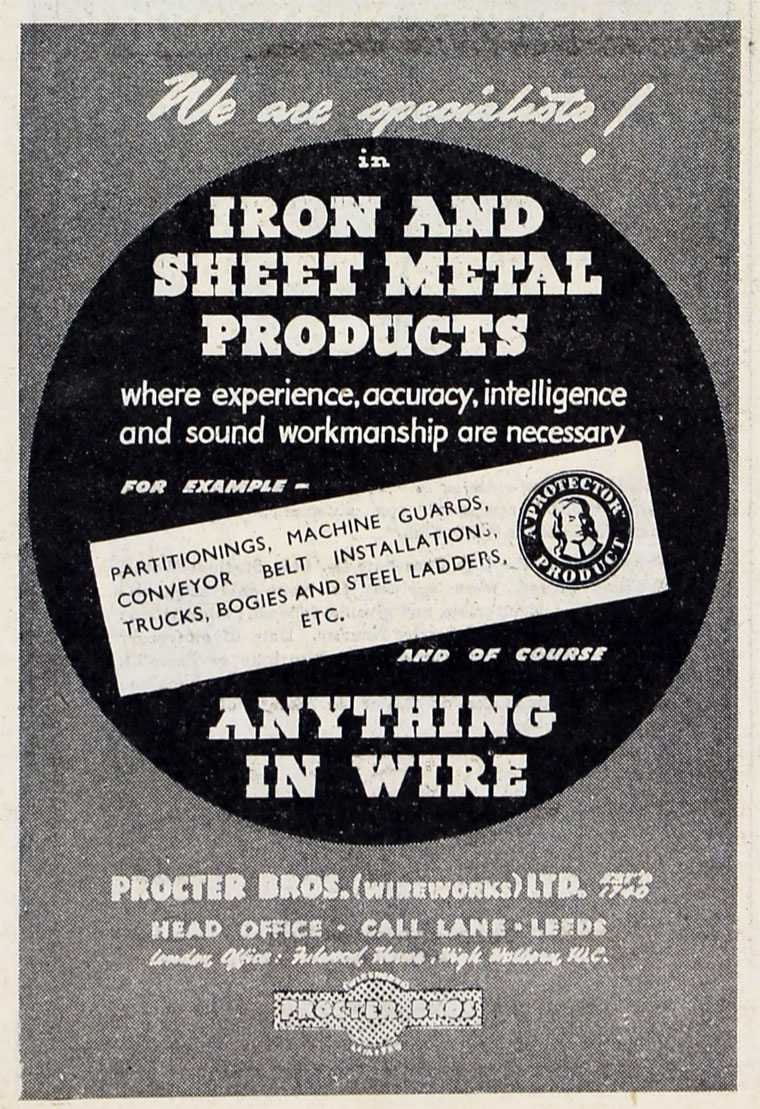 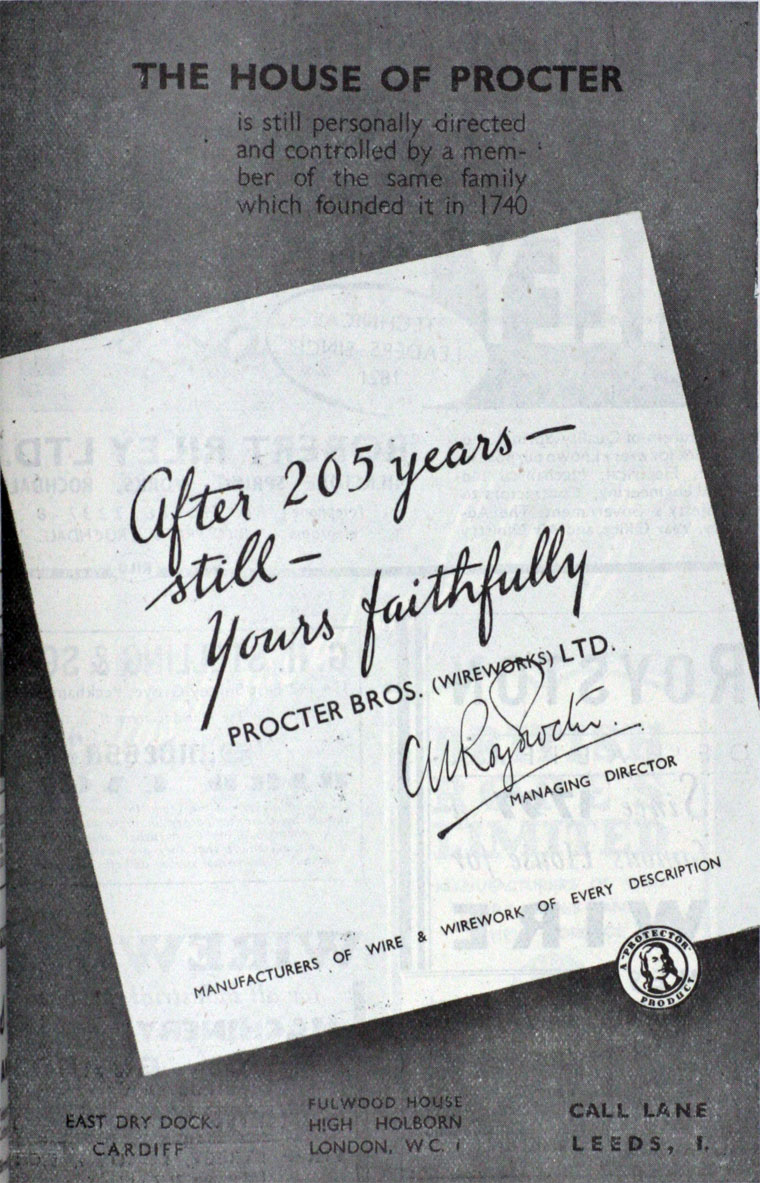 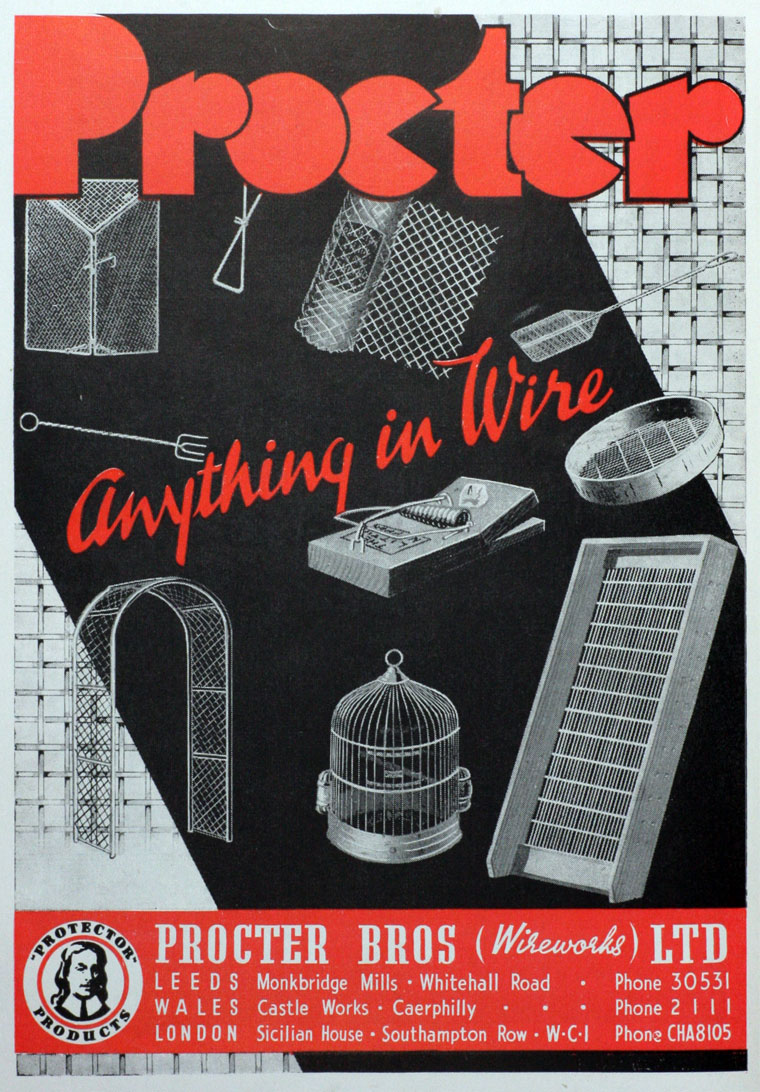 1740 The original company was established by William Varley.

During the 18th and 19th centuries, the business was mainly involved in the manufacture of a wide range of agricultural and domestic wire products from a number of small factories in Yorkshire.

1884 The trading name of Procter Brothers was introduced by John Procter and Charles Procter, and it was under their control that the company began to develop its identity as specialist wireworkers.

1897 James Henry Atkinson of Leeds invented a better mousetrap which he named The Little Nipper. He asked Procters to manufacture these for him.

1913 The company purchased the rights to the mousetrap for £2,000. This was the start of their comprehensive range of domestic pest control products.

WWI. With the outbreak of the First World War, the company had gained considerably in stature and was involved in numerous government contracts, particularly the supply of strong woven wire for use as a bomb proof guard over the roof of Buckingham Palace.

1920s/30s The company continued to develop its manufacturing base, with a wide range of products such as machine guards, riddles, sieves, fireguards and wire fencing being produced.

WWII. During the Second World War, output was dramatically changed, with the company supplying the military with parts for Bailey Bridges, parachute frames, and special wiremesh suitable for aircraft landing strips in sandy or marshy locations, as well as fencing for virtually all the country’s aerodromes. A factory was established in Cardiff and later moved to it’s current site at Bedwas.

Post-WWII. After the war, the company reverted to its pre-war manufacturing base, supplying both the retail and industrial sectors through the fifties and into the early sixties.

1960s In the mid-60s, the business was restructured to concentrate exclusively on the specialist fencing and machine guarding sectors of the industry, while continuing to manufacture its famous Little Nipper mouse and rat traps.

From its sites in Garforth, near Leeds, and Bedwas in South Wales, the company now produces its nationwide fencing and guarding services that integrate traditional skills with modern techniques and services.

Contracts in recent years include the railings and ornamental gates of Kensington Palace, major guarding projects for the London Underground Jubilee Lines and, in the USA for Ingersoll’s Chrysler project. New products have been introduced to the range of the traps department and at Garforth a range of Castone architectural features supplements its traditional fencing products.