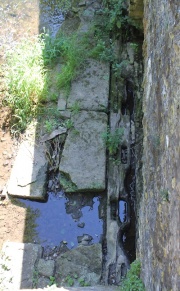 2. Upstream side of western arch. Note the slots in the wooden cill insert - possibly for sluice gates? 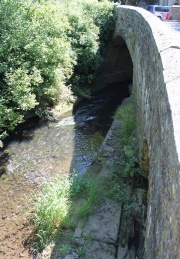 4. Footbridge for footpath. Grave of Acker Bilk in foreground

No longer extant as a mill.

This was one of several mills served by the River Chew between Pensford and Keynsham.

This entry also relates to the bridges at Publow, one of which crosses the River Chew.

Bt 1731 the Coster family had taken over a former iron or plate mill at Publow, at one time described as a frying pan works. They converted the premises to roll copper, but later undertook copper refining and making batteryware. After 1860 the site became a farm - now called Church Farm - retaining some of the buildings.[1]

The mill was visited in 1754 by the Swedish industrial spy R. R. Angerstein[2]. He described it as the Publowe copper forge belonging to Mr. Percival and Co (Joseph Percivall and Copper Co), where copper plates for large distillation vessels, etc., are forged.

1761-2 A new furnace was constructed in 1761, and a new clayhouse in 1762. Note: Under the ownership of Percival & Co, three distinct processes - copper refining, rolling, and battery work - were undertaken at the mill[3]

Today a wide, shallow depression can be seen between the churchyard and Church Farm (the site of the mill). However, the course of the leat from the bridge through the churchyard cannot be determined, although the three-arch stone bridge for the footpath must be associated with the leat. The farm itself has a number of new and old buildings and a farmhouse. One can be clearly ascribed to mill use: this is a rectangular stone building very close to the river (eastern end of the site), currently (2016) being coverted for domestic use. Below the current ground level is an arched opening in the wall on the river side, followed by a short depression which was clearly an outfall from the mill.

The next mill downstream is Woollard Mill. Copper slag can be found in the River Chew immediately upstream of this mill. Presumably this has been washed downstream from the Publow Mill following its refining activities.

The bridge over the river, located upstream of the mill site, is mediaeval in origin, but has been altered several times. One or more of the alterations may have involved adapting it to meet the the water supply needs of the mill. It was renovated in 2006. It is substantially built and has two arches spaced well apart. The western arch incorporates a weir (Photos 1 & 2). The skewed eastern arch (Photo 3) now takes the normal flow of water, but presumably served the mill leat originally. There is a datestone (1810) on the northern parapet. Joan Day noted that one of the keystones bears the inscription 'JF&Co 1799', referring to John Freeman and Copper Co

Immediately south and east of the river bridge is a small three-arch bridge (Photo 4) carrying a footpath leading to the mill site.