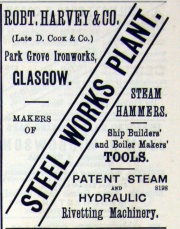 Around 1870, James Cook, nephew of James Cook, who had been long in his uncle's employment, together with Robert Harvey, Senior, established a new firm Robert Harvey and Co which took over the firm of D. Cook and Co.

c.1870 Robert Junior returned to Glasgow to join his father as manager and partner in the business

1879 Advert: 'The Copartnery of ROBERT HARVEY & COMPANY, carrying on Business as Engineers and Machine Makers at Parkgrove Iron Works, Kinning Park, Glasgow, of which the Subscribers, ROBERT HARVEY, SENIOR, ROBERT HARVEY, JUNIOR, and WILLIAM MURRAY HARVEY, were the sole Partners, was DISSOLVED by mutual consent upon the 1st day of July, 1879, being the date of the expiration of their Contract of Copartnery.
The Business has since then been and still is carried on by the said ROBERT HARVEY and WILLIAM MURRAY HARVEY, for their own behoof, under the old Company assignation.
ROBERT HARVEY, SENR.
ROBERT HARVEY, JUNR.
WILLIAM M. HARVEY.
J. Jackson, Clerk-at-Law, 120 West Regent Street, Glasgow.
Witness. Thomas Duncan, Apprentice-at-Law, West Regent Street, Glasgow. Witness.' [1]

c.1880 On the retirement of Robert Harvey, Senior, his son Robert took over and developed the business.

NB at this time Crow, Harvey and Co was of the same address.

1905 Renamed as Harvey Engineering Company, Ltd, makers of sugar machinery and erection of central sugar factories, with a high reputation in all sugar-producing countries.