A remarkable survivor: tramway bridge at Upper Redbrook, built 1810-12 by the Monmouth Railway Co to bring coal from the Forest's mines for shipment on the River Wye

Penallt Viaduct, built in 1876 by the Wye Valley Railway. A footbridge is attached to the old bridge 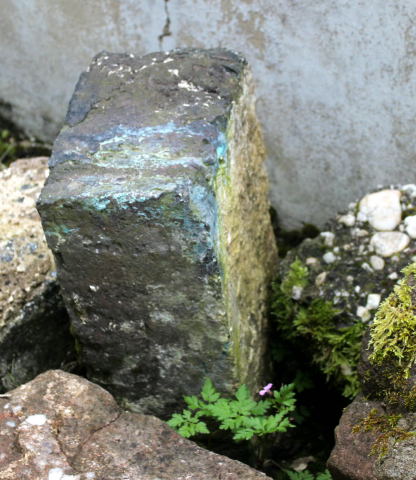 This entry serves as a marshalling point for the variety of industrial activities in Redbrook, on the River Wye in the Forest of Dean (Glos.)

Manufacturing in Redbrook was dominated initially (17th C.) by copper works, and later by tinplate works at Upper and Lower Redbrook. The works at the two sites had a had a long and complicated history, and were at times interlinked. Where information relating to the separate works can be distinguished, it is presented in the entries devoted to Redbrook Ironworks, Redbrook Tinplate Co and Redbrook Copper Works.

Given the Wye Valley’s status as an Area of Outstanding Natural Beauty, it is difficult to imagine the presence of heavy industry here, but the need for imagination is reduced by the collective Wye Valley authorities' provision of superb display boards describing an illustrating aspects of the lost local industries. There are two at Redbrook, one devoted largely to copper production, the other to tinplate (see photographs).

The villages of Upper and Lower Redbrook, were defined by two water courses and their narrow valleys. Little evidence remains of the important Lower copper and tinplate works, but Upper Redbrook offers more scope for the seeker of industrial remains.

In the book 'The Industrial History of Dean'[1], Dr Cyril Hart provides a sketch map showing the various historic industrial sites at Redbrook. Upper Redbrook is shown to be served by seven ponds. Two of these have survived. Just downstream of the two highest ponds (one being named Swan Pool) was a 17th century blast furnace (Upper Furnace). The next pond downstream served Upper Corn Mill. Then followed another pond followed by Redbrook Flour Mill. Slightly to the north and west was a brewery. A larger pond followed, which had served the 17th C Lower Furnace, and a foundry and separate stamping mill (both 18th - 19thC.). Another pond followed, above a malt house, and this pond supplied a leat running to King's (or Quick's) corn mill (later Wye Valley Corn Mills). This lead ran alongside the final pond, which stopped just before the tramway incline. Below here was the 19th - 20th Redbrook Brewery, and then the Upper Copper Works (17th C.) which later became the Upper tinplate works. The leat which served King's corn mill then went on to supply the Lower copper and/or tinplate works. In passing, it may be mentioned that the border between England and Wales meanders along this area of the valley.

At Lower Redbrook, the sketch map shows a much simpler picture, with a small group of buildings shown as the 17th C. Lower Copper Works and the later tinplate works. These were served by three ponds supplied by the Valley Brook (and also by the leat coming from Upper Redbrook). It should be noted that the upper pond is named Forge Pool, downstream of which is Forge Cottage and Forge Wood.

'Melancholy and Fatal Accident the Upper Redbrook Brewery, Monmouth. —It is our painful duty, this week, to record a most distressing accident that befel a man named Edward Brown, a native of Monmouth, in the employ of the Messrs. Hall, of Redbrook. It appears that, on Monday last, Brown was employed washing bottles, and had heated water in large copper for that purpose. Just after two o clock, a named Harper, who was engaged in repairing the roof of a building, came and asked where the wet came in. Brown got on the top of the furnace to show him, and was in the act of pointing to the spot, when fell backwards, and was completely immersed the scalding water. Harper immediately endeavoured to assist him, but he got out himself, and exclaimed “It is a bad job." Every attention was paid to him, and all that human aid could do was done to relieve his sufferings. He remained perfectly sensible, and conversed with his friends to within few minutes of his death, which took place at a quarter past three o'clock on Tuesday morning, having survived the accident thirteen hours. He bore an excellent character from his employers, was 23 years age, and has left a young wife with a posthumous offspring. A coroner's inquest was held, on Thursday, before T. Hughes, Esq., when the above facts were related, and a verdict of accidental death returned.—Hereford Times.'[2]