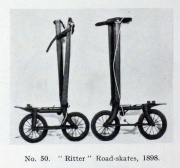 Made by the Road Skate Co, 77 Oxford Street, London.

No. 50. Pair of 'Ritter' road skates. Though strictly speaking, not qualifying for inclusion in a collection of cycles, these instruments of travel are very closely associated with cycling. The men who made them and the enthusiasts who used them were all cyclists, and, indeed, each skate is in reality a tiny bicycle.

These skates were invented by Mr. Ritter, a Swiss, who was foreman at the original Napier Works at Vine Street, Lambeth, London, where (later) the first Napier motor-cars were made. The Ritter skates were popular about 1898, and several well-known cyclists, notably Montague Napier, Walter Munn, and A. Hoffman, formed a club and skated on the road every week-end.

When last heard of (1929) Mr. Ritter was in business as an engineer in Paris under the name of Ritter and Smith, 35 Rue Batignolles. The skates weigh 81 lbs. the pair. They were presented to the Collection by C. G. Bowtle, the well-known racing cyclist. It will be noted that each skate is secured to the boot by clips on the principle of the 'Acme' ice skate: the wheels run on ball bearings, and a brake is applied to the rear wheel by pulling the cord which follows the wooden strut up to within a few inches of the skater's knee. [1]