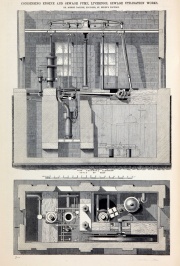 He served an apprenticeship to the firm of Hick and Rothwell, of Bolton-le-Moors, and applied himself so assiduously to obtain a thorough practical knowledge, that whilst still an apprentice, he was sent to assist in the erection of a large pumping engine and pumps in the shaft of the Haydock Colliery, looked upon at that time as a superior class of mining machinery, and which to the present day is doing good work.

In 1830 Mr. Daglish joined the firm of Lee, Watson and Co., iron founders, St. Helens, in which business his father had also an interest. The works then only covered about 5,000 square yards, but new fitting and turning shops, smithery, with pattern shop over it, were soon afterwards built.

In the year 1832 an engine and machinery were erected for working the inclined planes of the St. Helens and Runcorn Gap Railway.

About 1839 Mr. Daglish, in conjunction with Mr. John Smith, undertook to work the traffic of the then St. Helens and Runcorn Gap Railway, and continued to do so until 1848, having a separate establishment, called Sutton Sheds, St. Helens Junction, for keeping in repair the engines and rolling stock.

In 1845 Mr. Daglish erected his first cotton-Dill engines at Wigan.

About 1846 he was engaged in large contracts for bridges required on the Liverpool and Bury Line of the Lancashire and Yorkshire Railway, including two large lattice-bridges, for carrying the railway over the river and canal at Bolton.

In 1847 the Wavertree road-bridge, Edge Hill, Liverpool, was erected by the then firm of Robert Daglish, Junior, & Co. In 1849 the same firm built the Great Howard Street and Borough Gaol bridges of the Lancashire and Yorkshire Railway, Liverpool.

In 1850 Mr. Daglish, in partnership with the late Mr. McCormick, constructed the Preston Extension of the East Lancashire Railway, including a large bridge over the River Ribble.

From 1851 the foundry business was conducted by Mr. Daglish alone until 1869, when he took his nephew, George H. Daglish, M. Inst. C.E., into partnership, and which partnership was carried on until his death on the 6th of May 1883.

Mr. Daglish supplied many waterworks pumping-engines, amongst which are those for St. Helens, Newark, Southport, Wirral, near Birkenhead, Bristol, Hodbarrow Mines, Widnes, and Warrington.

In 1852 the coal - drops at Garston, near Liverpool, were erected.

In 1856 Mr. Daglish constructed the Barrack or Bloody Bridge over the Liffey at Dublin. [Note: This is now called the Rory O'More Bridge ]. In this year the St. Helens works had to be further extended, and from 1863 to 1882 the works were very much improved and enlarged, so that they now cover an area of about 22,400 square yards.

ROBERT DALGLEISH, who died on 6th May 1883, at Palace Green, Kensington, was the third son of Robert Dalgleish, of Wigan (who was also a member of the Iron and Steel Institute up to his death in 1865), and was born at Wigan in 1809.

He was apprenticed and served his time with Messrs. Hick & Rothwell, of Bolton-le-Moors, and in 1830 he joined Mr. Lee Watson in carrying on a foundry and engineering works under the firm of Lee Watson & Co. at St. Helens, in Lancashire. Mr. Lee Watson shortly afterwards retired, and Mr. Dalgleish carried on the business alone for many years as Robert Dalgleish, jun., & Co.

Mr. Dalgleish's principal work was in winding and pumping engines, several of the leading collieries in South Lancashire having had their engines from his establishment. He supplied the pumping engines for many waterworks—among others, for St. Helens, Newark, Southport., Wirral, Bristol, Widnes, and Warrington. Another large branch of his business was that of providing machinery and plant for the glass and chemical trades.

He had been a member of the Institute since 1872.