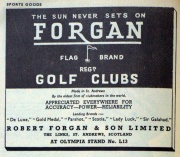 Forgan of Saint Andrews, is the oldest golf club factory in the world, dating back to the earliest years of what would later become the Royal and Ancient golf club, the sport's traditional custodians.

In 1819, its forerunner, the Society of St Andrews Golfers, appointed Allan Robertson as a ball-maker and Hugh Philip, a local carpenter, as its club-maker. Using thorn, apple and pear woods for heads and ash for the shafts, Philp mastered his craft, revolutionising play with shapes that, literally, broke the mould.

1856 Robert Forgan bought his uncle, Hugh Philp's, (1782-1856) club making business after his death. Forgan was the first to use hickory in the production of golf clubs. Demand was so high that Forgan took on Jamie Anderson as his apprentice. Anderson, an avid golfer, went on to win the Open three times.. The tradition of Forgan’s continued to flourish amid healthy competition from nearby rivals Tom Morris, David Anderson and Sons, Patrick of Leven, and the ambitious A. G. Spalding of London, which set up a branch in Fife to house their newest venture.

Forgan imported hickory, which was dried under cover by the side of the 17th fairway at St Andrews. In each of the Black Sheds there were rectangular stacks of square-cut shafts, each containing as many as 8,000 rods apiece. After a full 12 months’ seasoning they were deemed ready to be rounded off by hand and offered for sale.

1864 Forgan had a visit from the Prince of Wales. By then, the premises had relocated from Philp’s original workshop to an old fisherman’s house which was to become the centre of the company for decades. Saws and lathes had been introduced into the production process, enabling mass manufacturing. His Royal Highness was so taken with the unique set of clubs presented to him in 1864 that by 1902, the insignia of golf club makers to His Majesty King Edward was proudly displayed over Forgan’s door.

1906 The business was then passed into the hands of his two sons, Lawrence and Robert, who inherited the company during an era of change. Clubs with names like Driving Putter and the grandly-titled Baffing Spoon were obsolete, replaced instead on the fairways with clubs like Iron Niblick and Brassy, with strong shafts and rounder heads which more closely resemble today’s metal missile-launchers.

Forgan’s was a thriving business, but elsewhere in the region the economic situation was far worse. The fall in herring stocks hit many hard, and those displaced from the fishing industry needed to find new work. Some became the first caddies and professionals, missionaries dispatched to convert the golfing agnostics. Forgan’s hired agents to take orders from any country where golf was played. Closer to home, the family remained engaged in local affairs, making large donations to St Andrews Martyr’s Church, where a beautiful lancet known as Forgan’s Window is still preserved.

WWII. Despite seemingly robust health, the Second World War sounded the death knell for Robert Forgan and Sons’, as they could not cope with the international market, particularly when American clubs flooded the market. Distracted by attempts to reproduce its once-unique gems en masse, the stricken company was eventually taken by over the American-owned Spalding. Under their auspices production resumed briefly in 1945.

1963 In March, the workforce was paid off and the machinery sold on, as Spalding concentrated its club-making in Belfast.

The disused factory was eventually turned into the original St Andrew’s Woollen Mill where visitors could enjoy tweed, free coffee and shortbread.

1988 In May, the building was bought by the Royal and Ancient Golf Club. It has since been extensively refurbished to create offices. The exterior facade, listed under a preservation order, has been retained, and inside there are still remnants of its former pomp.

On Market Street, a golden sign on the pavement marking the entrance to Forgan’s old factory has faded away but there are plans to create a replica as a tribute to the company’s contribution to the great game of golf.

2008 The brand has been re-ignited with the launch of an online custom fitting system, the first of its kind from an established golf club manufacturer.