1941. Exhibit at the Chatham Dockyard. 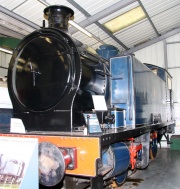 1937 September. The company was formed when Robert Stephenson and Co in Darlington took over the locomotive building department of R. and W. Hawthorn, Leslie and Co in Newcastle.

1938 The goodwill of the Kitson and Co and Manning, Wardle and Co companies was bought. At this time Robert Stephensons had built 4,155 engines and Hawthorns a further 2,783. Locomotive numbering began at 6,939 as the sum of all the locomotives built by Robert Stephenson and Co and R. and W. Hawthorn, Leslie and Co was 6,938.

WWII The plant was fully occupied building 0-4-0 and 0-6-0 saddle tanks for industrial use.

The bulk of the output was for export or industrial use, but British Railways ordered thirty five Class L1 2-6-4T for the Eastern region and eighty 0-6-0 pannier tanks for the Western Region.

1958 The last steam locomotives to be built were a conventional 0-6-0T and a six-coupled fireless locomotive in 1959.

1961 Locomotive builders and engineers and boiler makers. Believed to be the oldest established locomotive works in the world and came into existence with George Stephenson's famous locomotive "The Rocket". 1,000 employees. [1]

1961 Locomotive building at the Newcastle upon Tyne works ended.

1962 New wholly-owned subsidiary formed: English Electric Traction to bring all its railway-related activities under one management. These included The Vulcan Foundry, Robert Stephenson and Hawthorns and W. G. Bagnall[2].

1964 Locomotive building at the Darlington works ended. Around 1,000 locomotives were built by the company since its formation in 1937.

N.M. wrote in July 2010: R.S & Hawthorn works were on the east side of the East Coast Main Line, just south of Thompson Street in the north part of Darlington. To reach the offices and works of Stivvies, one had to turn off Thompson St and drive down a tree lined roadway called, would you believe "Wylam Avenue" so it would appear that the works were there before or were built at the same time as the approach road. There was also, on the little estate of houses, Locomotive St, Furness St, Ajax St and Hercules St. Hercules being the name of a locomotive built in 1838 for the Berlin and Potsdam railway; Ajax the name of another locomotive and Furness with connections to The Furness line in Cumberland.

The offices were Red brick and faced North towards Thompson St across their playing fields. I remember watching my father play cricket in the evenings after work, for the works department team. He would take me in on a Saturday morning and show me the newly finished and painted engines when they were due to go out.

The Darlington Works of R.S.&.H were not known as North Road works. These were LNER works. The R.S.& H works were known as Thompson Street works.