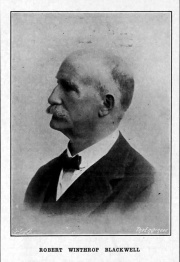 Robert Winthrop Blackwell (1858-1918) of Robert W. Blackwell and Co and chairman of Johnson and Phillips

1891 Became a foreign member of the Institute of Electrical Engineers

ROBERT WINTHORP BLACKWELL died, after a very short illness, on the 28th March, 1918.

By his death the electrical profession loses one of the few remaining and best-known pioneers of electric traction, and one whose name has been intimately connected with the most important branch of this profession both in this country and in the United States for the last 35 years.

Born in New York in 1858 he was educated at Princeton at the John C. Green School of Science connected with that University, receiving the degrees of B.A. in 1879 and M.A. in 1882. After leaving college he passed through the Law School of Columbia College in the City of New York, receiving the degree of LL.B. in 1881 and being admitted to practice at the New York Bar in the same year.

Shortly after passing the Bar he entered the office of the Gramme Electrical Company, whose shareholders were the Brush, Edison, Fuller, Jablochkoff, Thomson-Houston, United States and Weston Electric Light Companies, it being the first attempt to consolidate electric light and power interests into one control.

In 1883 he became the Secretary of an electric traction syndicate, which in 1884 became the Bentley Knight Electric Railway Company. This Company can claim to have been the first to run an electric car in a city street by means of continuous conductors from a central power station.

From 1884 to 1890 he was successively the Secretary, Treasurer, Managing Director and Chairman of this Company.

In 1883 to 1886 the work of this Company was carried out at the Brush electrical works at Cleveland, and at the Rhode Island locomotive works of Providence, Rhode Island.

In 1888 to 1889 he established works in the City of New York for the Bentley Knight Company in which were manufactured electric dynamos, motors, trucks, etc., the first 60 machines used by the West End Street Railway of Boston being of this make.

Early in 1890 he sold out all his electrical interests to the Thomson-Houston Electric Company and came to Europe for a holiday ; but after spending a year in travelling about he settled down to business. Mr. Blackwell, as a contemporary of Sprague, Vanderpool, and Edison, was intimately associated with the great pioneer work carried out in the United States between 1883 and 1889. Speaking at the sixth annual meeting, in Philadelphia, of the Street Railway Association on the 19th October, 1887, Mr. Blackwell said: "We entered the electric city tramway field long in advance of all others, and we believe that electric street railways for city service can be used effectively only where the power to drive the car is transmitted to it from a generating station." How true this prevision was has been amply demonstrated, although at the time many thought the future lay with the storage battery.

In 1890 he became associated with Messrs. Greenwood and Batley of Leeds, in conjunction with whom he opened an office in London for the purpose of introducing electric traction on the tramway systems of. the United Kingdom. Speaking about the United States before the Institution in 1892, Mr. Blackwell said: "The public has thoroughly supported those tramways which have introduced electricity, and has rewarded their enterprise by greatly increased patronage. That electric traction will receive the same acceptance here that it has already gained across the water I do not doubt." Time more than justified Mr. Blackwell's anticipations, although several years of arduous pioneering work were necessary to overcome the opposition of inertia and vested interests before electric traction was definitely established in this country.

In 1894 Mr. Blackwell founded the firm of Robert W. Blackwell & Company. He exhibited in 1897 at the Brussels Exhibition, and was a member of the International Jury. It is interesting to note that although American born and a very prominent member of the American Society in London, all Mr. Blackwell's associates and staff were British, and the prescience shown by him in selecting men, and the kindly assistance and advice and loyal support he always gave his staff, have resulted in the launching of a great many engineers into the prominent positions they now hold in many parts of the world. His motto always was: "You cannot afford to do bad work; the best only is good enough."

He was a member of the Royal Automobile, Ranelagh, and City Liberal clubs, and always retained his membership of the Manhattan, Lawyers, and University clubs of New York. He was a prominent mason, was past master of the Lodge of the Nine Muses and the founder of the American Columbia Lodge, and was awarded London rank for his masonic services. His memory will be kept green in the hearts of all those who had the privilege of his friendship, and nothing is more characteristic of him than the opinion expressed by one of his oldest friends, "Blackwell was as straight as a die."