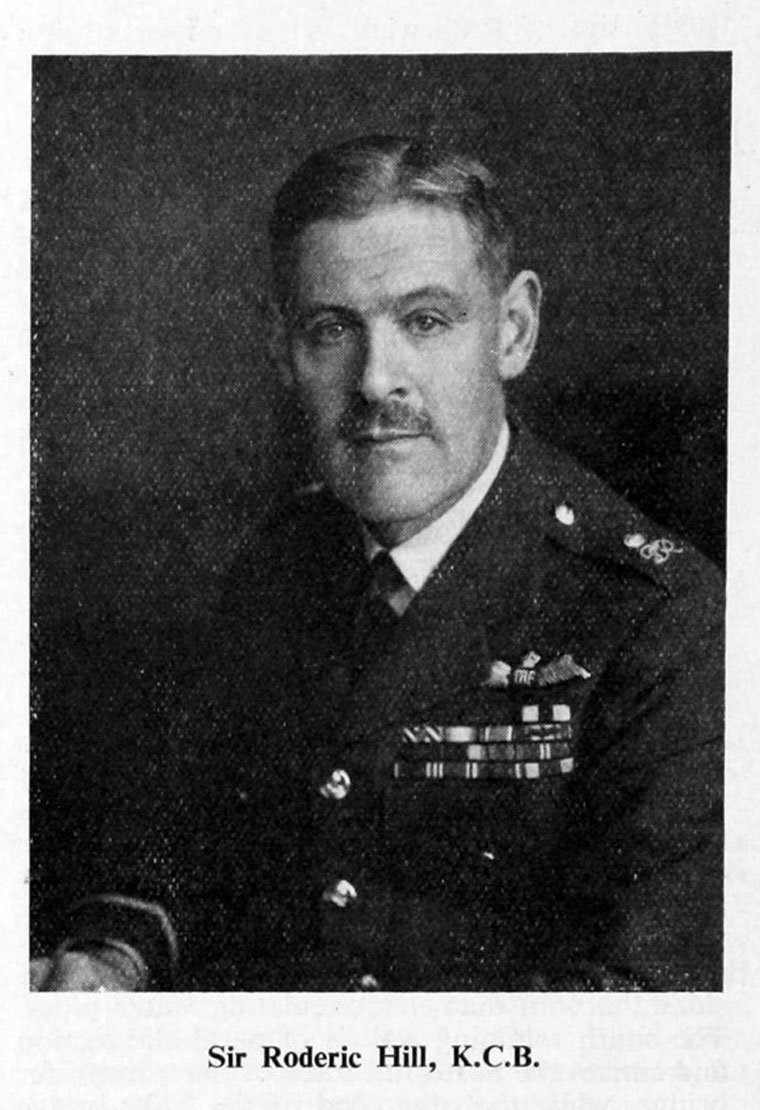 1912 With his older brother, Geoffrey, produced an aircraft model for the Children's Exhibition at Olympia, followed by further models and eventually a full-sized glider.

WE record with regret the death of Air Chief Marshal Sir Roderic Hill, K.C.B., F.R.Ae.S., which occurred suddenly, in London, on October 6th.

Sir Roderic, who was sixty, had spent a distinguished career in the scientific branches of the Royal Air Force, and, since his retirement from that service in 1948, had been Rector of the Imperial College of Science and Technology.

Roderic Maxwell Hill, who was the son of Professor M. J. M. Hill, of London University, was educated at Bradfield College and at University College, London, of which he was subsequently elected a Fellow.

In the early part of the first world war he served in the 1-2th Northumberland Fusiliers, transferring to the Royal Flying Corps in 1916. After a year's service in France with No. 60 Squadron, Sir Roderic was appointed to take charge of the experimental flying department at the Royal Aircraft Establishment Farnborough. He remained there for six years his work being recognised by the award of the A.F.C. and Bar. Sir Roderic initiated a number of experiments concerned with the radio control of aircraft, and with the investigation of wing flutter. He received the R. M. Groves Memorial Prize in 1921.

Sir Roderic left Farnborough in 1923 and in the following year graduated at the Royal Air Force staff college at Andover. Thereafter he served for a time with the technical staff at the Middle East headquarters, returning to this country in 1927 to become an instructor at the R.A.F. staff college.

In 1932, Sir Roderic was appointed deputy director of repairs at the Air Ministry, and in 1936 again went overseas for two years as Air Officer Commanding in Palestine and Transjordan.

In 1938 he returned to the Air Ministry as director of technical development. During the second world war, Sir Roderic held several important appointments. He was director-general of research and development in the Ministry of Aircraft Production during the critical period of the Battle of Britain, and then went to Washington with the British Air Commission as controller of technical services. Sir Roderic next became Commandant of the R.A.F. staff college, and in the summer of 1944, when the flying bomb attacks on this country had to be countered , he was appointed commander-in-chief of Fighter Command.

At the end of 1946, Sir Roderic was placed in charge of a new department of the Air Ministry which became responsible for all branches of the technical work of the Royal Air Force. At the same time he was promoted to the rank of Air Chief Marshal.

From 1946 until his retirement in 1948, Sir Roderic was Principal Air Aide-de-Camp to H.M. King George VI. He was created C.B. in 1941 and promoted to the honour of K.C.B. in 1944. In addition to his services as Rector of the Imperial College during the last six years, Sir Roderic was last year elected Vice-Chancellor of the University of London. On account of failing health, however, he felt compelled to relinquish that office a few months ago.