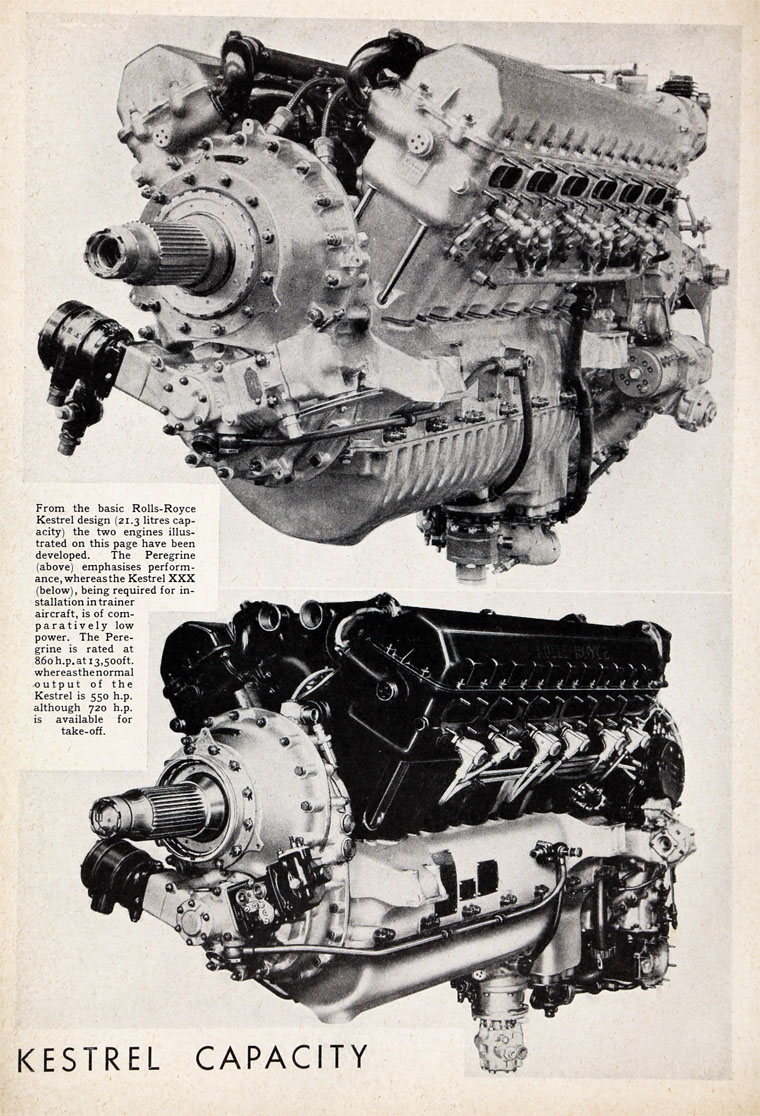 The Kestrel was a 700 hp V-12 aircraft engine from Rolls-Royce, their first cast-block engine and the pattern for most of their future piston-engine designs.

The Kestrel came about as a result of the excellent Curtiss D-12, one of the first truly successful cast-block engines. Earlier designs had used individually machined steel cylinders that were screwed onto a crankcase, whereas the cast-block design used a single block of aluminium that was machined to form cylinders. The result was both simpler to build as well as lighter and much stronger, requiring only an investment in new machining equipment.

The D-12 was one of the most powerful engines of its era, and continued to swap records with other high-power engines of its era. No British company could offer anything like it, and when Fairey selected it for their Fairey Felix design the Air Ministry had enough and ordered Napier and Son and Rolls-Royce to start work on cast-block engines of their own.

Arthur Rowledge, one of Napier's chief engineers and the designer of the famous Napier Lion, left for Rolls-Royce. Applying every known advance since the D-12 was introduced, Rowledge designed the new engine to use supercharging at all altitudes, allowing it to outperform naturally aspirated engines by as much as they were willing to increase the boost pressure.

One key advance in the Kestrel was the use of a pressurised cooling system. Water boils at 100°C at standard atmospheric pressure, but the boiling temperature decreases with altitude. Since the amount of heat carried out of the engine is a function of coolant temperature and volume, if the coolant has to be kept below boiling an increasing amount of fluid has to be used, along with an increasingly large radiator to cool it. The solution was to pressurize the entire cooling system, thereby not only preventing the drop in cooling performance with altitude, but in fact increasing the boiling point even on the ground. The Kestrel was built to maintain enough pressure to keep the boiling point at about 150 °C.

The engine was first produced in 1927 at 450 hp, which soon improved in the IB model to 525 hp (390 kW). This model saw widespread use in the famed Hawker Hart family that dominated British air power during the early 1930s. Line improvements increased power dramatically; the V model provided 695 hp at 3,000 rpm with no basic change to the design, while the XVI used in the Miles Master delivered 745 hp. Messerschmitt also tested its first Messerschmitt Bf 109 prototypes with Kestrel engines in 1935.