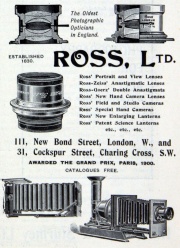 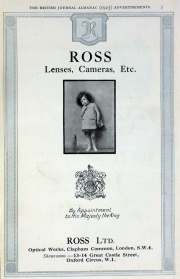 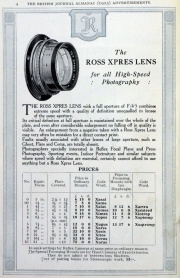 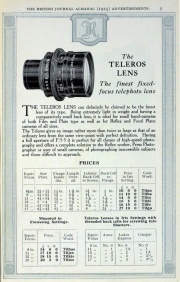 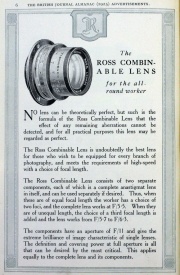 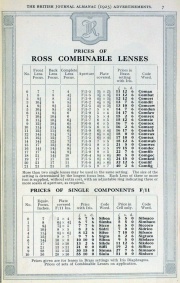 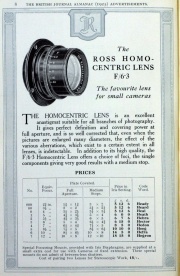 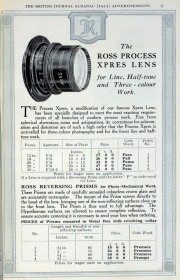 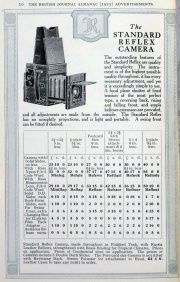 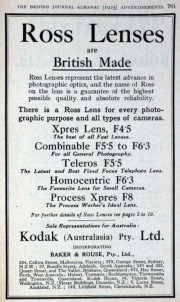 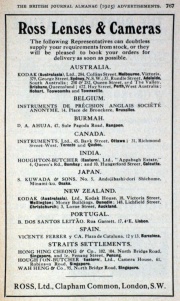 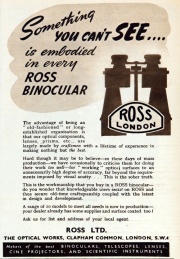 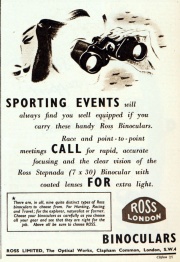 c1840 Ross started making lenses for cameras. The lenses were engraved A. Ross, London. Ross had an early association with Carl Zeiss in Jena; Zeiss licensed some Ross patent designs particularly for EWA lenses and in turn Ross had a licence for the British Empire to make some Carl Zeiss lens types.

Zeiss built a factory in London, mainly to produce binoculars; some camera lenses also were produced.

1858 After the death of Andrew Ross the firm was run by his 'son T. R. Ross', and the lenses were engraved Ross, London. John Henry Dallmeyer, who had married Ross's second daughter, Hannah, inherited one third of his employer's large fortune and the telescope manufacturing portion of the business.

1859 The firm moved to Brook Street with a sales department in New Bond Street.

1885 Gold medal for invention in respect of progress and excellence of work in the manufacture of lenses, since the early days of photography, also microscopic and other optical apparatus.

1921 Charles Parsons acquired a controlling interest in Ross Ltd, of Clapham, where he improved the methods of glass-grinding.

1948 Ross Ltd and Barnet Ensign Ltd were merged to form Barnet Ensign Ross Ltd. Clearly it was hoped that with the addition of Ross's quality lenses to their existing range of cameras, B.E.R. would become a force to be reckoned with.

1954 Renamed Ross-Ensign Ltd; it produced classic 50s roll film cameras, like the Selfix and Autorange, which are still popular today with many collectors.

By 1955 Ross Ensign had moved production from Walthamstow to Ross's Clapham Common factory, where they continued to produce cameras along with lenses and binoculars.

1961 the production of cameras ended but the company continued for some time to sell Ross optical devices such as binoculars or enlarging lenses.