Grace's Guide is the leading source of historical information on industry and manufacturing in Britain. This web publication contains 148,463 pages of information and 233,887 images on early companies, their products and the people who designed and built them. 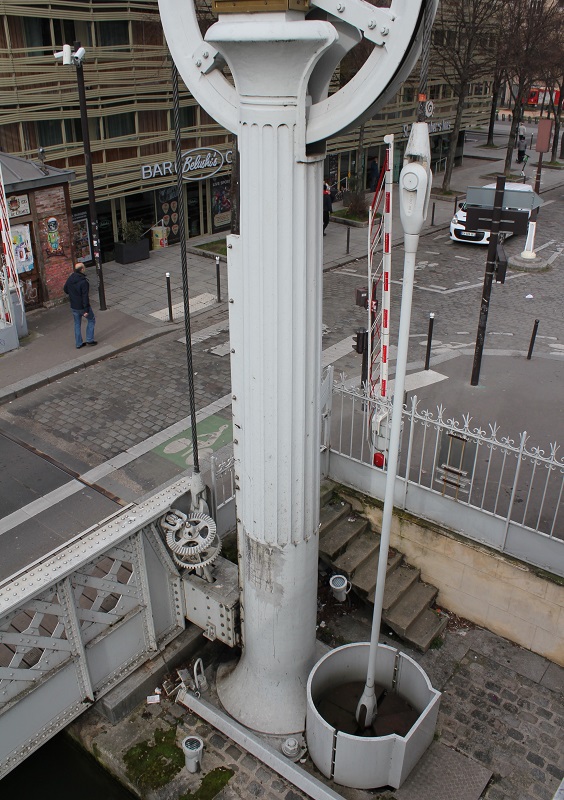 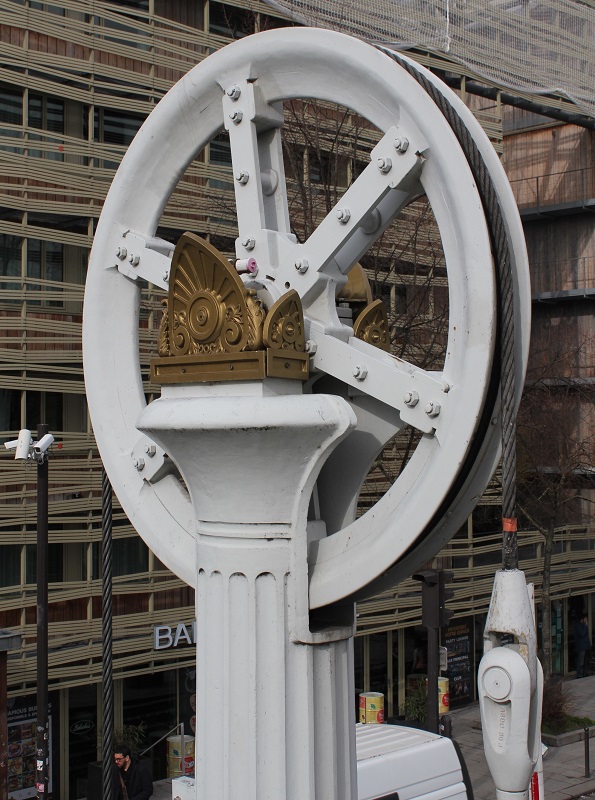 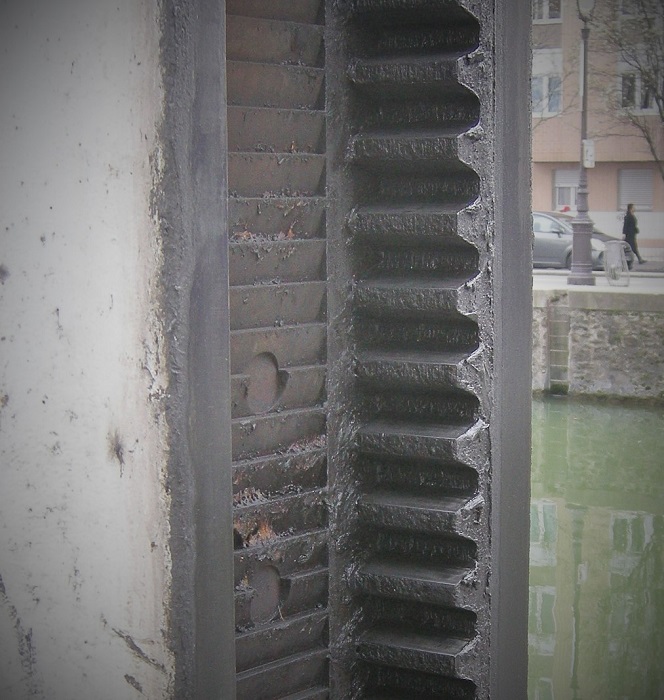 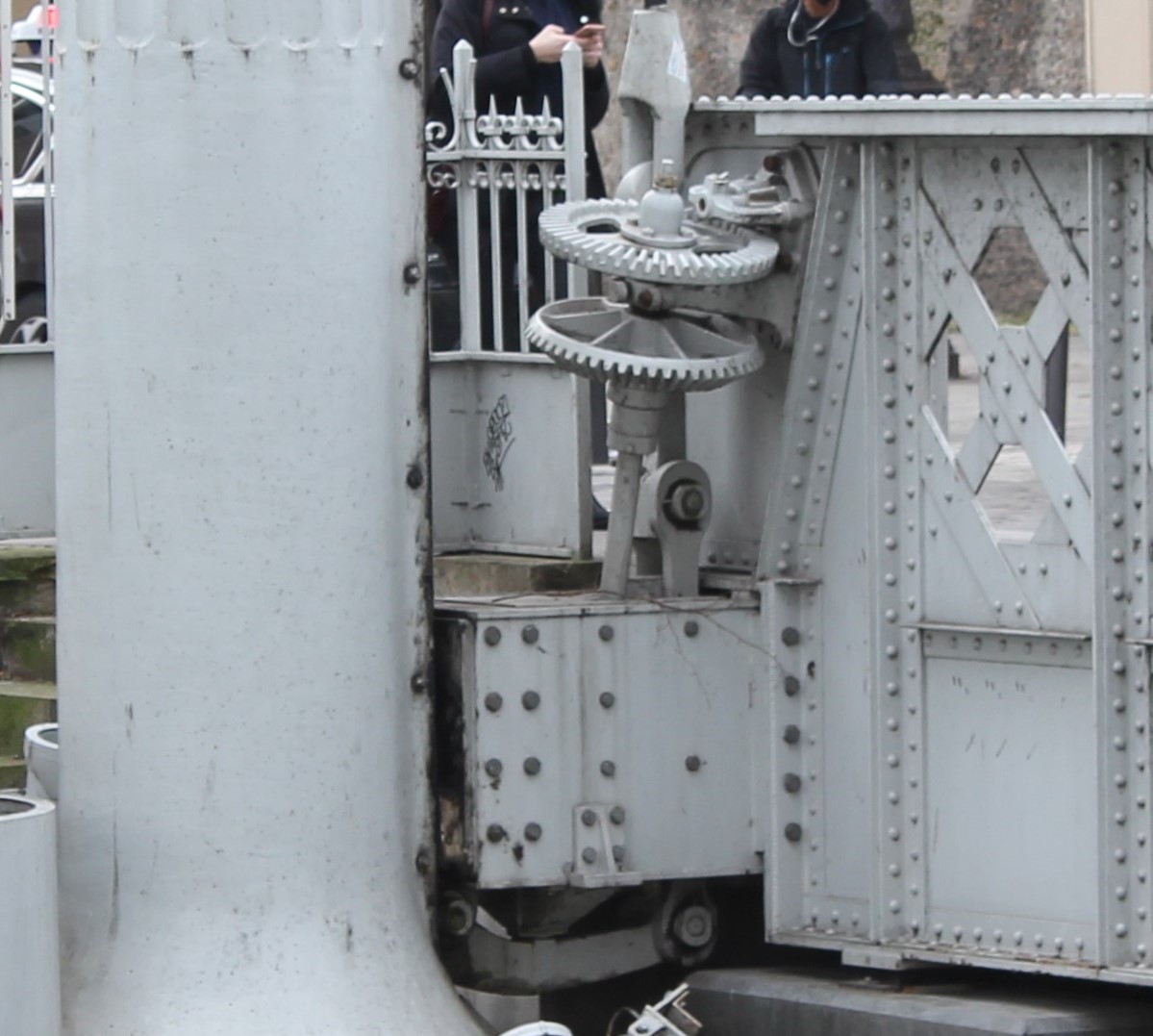 The adoption of a vertical lifting bridge, and the details of its arrangement, were dictated and constrained by the site constraints and also by the presence of existing sewers which followed the line of the road and passed under the canal.

The lifting bridge is flanked by a footbridge (passerelle) which allows pedestrians to cross the canal when the bridge is raised.

The project was managed by Louis Le Chatelier (1853-1928), Engineer of the Ponts et Chausées, under the direction of M. Humblot and with the assitance of M. Briotet. The structure and equipment were produced by the Cie. de Fives-Lille in 1885.[1].

The bridge remains in regular use. Renovation was carried out in 2010-2011, including replacement of the hydraulic system with modern equipment.

The bridge is raised by hydraulic rams (one at each end). Four cast iron columns guide the corners of the deck.

The most distinctive features of the bridge are the four fluted cast iron columns. These support pulleys which guide cables (originally chains), one end of which is connected to a corner of the lifting bridge deck, while the other end supports a stack of counterweights (mostly out of sight in photo 2).

Casual study of the bridge does little to reveal the mysteries of its workings, especially when it is in its lowered position and its hydraulic rams are out of sight. Fortunately a contemporary description and drawings are available online [2] [3]. These show details of the mechanism and also the arrangement of tunnels, sewers, pipes and cables under the canal.

The rams were actuated by towns' mains water, whose pressure varied between 20 and 45 metres head of water (28.5 - 64 psi) during the day. Raising and lowering was accomplished simply by turning the handwheel of a valve. A screwed spindle passed through the handwheel, and turning the wheel to raise the bridge initially closed the port which was normally open to drain. Once the drain valve's plug was on its seat, continued movement of the screwed spindle then had the effect of lifting the water supply valve off its seat, admitting water to the two hydraulic rams. The valve is shown in Figs 3 & 4 of Plate II in the 1886 drawings.

The internal arrangement of the rams was by no means straightforward. The moving pistons were stepped, the diameter being larger at the bottom than over most of the length. They are cast with a division plate across the diameter (see Figs 1 & 2, Plate II in the 1886 drawing). Pipes connected the ram to the control valve and interconnected the two rams to ensure that they worked in unison. The interconnecting pipes passed under the pavements on each side of the deck. The rams were pivoted near the top of the casing to accommodate a limited amount of misalignment. The water pipes were sufficiently long and adequately curved to provide the small amount of flexibility needed.

The deck could also be raised manually in the event of failure of the hydraulic system. A removable crank handle was applied to turn the upper bevel gear seen in photo 4. Also note the squared end on the large bevel gear's shaft. The 1886 drawing shows a handwheel fitted here. The function of the second bevel gear on this shaft is not apparent, and it does not appear on the 1886 drawing. At the bottom of this shaft is another bevel gear, engaging with a gear on a horizontal shaft running across the width of the deck. At each end of this horizontal shaft is a small pinion which engages with the vertical rack seen in the photos. Other bevel gears and shafts interconnect all four lifting pinions.

Also note the 'saw-tooth' rack in photo 5. The cable (originally a chain) is not fixed directly to the deck, but is attached to one end of a lever (visible at the bottom of photo 6). Machined on the other end of the lever are three teeth. The lever was pivoted close to the toothed end (see photo). In the event of the chain breaking, that end of the lever would drop, bringing the teeth up against the safety rack, ready to engage if the deck dropped. Another feature was the provision of a leaf spring above the mid point of the lever, to serve as a shock absorber. Just visible in photo 6. Also see Plate II Fig 6 of the 1886 drawing.

The pulleys were designed to support 40 tons and are of unusual construction, being assembled from numerous machined parts and bolted together, probably reflecting their large size (1.96m/6.4 ft diameter). The 1885 account noted that the construction showed the minute precautions taken in the design of the bridge.