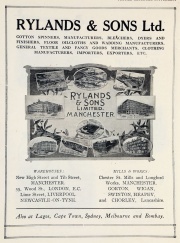 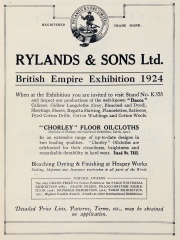 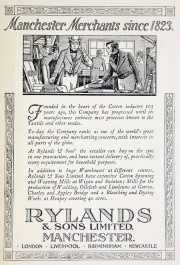 1873 The company was registered on 25 October, to take over the business of the firm of the name as manufacturers and general warehousemen. [1]

1880s Reported to have built a few steam locomotives.[2]

1884 Installed a horizontal cross-compound engine by W. Sharples and Co at their Dacca Twist Mill, Water Street, Manchester. Cylinders 22" and 38" diameter, 5 ft stroke. Gear drive, the spur flywheel being 12 ft 8" diameter and 16" wide, the pinion 5 ft 7" diameter. The teeth were cast, not machined, but were said to run 'almost noiselessly'.[3]

1888 An obituary of John Rylands noted that he 'occupied pretty nearly the whole of New High- street and Bread street, to say nothing of his large warehouse in Wood-street, Cheapside, London, and the great manufacturing works at Gorton, and at Ainsworth, near Bolton. To these were after- wards added the Longford Mills, Oxford-street, Chorlton-on-Medlock; the Dacca Mills in Water- street; the Medlock Mills in South Junction-street; the Gidlow Works at Wigan; the Mather-street Mills in Bolton; the mills at Swinton and Walkden Moor; the Cluster-street Mills and Longford Works at Crewe; the Heapey Bleach and Dye Works, near Chorley; and extensive branches in London and Liverpool. His Manchester warehouses now occupy most parts of New High-street and Bread-street, and considerable sites in Tib-street, Bridgewater-place; Joiner-street, and Market-street.'[4]

Note: Manchester's impressive John Rylands Library, which opened to the public in 1900, was founded by Enriqueta Augustina Rylands in memory of her husband, John Rylands [6]