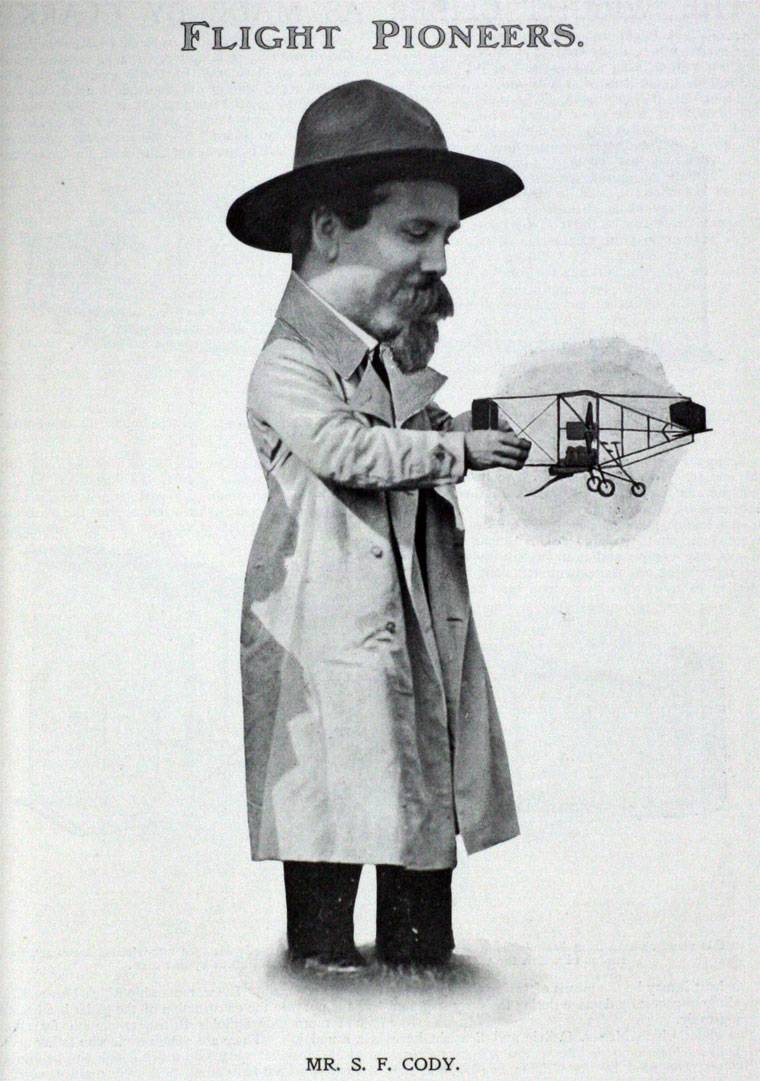 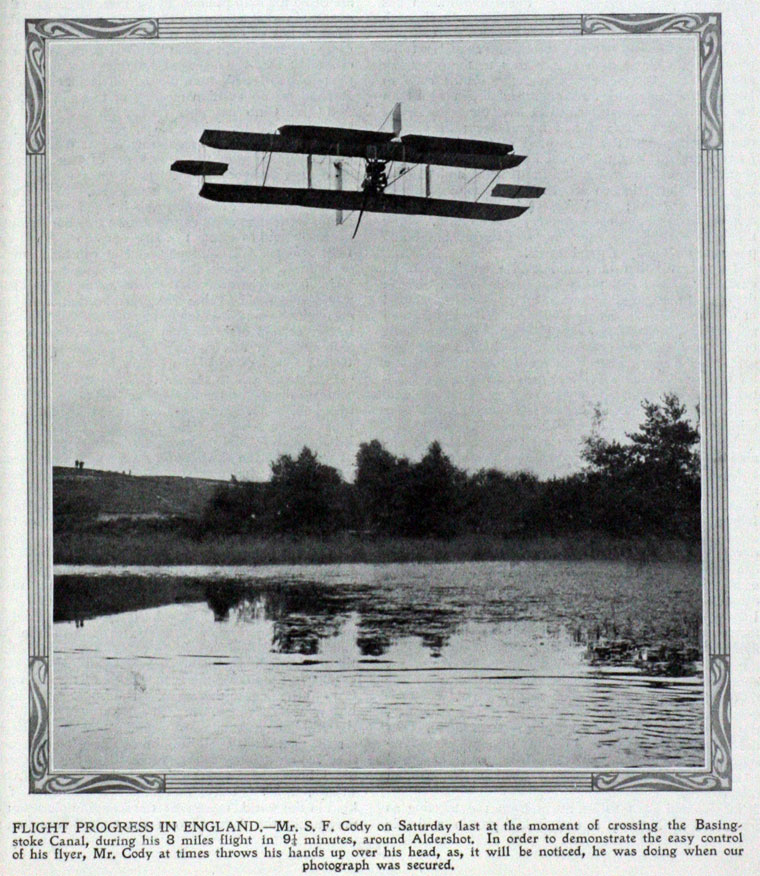 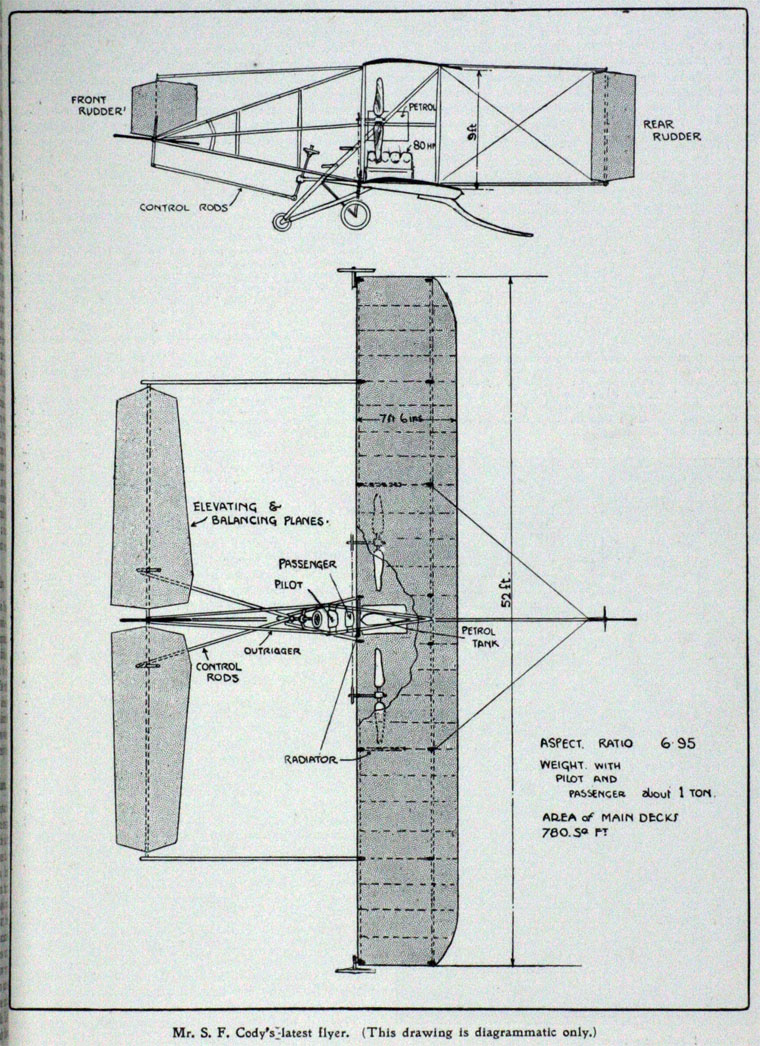 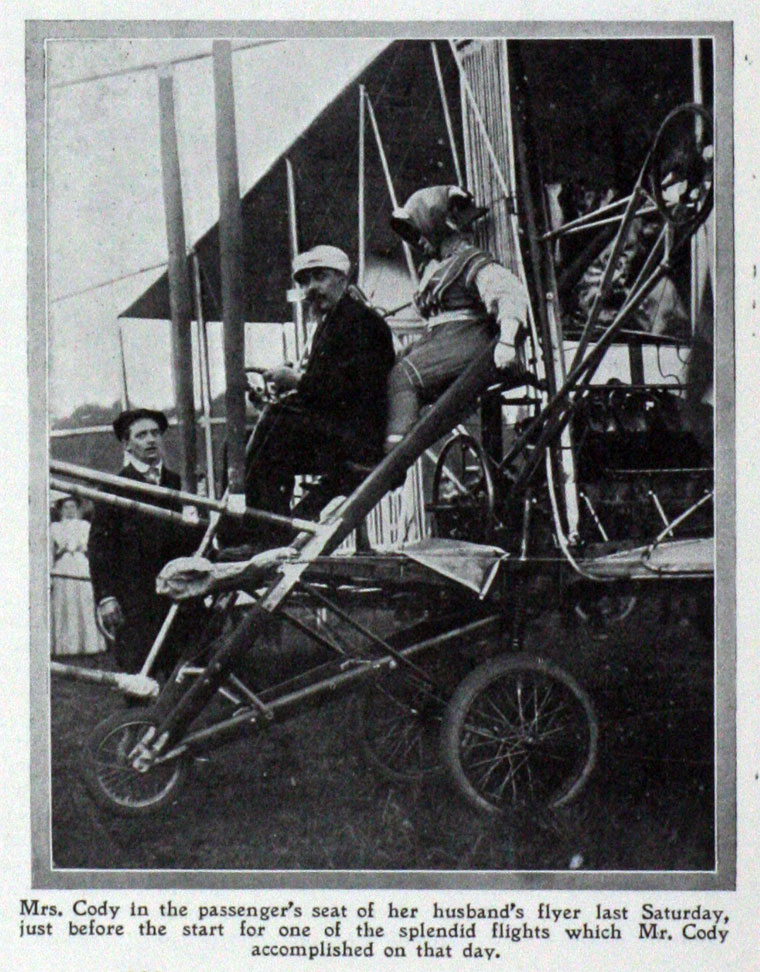 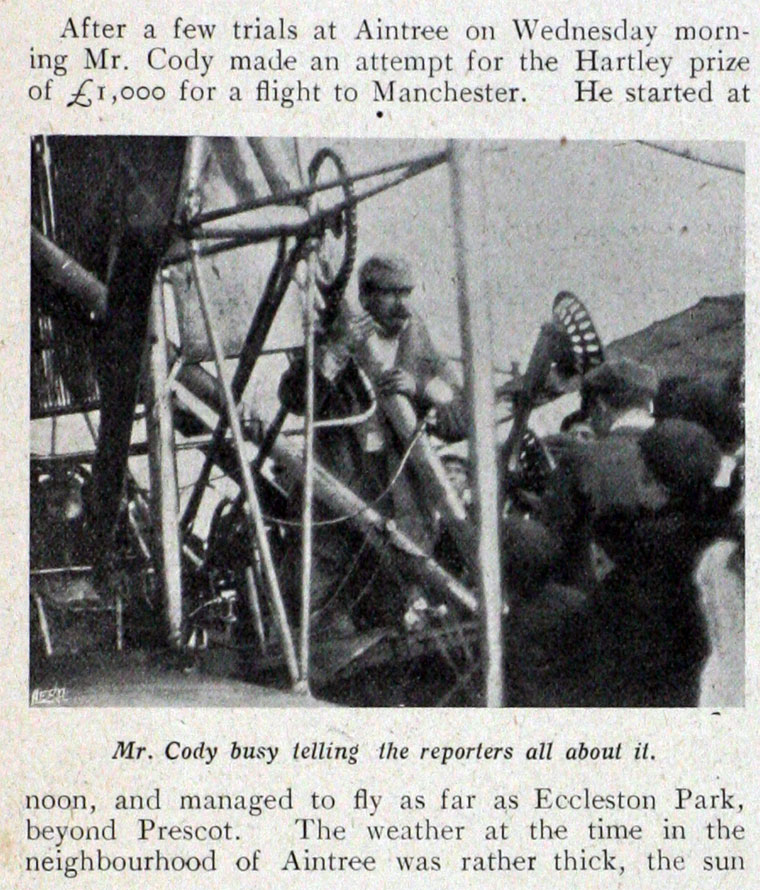 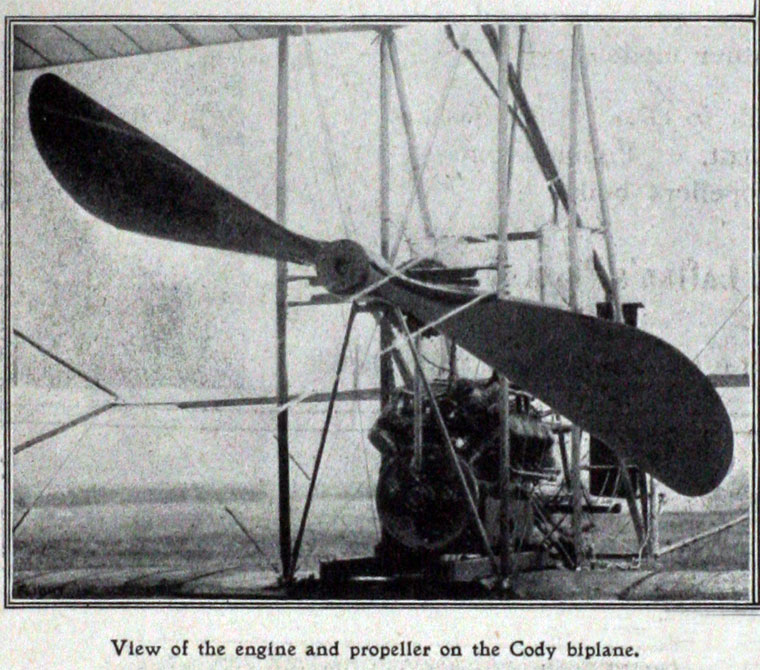 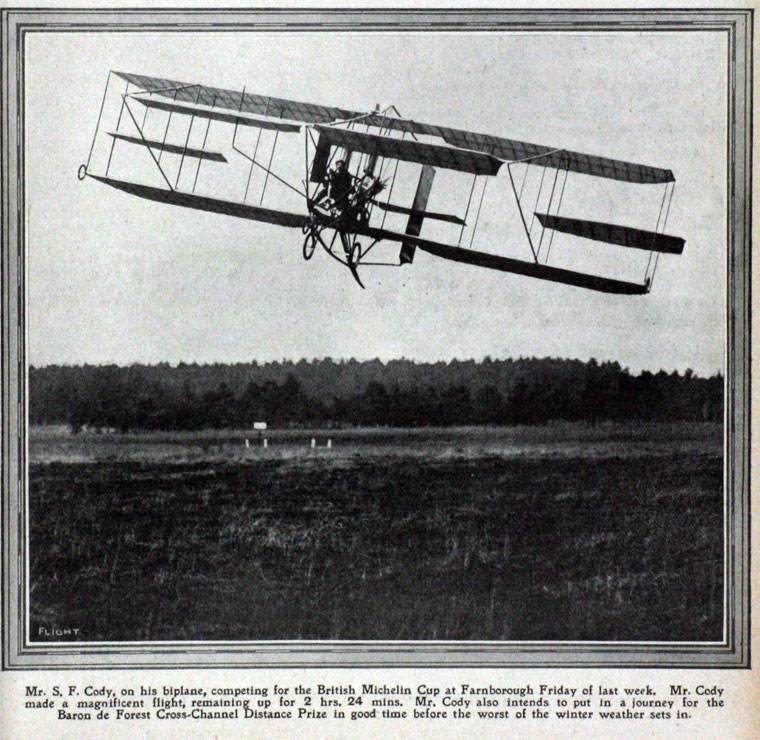 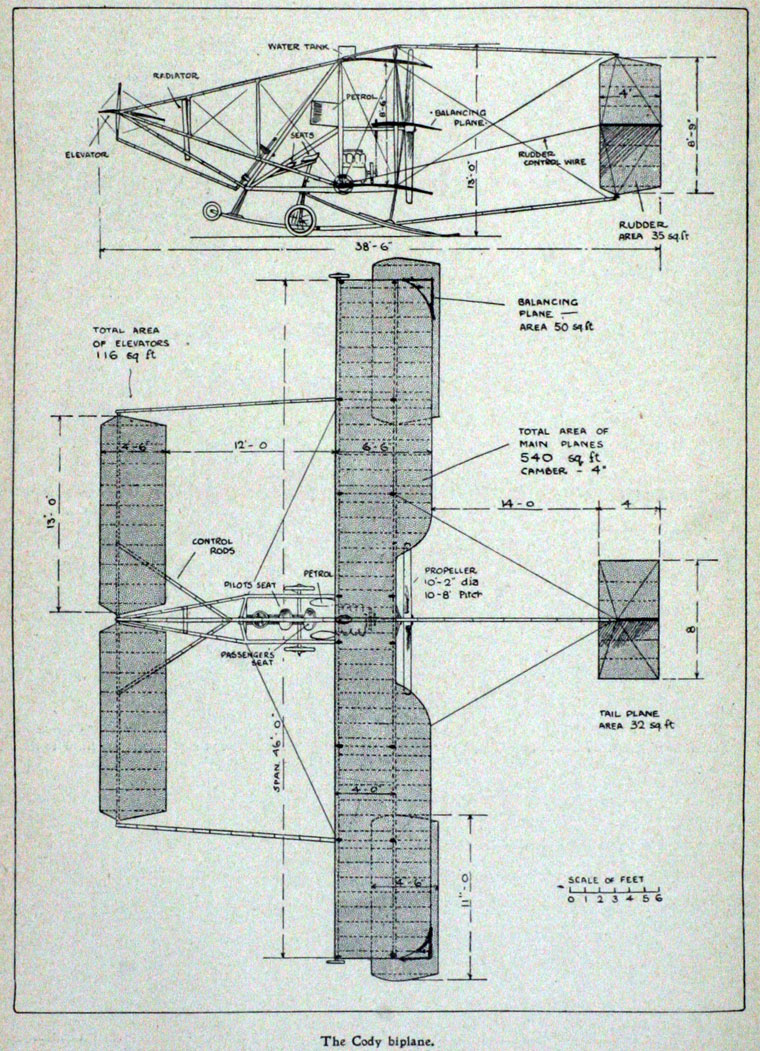 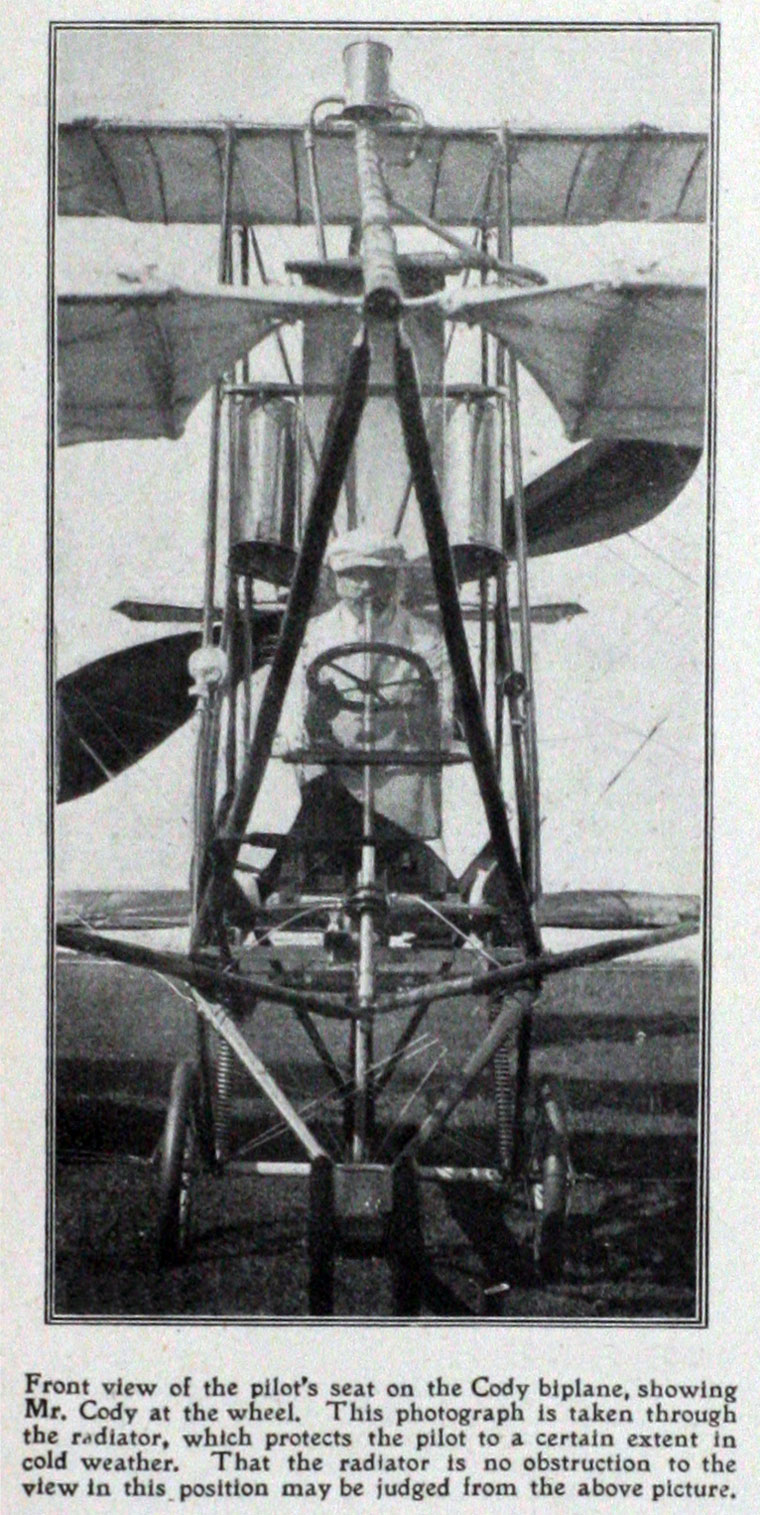 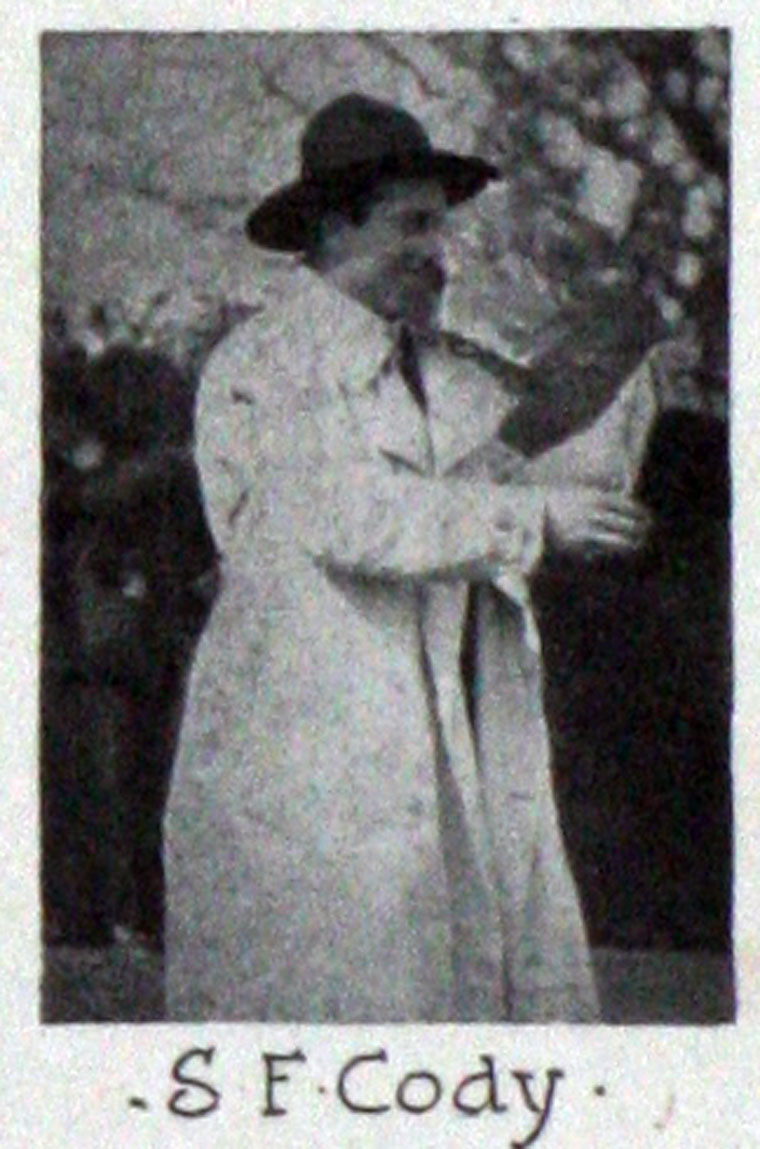 Samuel Franklin Cody (1867-1913) was an early pioneer of manned flight, most famous for his work on the large kites known as Cody War-Kites that were used in World War I as a smaller alternative to balloons for artillery spotting.

1867 Cody's early life is difficult to separate from his own stories told later in life, but it appears he was born Franklin Cowdery in Davenport, Iowa in 1867. Throughout his youth he lived the typical life of a cowboy. He learnt how to ride and train horses, hunt buffalo, shoot and use a lasso. He later prospected for gold in an area which later became Dawson City, centre of the famous Alaskan Gold Rush.

Cowdery then started touring the US with a Wild West show, starring as 'Captain Cody, King of the Cowboys'. Cowdery married Maud Lee in Norristown, Pennsylvania, and the name Samuel Franklin Cody appears on the 1889 marriage certificate. Cody/Cowdery performed cowboy acts with his wife, demonstrations of rifle and pistol sharpshooting and horsemanship. In 1890 he took the show to Europe, and was later joined by his wife Maud Maria.

S. F. Cody together with his wife Maud Maria toured Europe giving rifle and horse riding displays and it was whilst touring that he and his wife met with Mrs Elizabeth Mary King (nee Elizabeth Mary Davis) who was also touring with two of her younger sons Leon and Vivian King (later known as Cody).[Even today Vivian's offspring's refer to S. F. Cody as their Grand or Great-grandfather which of course he is not.] Maud Maria (Cody's real wife) taught the two young boys to ride and shoot on horseback) Maud Maria was later to return to the USA alone, whilst her husband took up with Mrs Elizabeth Mary King (later to be known as Lela Marie Cody) although they never married.

Whilst in England, his company, including several members of the 'King' family, (to save embarrassment Leon and Vivian King took the name of Cody as neither Mrs King or Cody ever divorced) toured the music halls, which were very popular at the time, giving demonstrations of his horse riding, shooting and lassoing skills. In 1898 Cody's latest show, The Klondyke Nugget, became very successful, this also included Edward Le Roy,(Edward King, Lela's eldest son from her marriage to Edward John King, licensed victualler) Whilst in England, Cody lived with Mrs Elizabeth Mary King (his common-law wife Lela Marie, usually assumed to be his legal wife.)

It was around this time that Cody became interested in kites. Leon also became interested, and the two of them competed to make the largest kites capable of flying at ever increasing heights. Vivian too became involved. After a great deal of experimentation, financed by his shows, Cody patented his famous design in 1901, a winged variation of a double-cell box kite designed by Lawrence Hargrave. He offered this version for spotting to the War Office in December 1901 for use in the Second Boer War, and made several demonstration flights of up to 2,000 ft in various places around London.

A large exhibition of the Cody Kites took place at Alexandra Place in 1903. Later he succeeded in crossing the English Channel in a canoe towed by one of his kites. His exploits came to the attention of the Admiralty, who hired him to look into the military possibilities of using kites for observation posts. He demonstrated them later that year, and again in 1908 when he flew off the deck of battleship HMS Revenge on September 2.

Cody's interests turned to gliders, based largely on his kite designs. He built a glider and flew it a number of times in 1905. It eventually suffered damage in a hard landing and was not repaired. This was because the British Army had since become sufficiently impressed in his kites to hire Cody as Chief Instructor in Kiting at the Balloon School in Aldershot in 1906. Cody was charged with the formation of two kite sections of the Royal Engineers. It was this group that would evolve over the years into Air Battalion, Royal Engineers; No.1 Squadron, Royal Flying Corps; and then finally No.1 Squadron Royal Air Force.

During this period he also built a motorized kite that he wanted to develop into a man-carrying aeroplane. However the Army was more interested in airships, and during 1907 he was part of the team at Aldershot making the Nulli Secundus, England's first powered airship. On October 5 the Nulli Secundus flew from Aldershot to London in 3 hours 25 minutes with Cody, the principle designer, J. E. Capper, and an observer, Lieut C. M. Waterloo, onboard. After circling St Paul's Cathedral they attempted to return to Aldershot, but 18 mph headwinds forced them to land at Crystal Palace.

Later that year the Army decided to fund the completion of his aeroplane design, The Cody British Army Aeroplane No.1. After just under a year of construction he started testing the machine in September 1908, gradually lengthening his "hops" until they reached 1,390 feet on October 16. The machine was damaged at the end of this flight, which was announced as the first official flight of a heavier than air machine in the British Isles. The War Office then decided that there was no future in aeroplanes, and Cody's contract with the Army ended with no funds for repair.

Cody continued on his own however, repairing the plane and receiving permission to use Laffan's Plain for his test flights. On June 7th 1909, Cody received Royal Aero Club certificate number 9. Cody carried passengers for the first time in the world on August 14, first his old workmate Col. Capper, and then Lela Cody (Mrs Elizabeth Mary King). Cody made a world-record cross-country flight of 1 hour 3 minutes on September 5.

In 1910, using a newly-built aircraft Cody won the prestigious Michelin Cup with a flight of 4 hours 47 minutes. In 1911 with a different aircraft, the Flying Cathedral, then the largest aircraft in the world, was the only British plane to complete the round-England race, finishing fourth. This plane was then fitted with a new 120 hp (90 kW) engine, and won the £5,000 Military Trials on Salisbury Plain in 1912.

Cody continued to work on aircraft using his own funds.

1913 August 7th. Died. Cody was out for a joyride in his latest design, a floatplane, when it broke up at 500 ft and he and his passenger W. H. B. Evans were both killed. He was buried with full military honours in the Aldershot Military Cemetery; the funeral procession drew an estimated crowd of 100,000.

Adjacent to Cody's own grave marker is a memorial to his only son, Samuel Franklin Leslie Cody, who joined the Royal Flying Corps and 'fell in action fighting four enemy machines' in 1917.