Grace's Guide is the leading source of historical information on industry and manufacturing in Britain. This web publication contains 146,052 pages of information and 231,597 images on early companies, their products and the people who designed and built them. 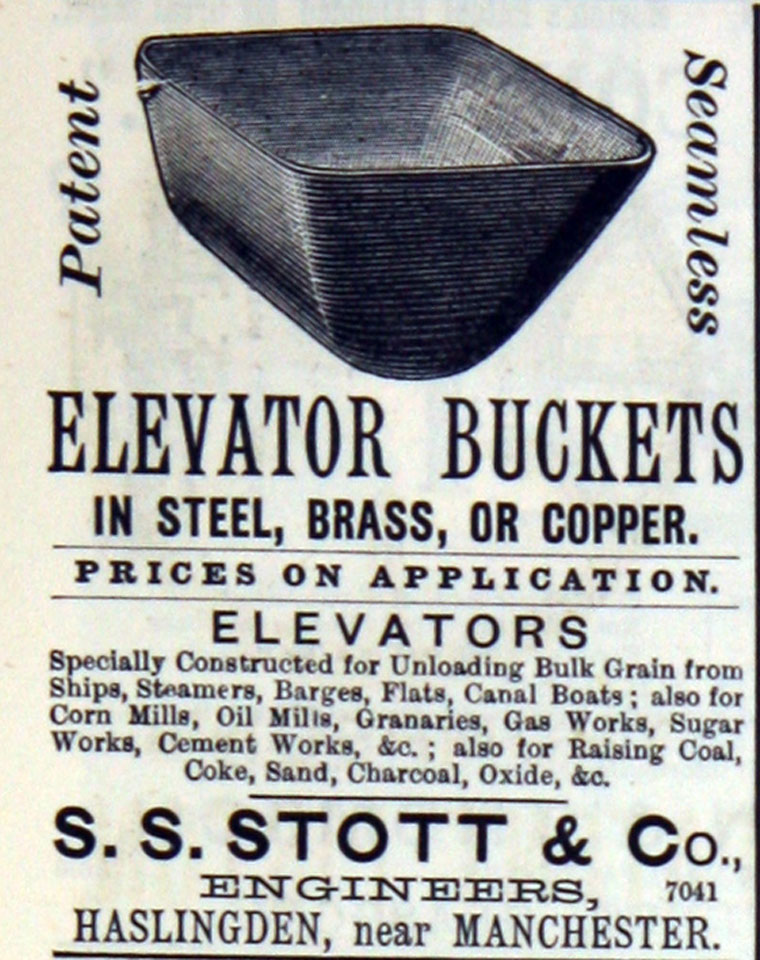 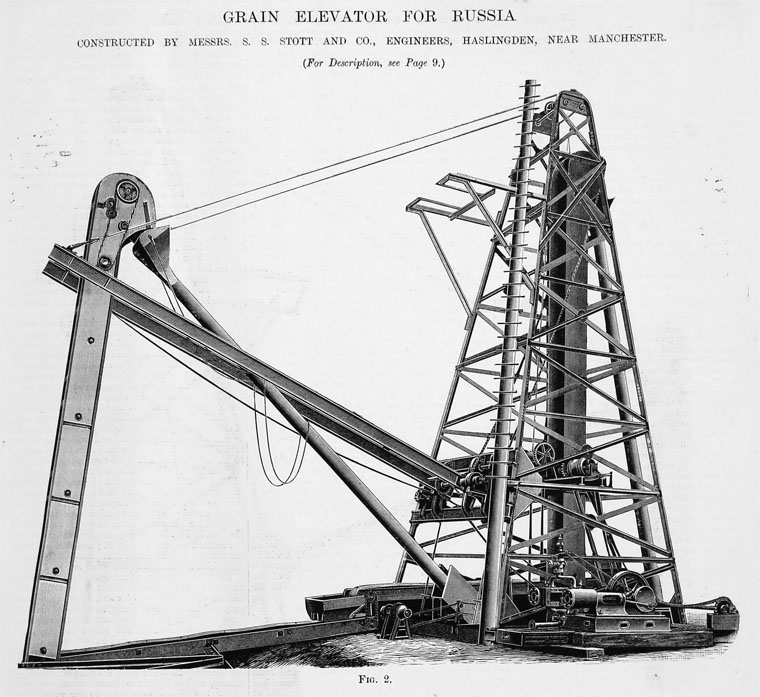 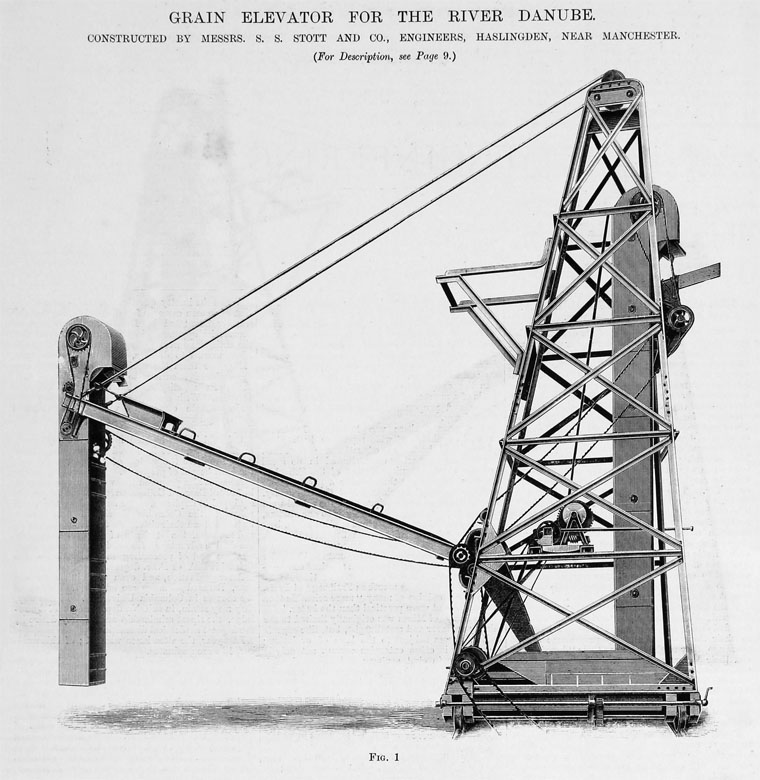 1897. Grain Elevator for The River Danube.

of Laneside Foundry, Haslingden, near Manchester.

Mill engine installed at Carr Parker Mill in Haslingden, then moved to Cudsworth’s Mill at Sowerby Bridge, and now at the Canadian Museum of Making.[1]

c.1875 Supplied a horizontal compound engine for the Crescent Mill, Todmorden, of Gledhill, Ashworth and Co. 9" and 15" cylinders. In 1877 the 7 ft diameter flywheel burst, killing Samuel Fielden. See Crescent Mill, Todmorden entry for more information. The inquest found that the engine had on occasion run too fast, and that arms of the governor had failed several times, and been repaired. The method of construction of the flywheel was criticised. Luke Barlow of Stott & Co was called as a witness. He was a draughtsman, and said that he been with the firm 16 or 17 years (this was presumably the Laneside Foundry, as S. S. Stott & Co had only been in business for 11 years. Barlow stated that they had supplied an engine with a similar governor and flywheel to John Hargreaves of Crawshawbooth, and no problems had been reported. The governor arms were made of brass, for no obvious reason. 'The Coroner pointed out that the witness's [Luke Barlow's?] evidence was greatly of a negative character. He admitted the insecurity both of the links and the governors, and, as they all knew, an insecure principle might work for an indefinite time, but it would break down at last. It was possible that, by a great deal of the weight upon the engine being removed [weavers stopping their looms because of excessive speed], the velocity of the fly-wheel might be sufficient of itself to cause the wheel to break away wholly. The jury retired to consider their verdict, and, after an absence of nearly half an hour, returned, having found that, "In the opinion of the jury, the death of Samuel Fielden was accidentally caused by the breakdown of a stationary steam engine at Crescent weaving-shed, Todmorden, on the 24th February." The jury were further unanimously of opinion that the breakdown was caused by the breaking of the arm of the governor balls, and that the links binding the rim of the fly-wheel of the engine together were not of sufficient strength.'[2]

1896 'Large Pumping Engine.— A number of engineers were enabled by the kindness of Messrs. S. S. Stott and Co., Laneside Foundry, Haslingden, to examine a powerful pumping engine made by them for Kenley, near London, which will raise water from a depth of 125 feet, and afterwards force it 500 feet, at the rate one thousand gallons per minute. It will duplicate a pumping engine supplied by the same firm some years ago, and which, though working night and day since its erection, has given complete satisfaction. The visitors displayed great interest in examining the excellent construction of the engine.'[6]

1899 'NEW ENGINE BED AND BOILER.— The large firm of Messrs'. Mitchell, Bros., Limited, are stopped this week for stocktaking. At their Sissclough works a new boiler and a new engine bed are being put in, the former by Messrs. Tinker Bros., Ltd., Hyde, and the latter by Messrs. S. S. Stott and Co., Laneside Foundry, Haslingden. This will cause a somewhat prolonged stoppage at this mill.'[7]

1907 'A LONG STOPPAGE. Messrs. Carr and Parker, Ltd.. of Charles-lane Mill, Haslingden, have decided to replace the beam engine which broke clown under alarming circumstances on Monday noon of last week, with a new horizontal engine of 350 indicated horse-power to be built by Messrs. S. S. Stott, of Laneside Foundry, Haslingden. A new engine house is also necessitated, and it will be three months before the new engine can be got to work. Meanwhile the firm are continuing to run portions of the mill by means of a smaller engine and in two shifts of eight hours each, and this arrangement is very much appreciated by the hands. About 100 looms cannot, however, be run.'[8]. George Watkins photographed the engine in 1968, and described it as quiet and highly efficient. It was a tandem compound, cylinders 15" and 27" by 3ft 6" stroke, running at 85 rpm. Benn patent condenser and air pump.[9]