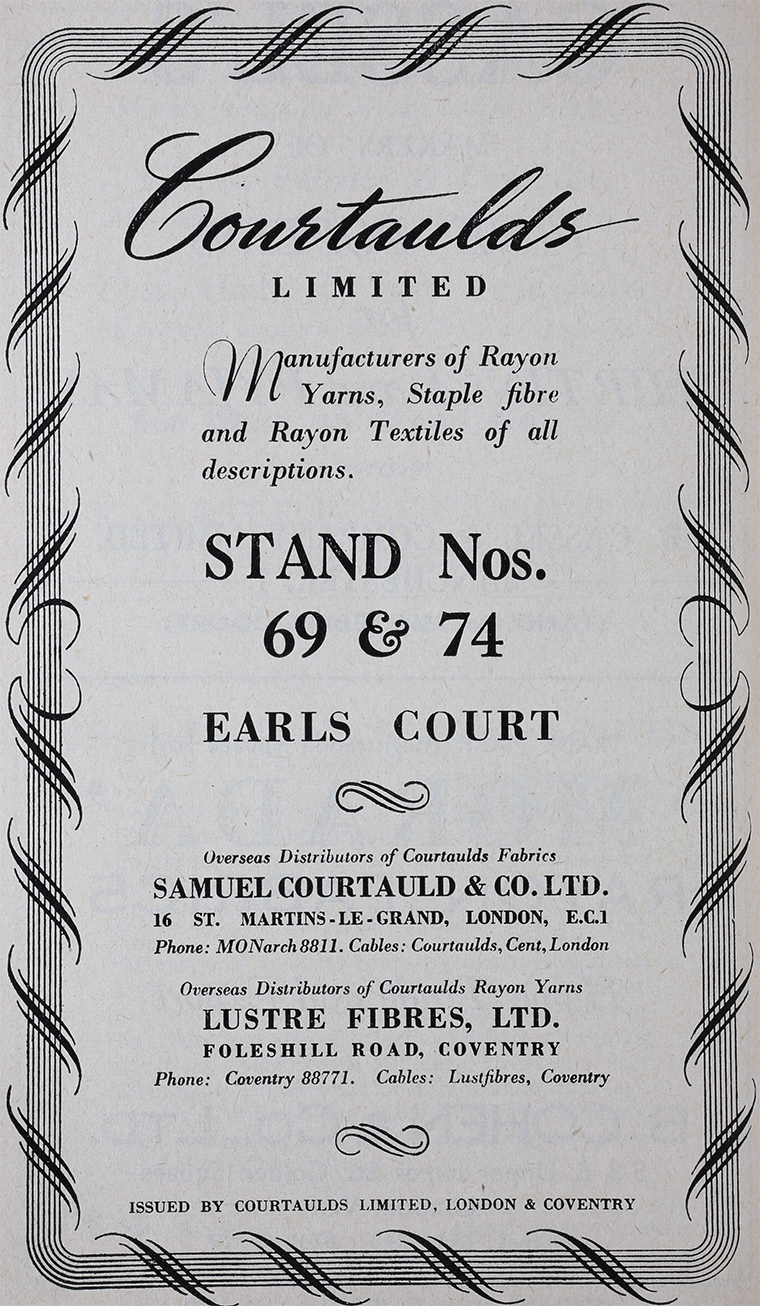 The Courtauld family was descended from Augustine Courtauld, son of a Huguenot refugee who settled in England in 1685; the family were silversmiths.

1775 George Courtauld (1761-1823), great-grandson of Augustine, was apprenticed to a Spitalfields silk weaver and set up as a silk throwster.

1785 George made the first of a number of trips to America where, in 1789, he married Ruth Minton.

1794 Shortly after their son, Samuel's, birth, George and Ruth returned to England

1798 George set up in business at a mill at Pebmarsh, Essex, manufacturing silk, crepe and textiles - George Courtauld and Co with his cousin Peter Taylor (1790-1850) - before moving to a larger mill at Bocking. George Courtauld was an enterprising, restless character, temperamentally unsuited to working in a partnership.

1814 George Courtauld was granted a patent for an improved spindle

By 1816 Samuel's position, and that of his family, was financially perilous. Samuel set up in business on his own account as a silk throwster in a small mill at Bocking, Essex.

George settled in Ohio where he purchased large tracts of land on which he settled some of his family. He inspired all, apparently, except his son Samuel, with his vision of founding a new order of society in Ohio. He was a friend of Robert Owen, also a textile manufacturer who had founded the similar Owenite Settlements. George often wrote to his son Samuel, who was managing and expanding his own silk mills in Braintree, Halstead and Bocking, urging him to give up textiles and come 'to the land of opportunity'. But Samuel did not emigrate and continued steadfastly to expand Courtaulds through subsequent centuries. His father died in 1823.

1825 Samuel installed a steam engine at the Bocking mill, and then installed power looms at Halstead.

His mills remained heavily dependent on young female workers – in 1838, over 92% of his workforce was female.

By 1850, Courtauld employed over 2,000 people in his three silk mills. By this time Courtauld was a very wealthy man but was also suffering from deafness.

A boom in black crape developed in Victorian England as the ritual of mourning was formalised, publicised, and commercialised. Samuel Courtauld and Co did very well out of this, becoming the country's biggest manufacturer of mourning crape. Until crape began to fall from fashion in the 1880s, the partners were regularly earning well over 30 per cent on their capital.

1859 Patent to John Minton Courtauld, of the firm of Samuel Courtauld and Company, of Braintree, in the county of Essex, Crape Manufacturers, has given the like notice in respect of the invention of "an improvement in clearing and preparing silk-crapes, aerophanes, and other like fabrics, lisses, and other gauzes and lace, and in machinery employed therein."[2].

1866 Partnership change. '...the Partnership between us the undersigned, Samuel Courtauld, John Minton Courtauld, and Peter Alfred Taylor, carrying on business under the firm of Samuel Courtauld and Co., as Silk and Crape Manufacturers, Silkmen and Silk Throwsters, and Engineers, at Aldermanbury, in the city of London, and at Booking, Halstead, Braintree, and Chelmsford, in the county of Essex, has this day been determined, so far as regards the said Peter Alfred Taylor, who retires from the same on and from this day...'[3]

1904 The company was registered on 1 July, to take over the business of manufacturers of crepe and dress fabrics of the company of the same name. [5]

1905 Having acquired the patents of Charles F. Cross and Edward John Bevan, the company erected a factory at Coventry to make viscose rayon.

1910 Set up the American Viscose Co., which later became larger than Courtaulds itself.