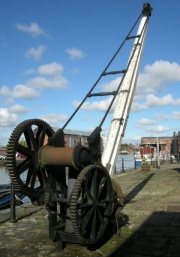 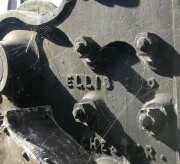 Detail of the Ellis crane at Gloucester

1845 Company established following dissolution of partnership of Ellis and Noton: Newspaper advertisement: 'I take the liberty of informing the Public generally, that I DISSOLVED the PARTNERSHIP existing between me and my late partner, Mr. NOTON, on the first day of January last, by mutual consent, and that the concern, heretofore carried in between us, will in future be carried on by me, under the firm of "Samuel Ellis and Co.". Allow me to return my my sincere thanks for your past favours to the late firm of Ellis and Noton, and to express a hope that the new firm of Ellis and Co. may be favoured with your future commands, and to assure you that no exertions on my part shall be spared to give you entire satisfaction. [Signed] SAMUEL ELLIS and CO. N.B.—Any persons having a claim against the late firm of Messrs. Ellis and Noton, are respectfully requested to send in their account forthwith to S. Ellis and Co., that the same may be examined and discharged. Irwell Foundry, Stanley-street, Salford.' [1]

1845 Newspaper report: 'Messrs Ellis & Co., ironfounders, Stanley-street, Salford, have just constructed a crane for the London and Birmingham Railway Company, on an improved principle, occupying a very small space as compared with the immense power it possesses. Its dimensions and capabilities &c., are as follow: it has a large spur wheel, which is 7 feet 10 inches diameter, with a 15-inch pinion ; the small spur wheel is 5 ft 9 inches in diameter. The foundation plate is 11 feet in diameter; the height of the jib is 20 feet, with a radius of 20 feet; the jib is of the best English Oak; the centre pillar is 23 feet in length, and 2 feet six inches in diameter ; the total weight of the crane is 25 cwt. It has been tested, and has borne 25 tons with the greatest ease. Indeed, Messrs. Ellis and Co say, they have not the slightest doubt that it is quite strong enough to bear the enormous weight of 40 tons. On the whole, this machine has a most massive, substantial and workmanlike appearance. Messrs. Ellis and Co., forwarded a crane similar in every respect to this under notice, to Birmingham a few days ago, whither one just described will quicklv follow it, to be put into active service.' [2]

1845 A separate newspaper report included some additional information: 'Improved Crane.—We had yesterday an opportunity of inspecting a large crane on an improved principle, which has recently been constructed by Messrs. G. Ellis and Co. of the Irwell Foundry, Salford, for the London and Birmingham Railway Co., and which possesses great advantages over the common crane. The space it occupies is extremely small in proportion to the power which it is capable of exerting; the foundation plate is not more than 11 feet in diameter, while its power is as 461 to 7. The radius of the crane is 20 feet, and its height 20 feet; and the masonry of the foundation will not occupy more than 16 feet square. Another important advantage possessed by this instrument is the facility with which the motion can be altered or regulated, so as to adapt it to raising either great or small weights. One on the same construction has already been supplied to the London and Birmingham Co. and is in use at the Camden Town Station ; it was tested on Saturday last and found equal to a weight of 25 tons. The one now at Messrs. Ellis's is to be delivered at Birmingham whither it will be conveyed next week.' [3]

1853 Newspaper report: 'Fatal Accident in Salford — Two Men Killed. On Wednesday an accident occurred at the Irwell Foundry, Stanley-street, Salford, conducted by the executors of the late Mr. Samuel Ellis, by which two young men, named William Reece and Robert Evans, met with an untimely death. The deceased were engaged in one of the workshops in moving a mass of iron, weighing five tons, by means of a travelling crane, about twenty feet above the floor, when one of the balks of timber supporting the crane suddenly broke in two, causing the young men and the machinery instantly to fall upon the floor below. Reece was 21 years of age, and fell head foremost to the ground, and when picked up was found to have sustained a fracture of the skull, and also of the right arm, of which he died almost instantly. Evans was seventeen years of age, and appeared to be labouring under severe concussion of the brain when taken up by his fellow-workmen. A surgeon was sent for, but he arrived too late, as the unfortunate deceased expired about ten or fifteen minutes after the accident. An inquest was held the same evening on the bodies, by Mr. G. O. Rutter, deputy coroner, when it was stated that the balks of timber on which the crane was supported, had iron tie-rods running underneath them longitudinally, which had been placed there to strengthen them. One of these rods, at its junction with the timber, had broken, owing to an old fault or partial fracture which had not been observed, and had thus led to the balk instantly snapping asunder underneath one end of the crane.— James Stevenson, a workman present at the occurrence, told the jury that the whole weight of the five tons was not on the crane at the time; they had been turning the iron over, and they had lifted up one end when the apparatus gave way. They had lifted the same piece of iron with the crane about three weeks ago, and they had once raised a piece of machinery weighing ten tons with it.—Another witness, named Stewart, stated that he was standing on one end of the beam when it gave way, and he had only just time to step on to the platform to save himself.—The jury returned a verdict of "Accidental death" '[5]

At some point the business became known as H. and J. Ellis

A short biography of Samuel Ellis is available online [6]