(Redirected from Sanderson and Sons)
Jump to: navigation, search 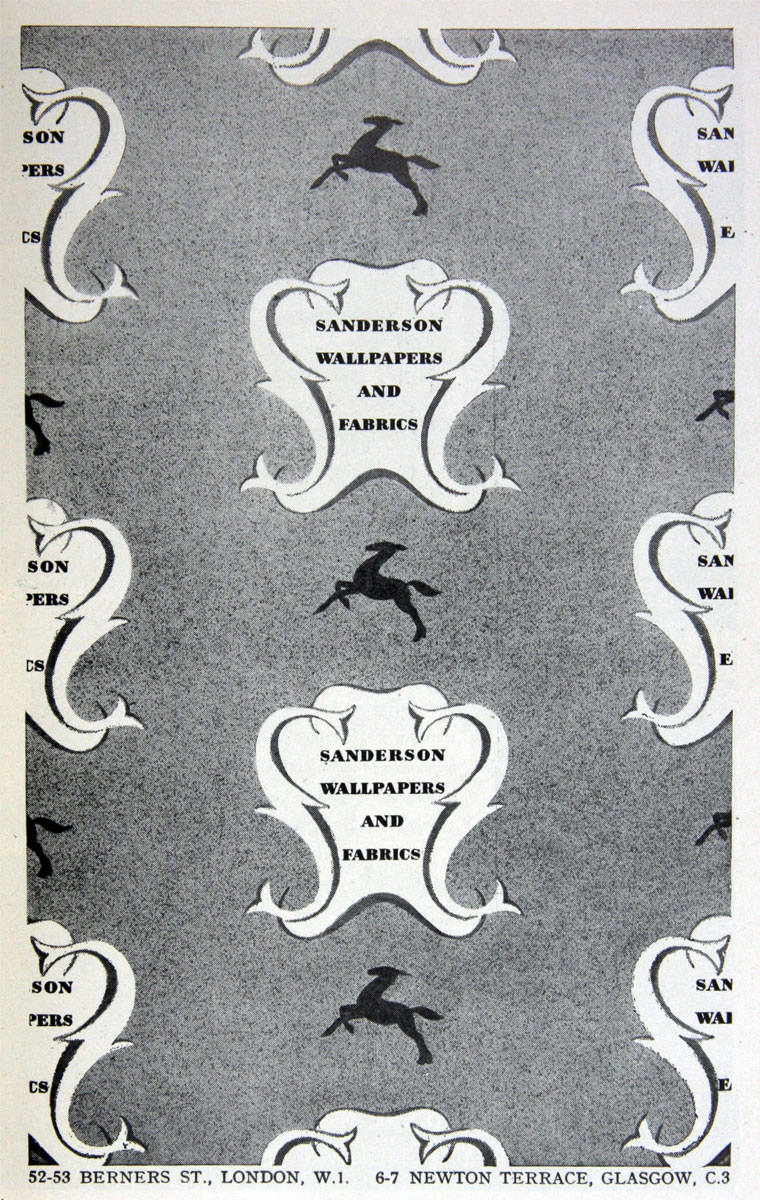 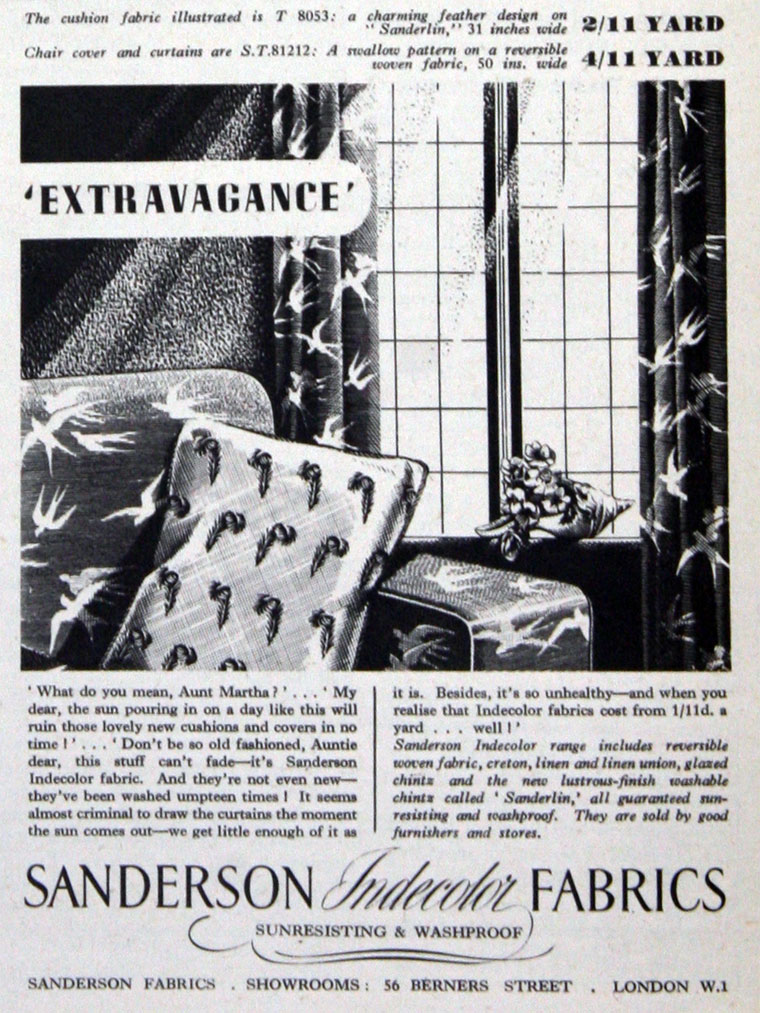 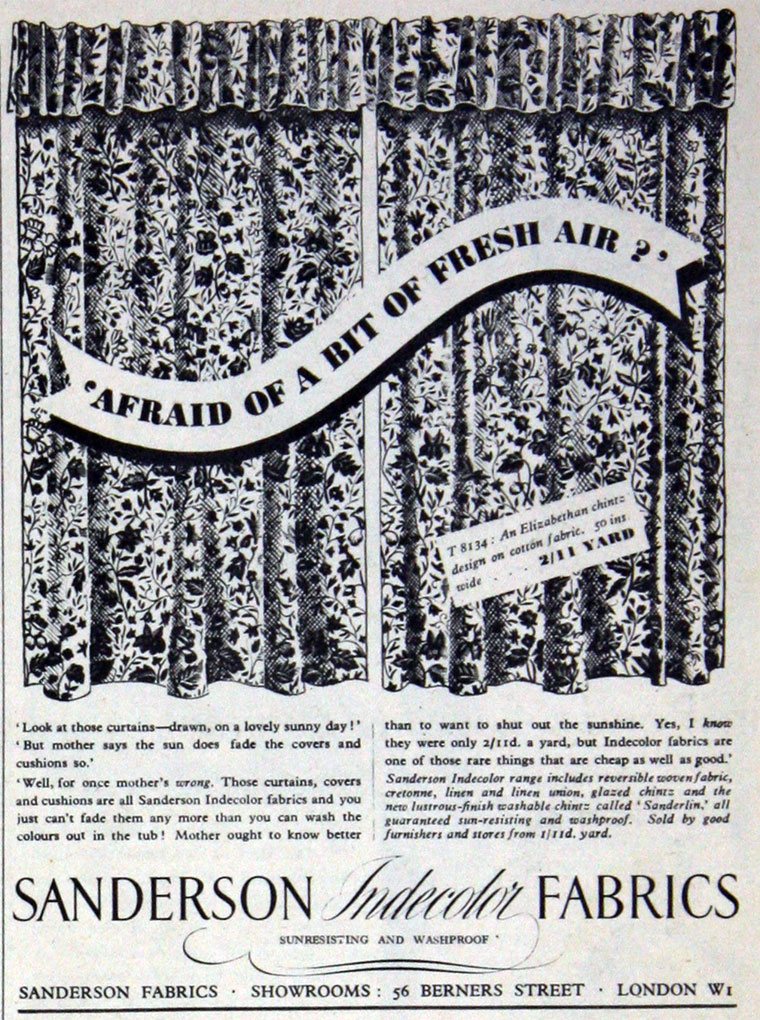 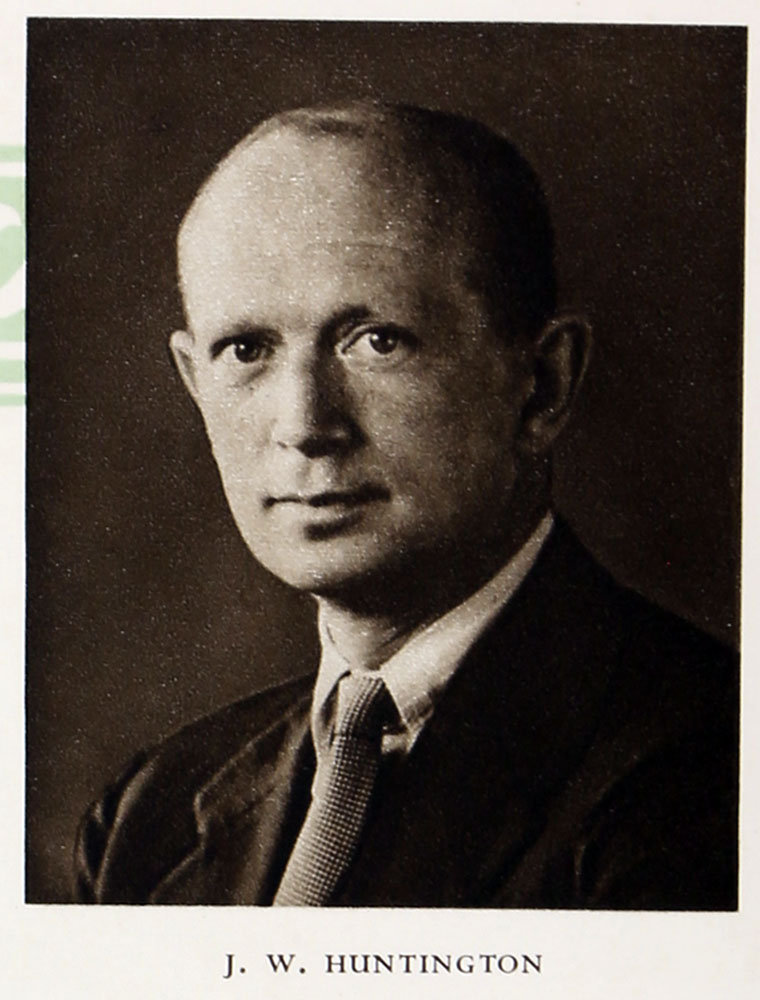 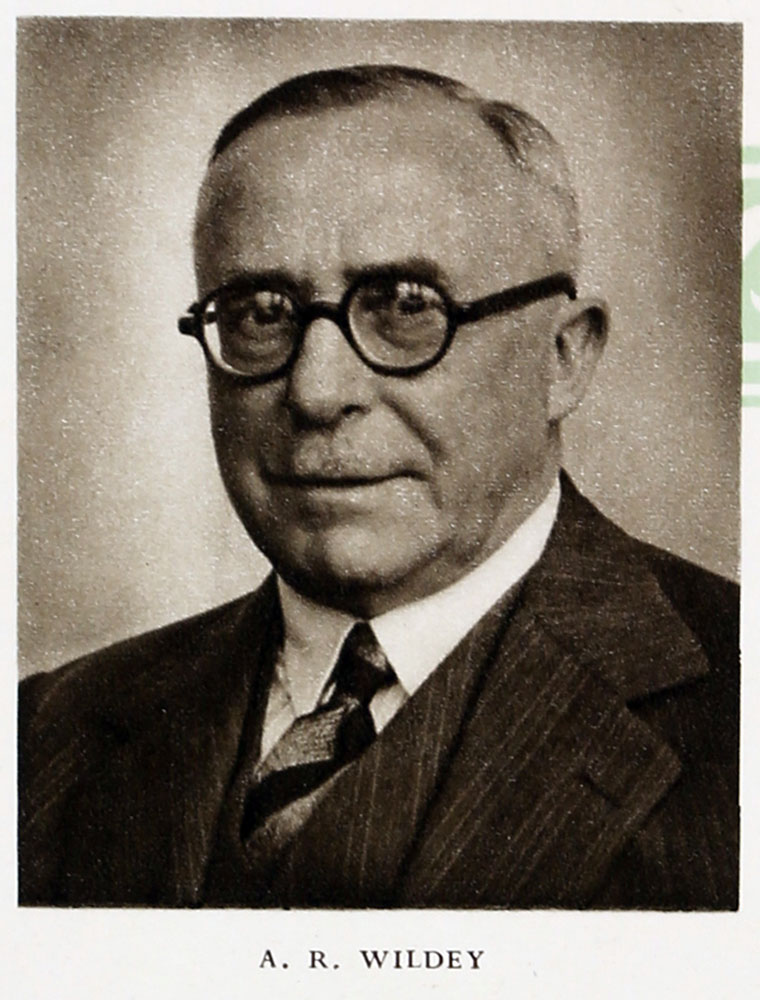 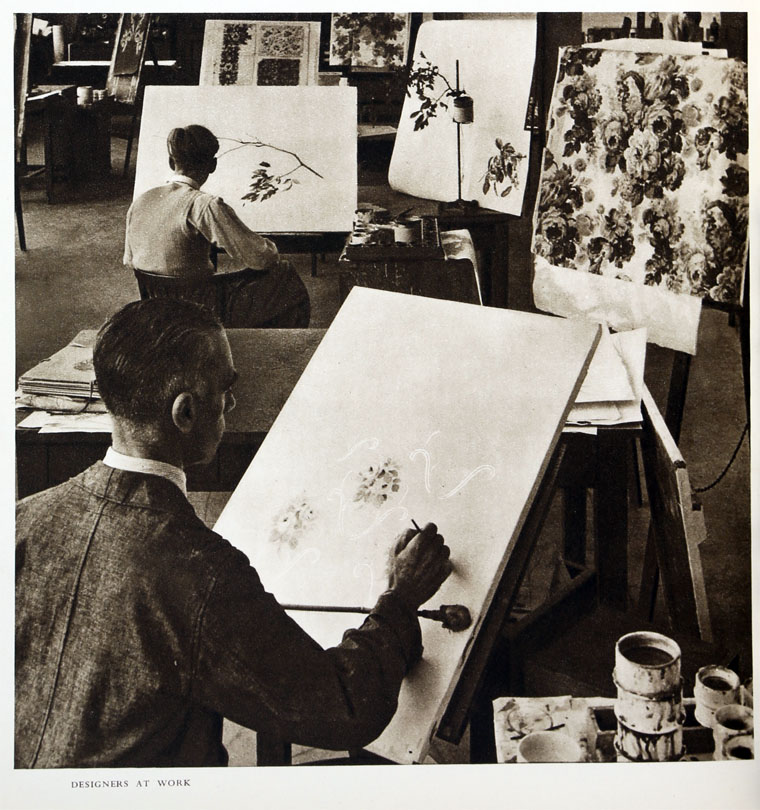 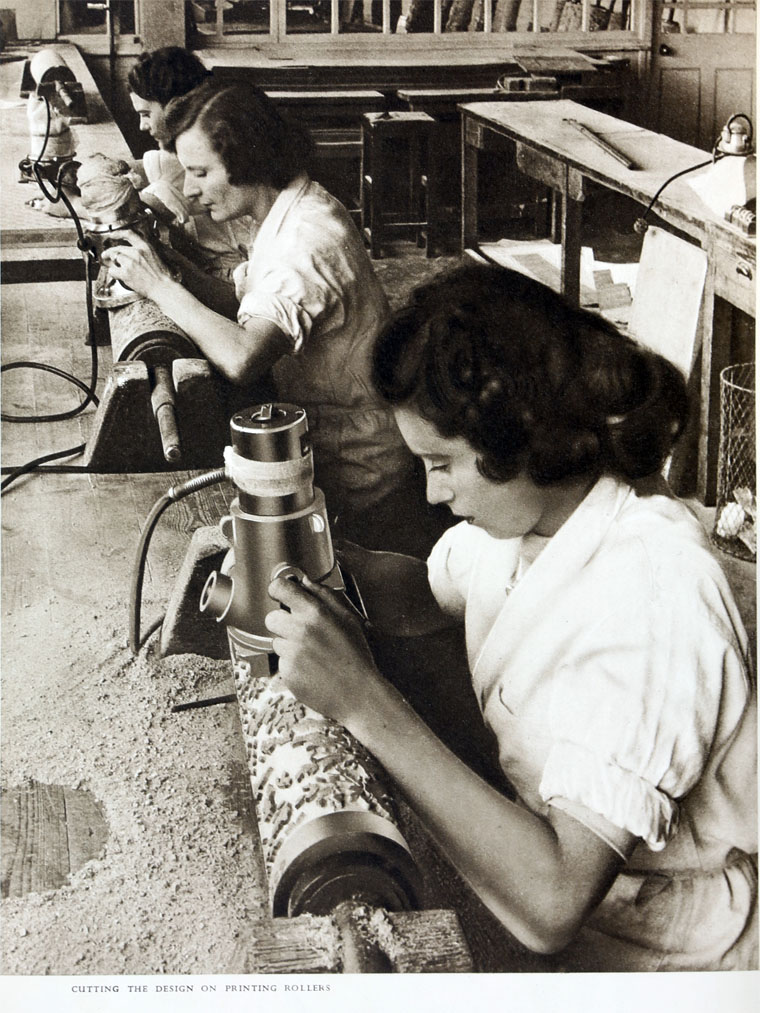 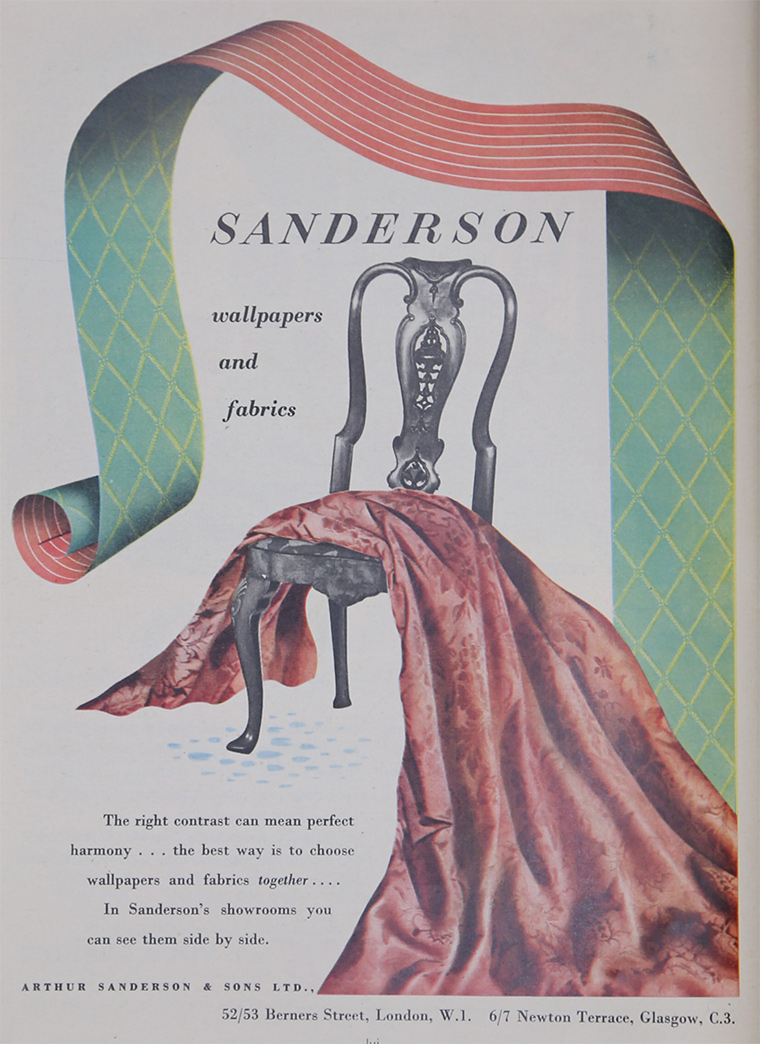 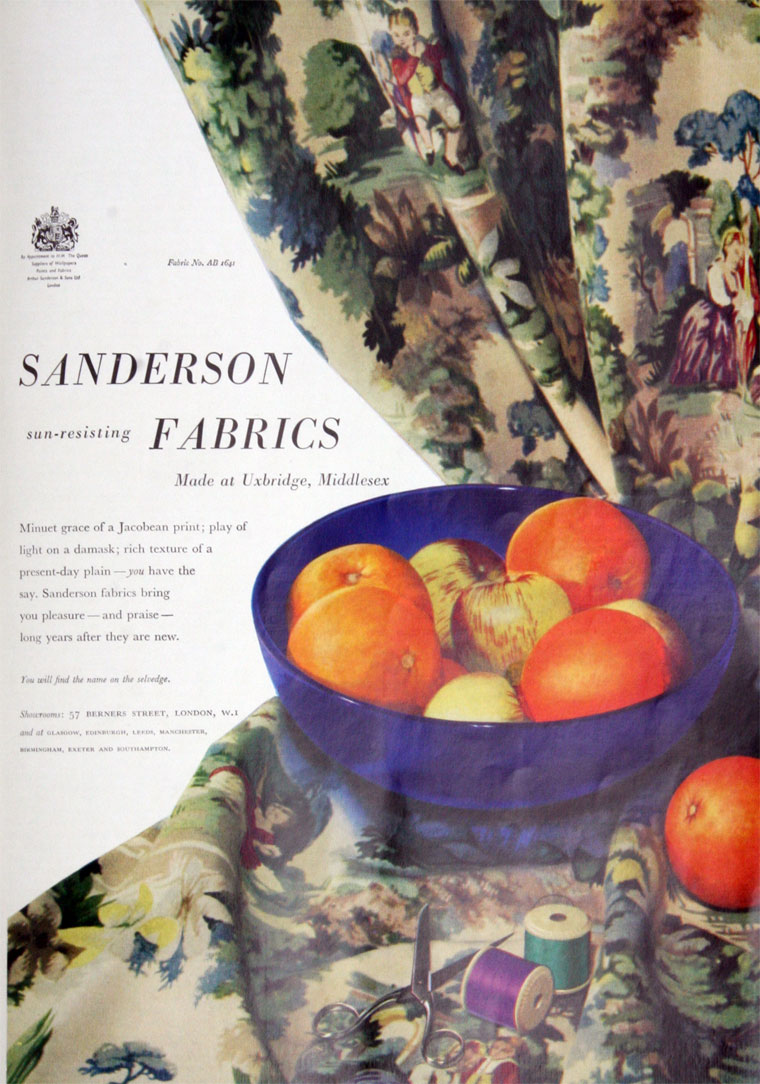 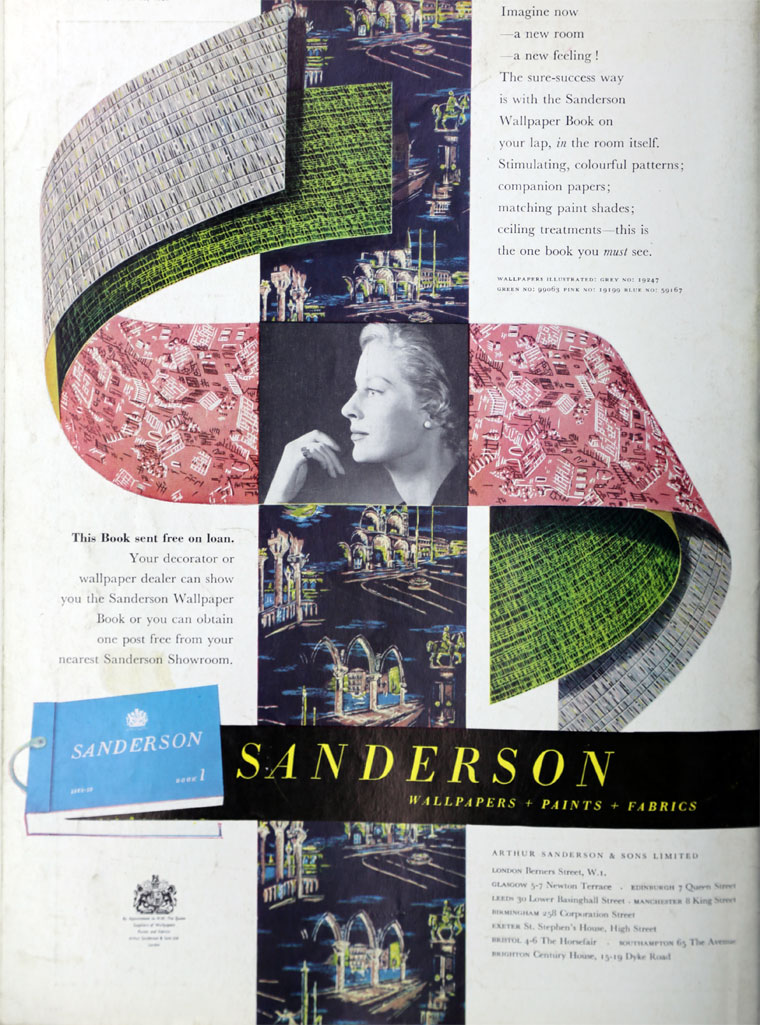 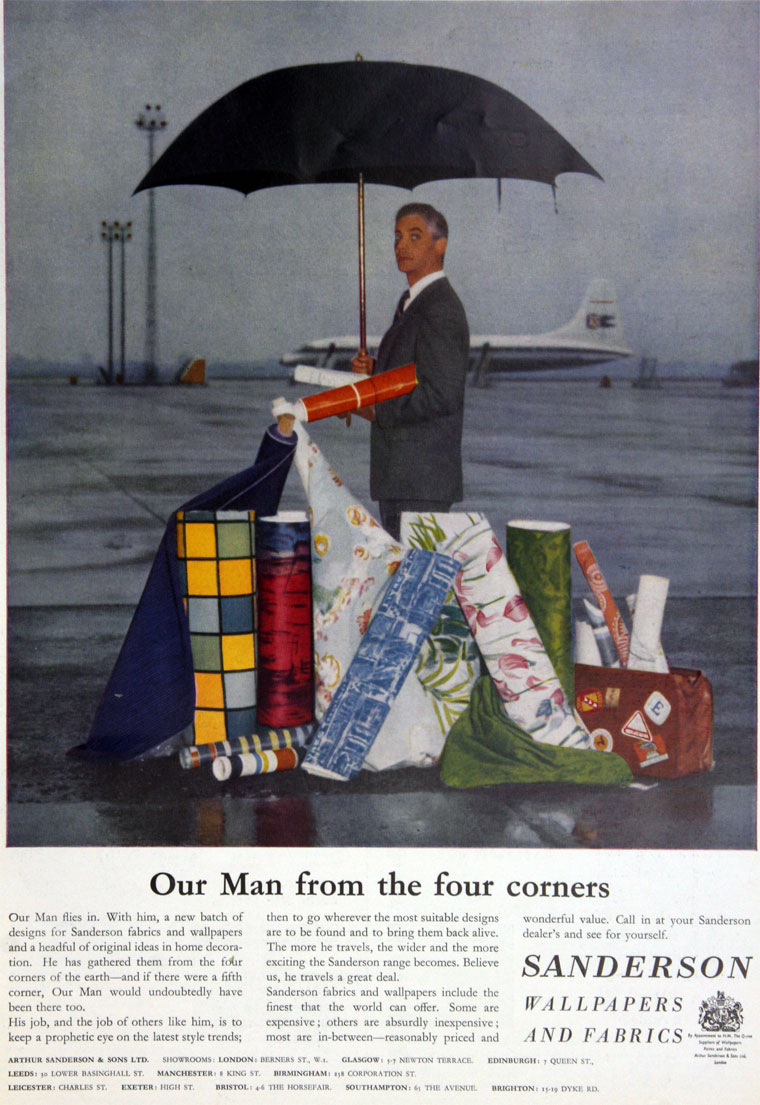 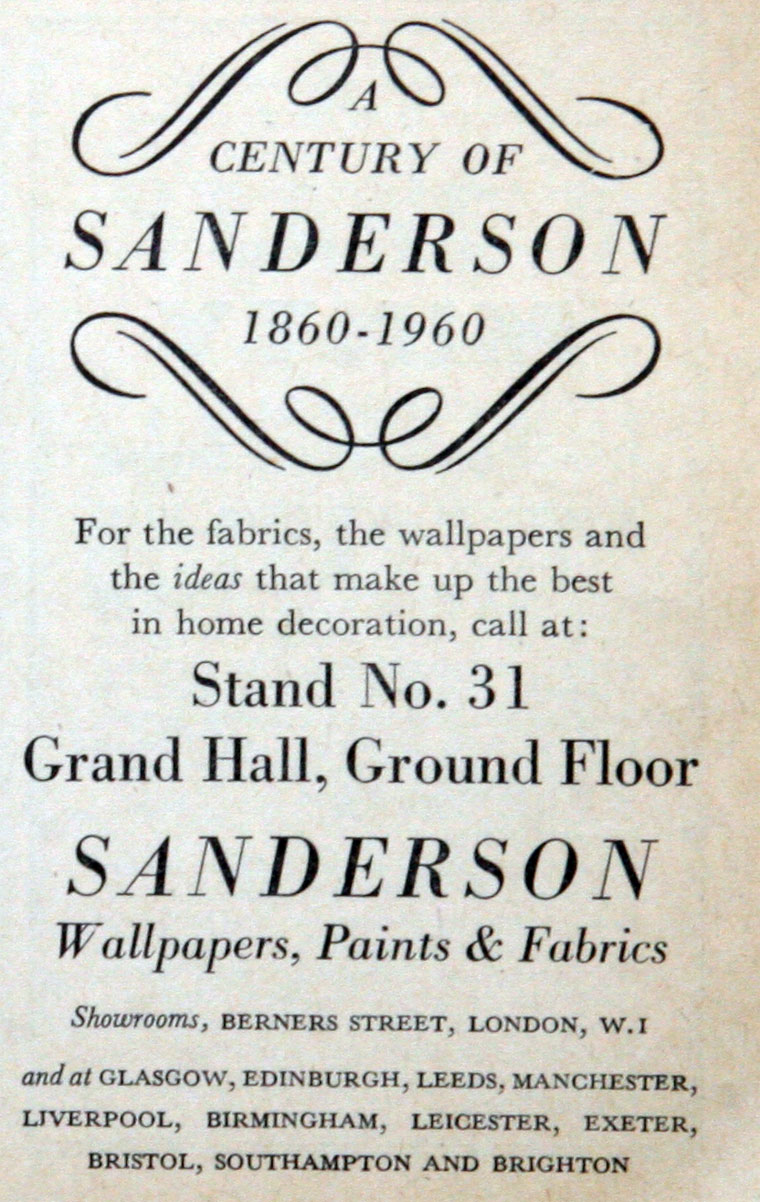 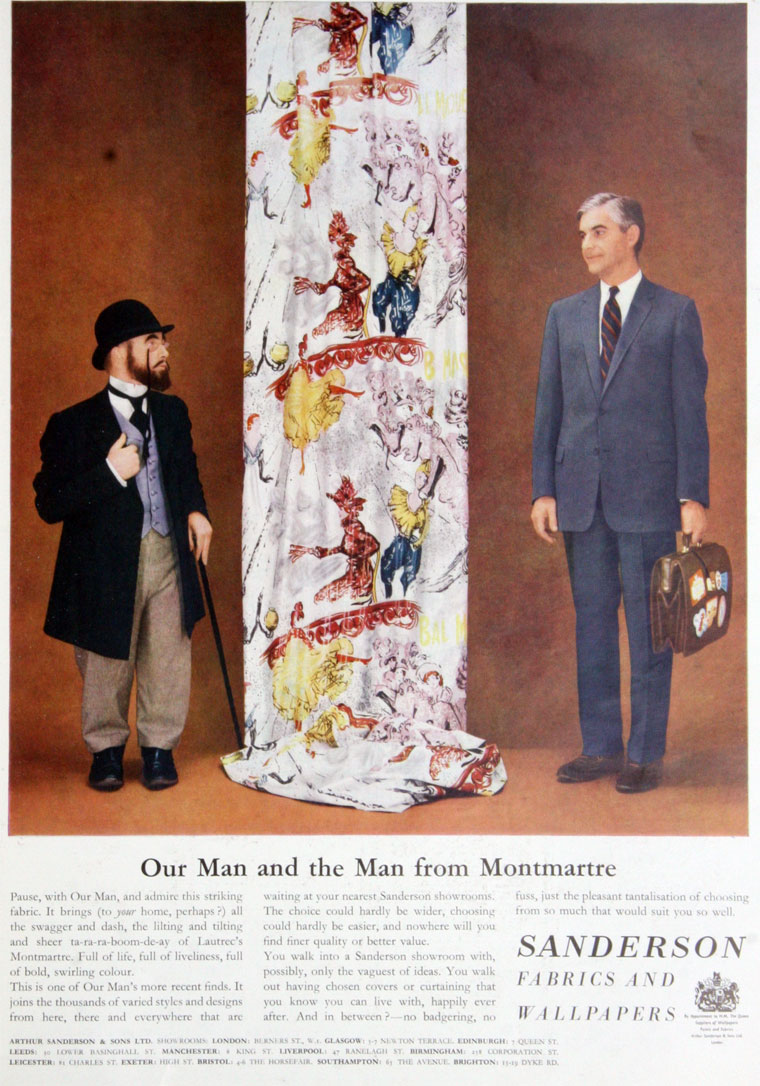 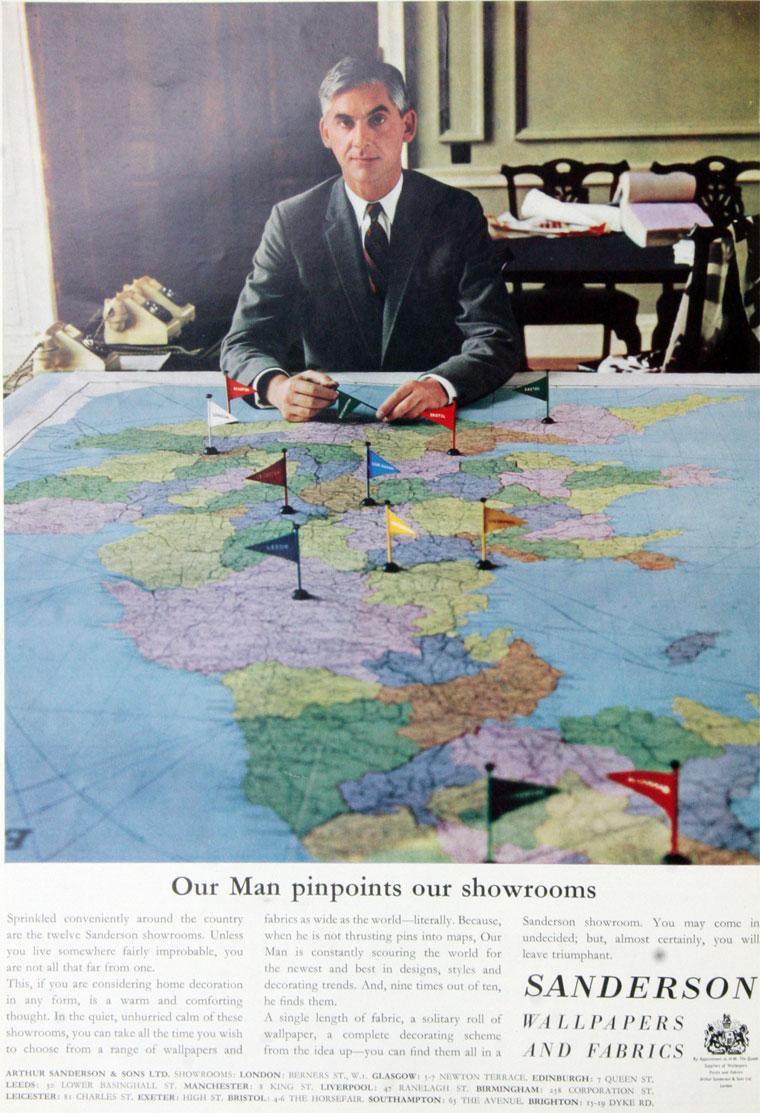 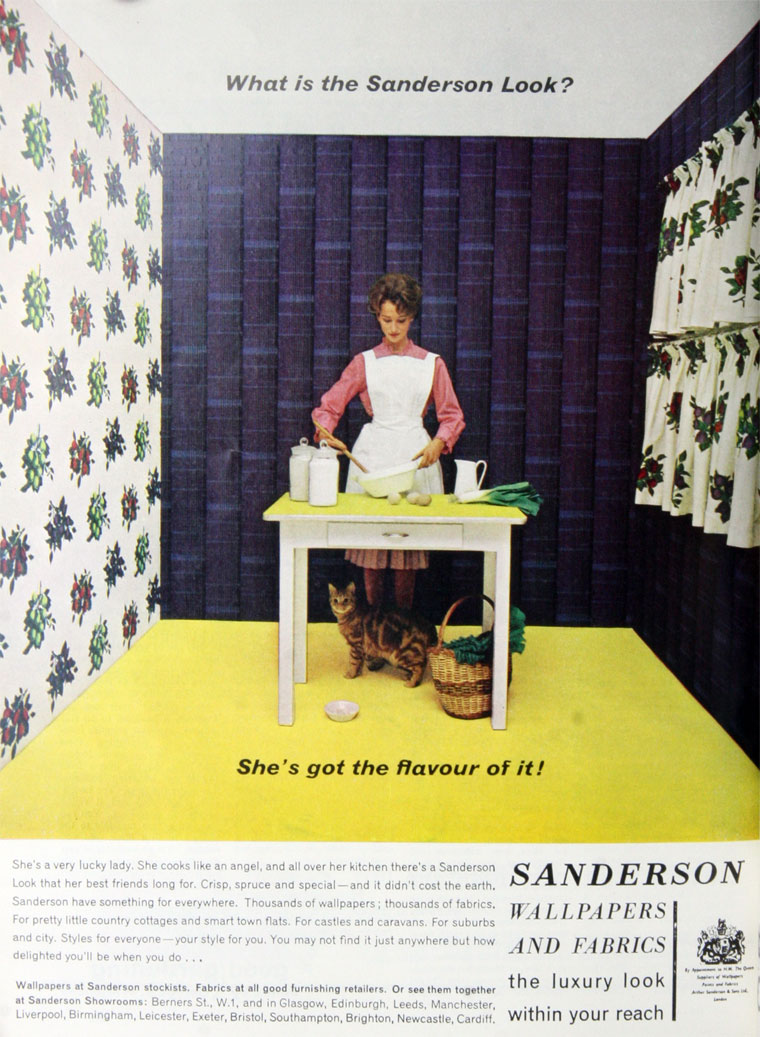 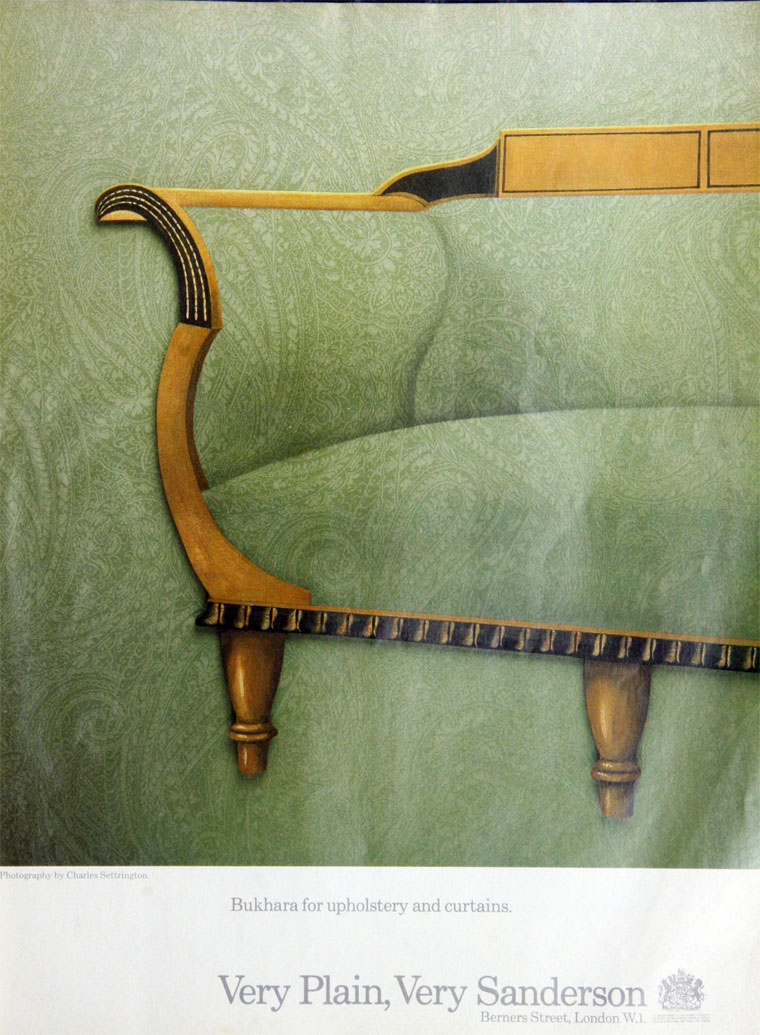 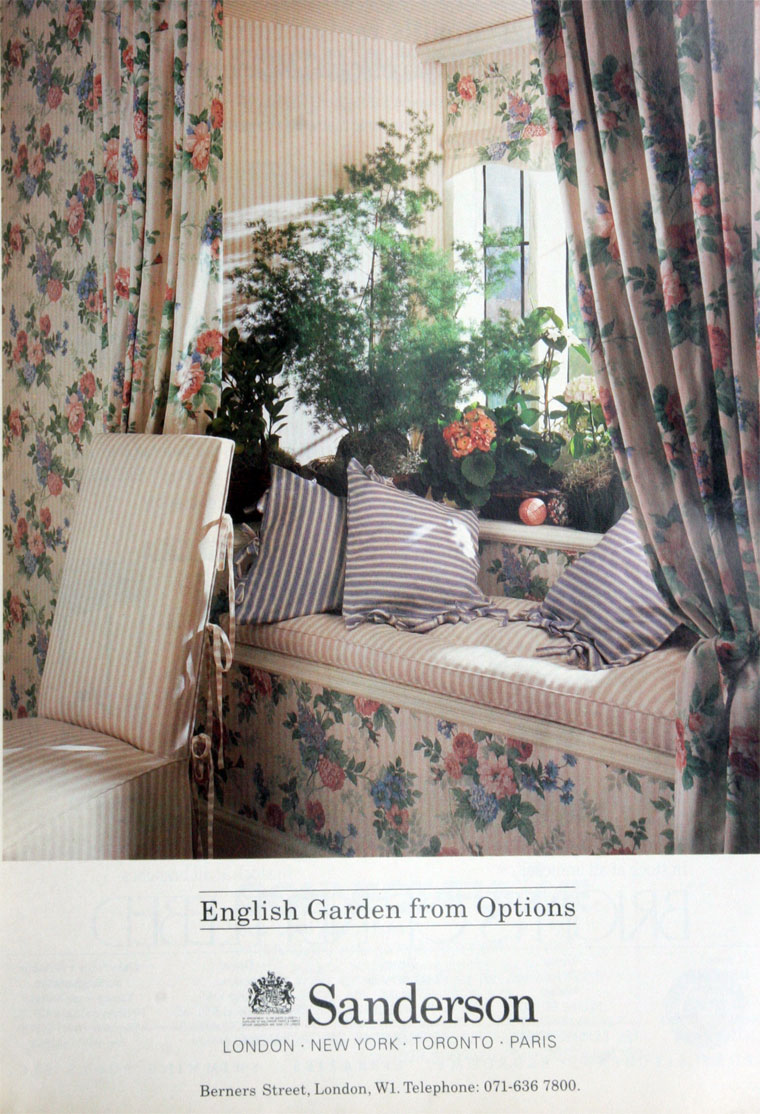 Arthur Sanderson and Sons, wallpaper designers and manufacturers of London

1860 Arthur Sanderson founded the firm - see A. Sanderson and Sons. From his premises in Soho Square, London, he distributed American, French, Japanese and English products, becoming one of the leading wall covering merchants in Britain.

By 1865, the Sanderson family and business moved into larger premises at 52 Berners Street in London’s West End.

1879 It soon became evident that current sources of wallpaper could not meet the rising demand and changing tastes of the public. Conscious of this, Arthur established his first wallpaper factory in Chiswick. Initially, all printing was by hand, however the first surface machine was soon installed.

1882 only three years after production commenced, Arthur Sanderson died, leaving his sons John, Arthur and Harold in charge of the business. Despite their youth the business prospered. The first printing machine was joined by seven more and the staff increased from 40 to 300.

1902 Technical improvements initiated by Harold, who was in charge at Chiswick, reaped their rewards. In 1902, to meet growing consumer demand, the factory was given a new extension designed by the celebrated Arts and Crafts architect and designer C. F. A. Voysey. The Voysey extension still stands today being used as business units.

1921 The First World War had interrupted continued expansion. A second factory was opened in 1921 in Uxbridge for the production of printed fabrics.

1923 This period of success culminated when Arthur Sanderson and Sons was awarded the Royal Warrant as Purveyors of Wallpapers to the King.

1928 a fire devastated the Chiswick works, destroying some of the firms premises, equipment and records.

1929 Arthur Sanderson and Sons was acquired by WPM. Consequently wallpaper production was relocated to a new custom–built factory, set in 80 acres of land in Perivale. This state-of-the-art factory was described in the press as "the finest wallpaper mill in the world..."

By the end of the 1920s business had grown sufficiently to warrant further expansion. The brand name was soon changed to "Eton Rural Fabrics", to reflect the increasing variety of cloth types produced by the firm; soon after the name was yet again changed to Sanderson Fabrics.

1930 Wallpaper production recommenced, and remained on the Perivale site until 1975.

1940 Purchased the William Morris Company, together with all the printing blocks, showroom wallpaper and fabric samples, stocks and stand books for £400. The block printed wallpapers continued to be produced at Sanderson's Perivale factory.

WWII. During the War, the Perivale factory undertook all kinds of work, including the production of aircraft camouflage, silk screening of Red Cross haversacks and experimental work with anti-radar equipment.

Post-WWII. It took some years after the war to return to normal production; initially all new product was destined for overseas markets.

1950 The post-war period however, marked the start of an era of great prosperity and growth and, in 1950, Sanderson added a large new extension to its Uxbridge factory.

1955 the company was granted a further Royal Warrant as suppliers of wallpapers, paints and fabrics to H.M. Queen Elizabeth II

1960 Sanderson celebrated its 100th birthday in style by not only extending and enlarging its relatively new factory in Uxbridge, but also rebuilding the new showroom, a contemporary 8-storey structure some 230 feet long built on the site of 58/60 Berners Street. The Centenary Collection of wallpapers was also launched in celebration. The new Berners Street Showroom opened in February.

1965 Wall Paper Manufacturers was taken over by Albert E. Reed and Co. Sanderson became part of a newly formed Decorative Products Division together with Crown and Polycell.

During 1972 the famous Perivale factory was closed and all wallpaper production was moved to Gosport and Christchurch.

During 1985, WestPoint Pepperell Inc, of Georgia, USA, bought Sanderson in order to develop their expansion into Europe.

During 1987, Sanderson acquired the John Watson Wallpaper Mill in Lower Darwen, where all wallpaper production was moved to.

Printing remained on the famous 100 Acres Uxbridge site until December 1999; the majority of fabric printing is now undertaken by Standfast and Barracks of Lancaster. Sanderson’s reference collection contains a sample of every fabric printed by the firm from 1921 to the present day.

The most recent change of ownership was in August 2003, when Walker Greenbank PLC bought the business.

What was "Sanderson of Berners Street" is now The Sanderson Hotel, a Grade I listed building retaining all its original form. [1]