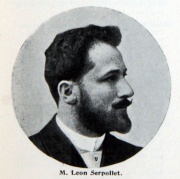 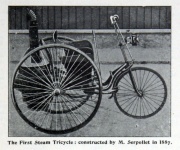 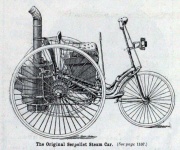 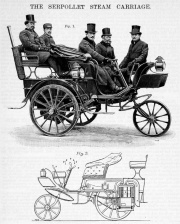 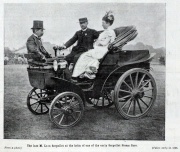 Leon Serpollet and one of his early steam cars. 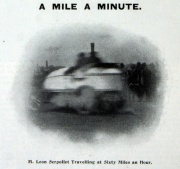 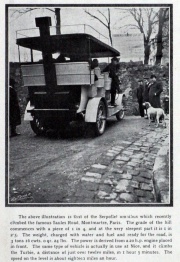 Besides being an inventor and manufacturer, Leon Serpollet became the first driver of a non-electrically powered car to hold the Land Speed Record. His ovoid steam car Oeuf de Pâques (Easter Egg) reached a speed of 75.06 mph over the flying kilometre on the Promenade des Anglais at Nice, France on 13 April 1902, exceeding the long standing record of Camille Jenatzy in La Jamais Contente.

1904 SERPOLLET, M. Leon. Takes a foremost position in the ranks of the pioneers of the motoring industry. More than 35 years ago M. Serpollet pere created no little sensation by the invention of a locomotive routiere of a very primitive type. Subsequently, as a young man, the son indicated the strong mechanical bent of his mind by turning attention to the production of a small steam-engine for purposes of locomotion. This model, while differing to but a small extent from those usually constructed by lads of his age, was yet remarkable, in that it proceeded upon a clearly defined line in which, so far, other inventors had not travelled. This may be described, in brief, as the immediate production of vapour, in a limited space, by contact with a super-heated surface, of the smallest possible amount of water sufficient to bring about a thrust of the piston rod. His aim is to attain a speed of foo miles per hour. Clubs: Automobile 'of France, Nice Automobile, Austrian Automobile, A.C.G.B. & 1. [1]

It is with great regret that we have to announce the death of M. Leon Serpollet. which took place in Paris on Monday last, at the early age of forty-eight years.

Of humble birth, he gradually forced his way to the front until he became probably the leading authority in the world on the subject of steam automobiles. It was about the year 1887 that he first devoted his attention to the question, his initial production being the three-wheel machine of which we give an illustration. In this the boiler was placed at the back of the two hind driving-wheels, the front wheel being the steerer in the usual way. The machine had no movable pedals, but in their place two fixed foot-rests were provided. This little vehicle was found of great utility for carrying a single passenger at a considerable speed, as, for example, in sending messages or delivering small packages. It could attain a pace of twenty miles an hour, its principal feature being the flash generator, which he developed to a high degree of perfection.

Continuing his experiments, M. Serpollet, later, constructed several superheated-steam carriages, which proved remarkably successful, with the result that works were established for their manufacture on a commercial scale.

Coincident with the building of steam motor-cars, he paid considerable attention to the construction of steam tramcars and rail motors, large numbers of which were turned out. Year after year he was a constant exhibitor at the Paris Salon, and when the announcement was made about a year ago of the formation of the Darracq-Serpollet Company to build steam omnibuses, the many friends of the deceased all congratulated him on having at last overcome the great difficulties he had had to contend with.

M. Serpollet, always anxious to keep steam to the front, took part in most of the early races and contests in France, and his marvellous performances at Nice in the spring of 1901 and 1902 — more especially the latter, for it marked the appearance of the Easter Egg — will still be remembered.

The deceased was also a regular visitor to England, and rarely, if ever, missed the annual exhibitions at the Agricultural Hall. We can well remember, in the old days of the Arena, how anxious he was to give a demonstration of the speed of his vehicle, and the difficulty we had in preventing him risking disaster, owing to the fact that, although the track was about 200 ft. long, it had a sharp fall to the south, which rendered fast travelling dangerous. Motorists generally, and not merely those interested in steam, will, we feel sure, join with us in an expression of sincere regret that he should be called away just at the time when he was achieving the success for which he had so long striven.

A contributor writes:— "When I last saw the lamented M. Leon Serpollet, outside the Hotel de Luxembourg, at Nice, about a month ago, seated in his car with his wife and two children, I little thought that it would be the last time I should look upon my friend alive. He was in much better health, he stated, than he had been for some time past, and was looking forward to spending a holiday at his villa on the Riviera. As one who has known the deceased for something like twelve years, his sudden demise has come with a severe shock, and it seems there are others who could have been better spared than our friend, who in the meridian of his life has been suddenly called away. His was a voice that was sweet. His was a mind that was clear. His was a hand that was cunning and clever, and his name and his works will live as being one of the pioneers of the greatest movement in the modern history of the world. R.I.P."