Grace's Guide is the leading source of historical information on industry and manufacturing in Britain. This web publication contains 143,000 pages of information and 229,221 images on early companies, their products and the people who designed and built them. 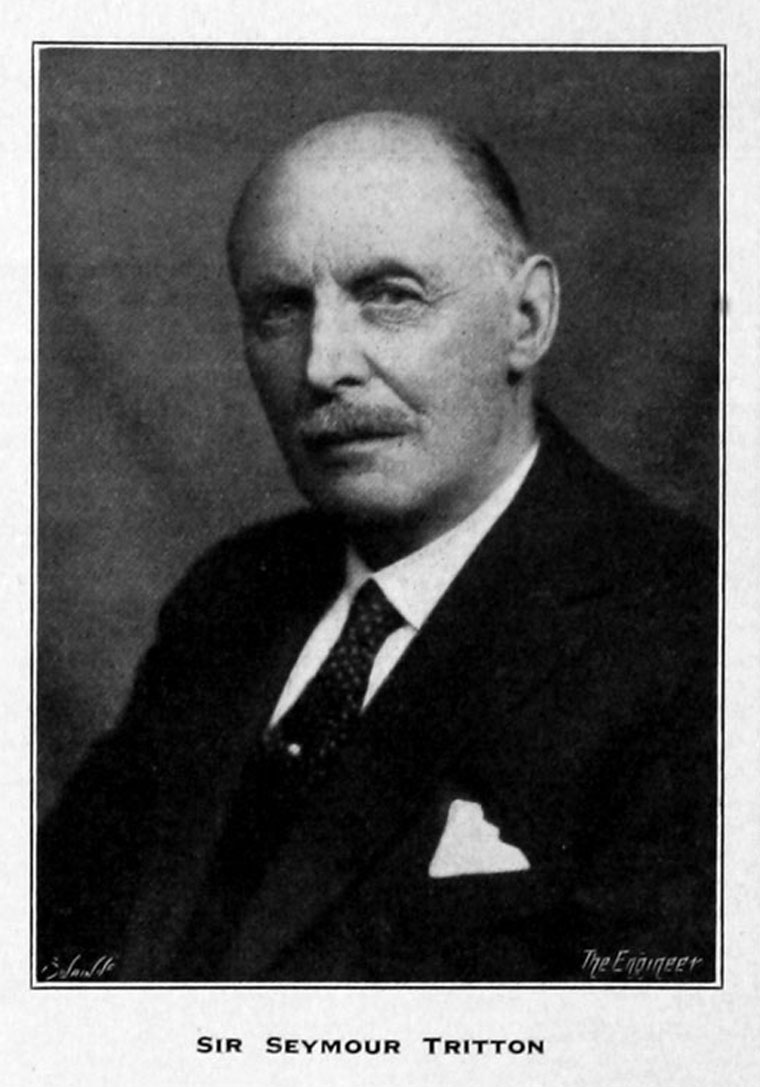 Sir SEYMOUR BISCOE TRITTON, K.B.E., was senior partner of Messrs. Rendel, Palmer and Tritton, consulting engineers, of Westminster, until within a few months of his death. His two most important works in railway engineering were in connection with the standardization of locomotive and wagon types for the Government of India, and the design and inspection of locomotives and rolling stock for the Ministry of Munitions during the War.

Sir Seymour was born in 1860 and was educated at Haileybury College. He became a premium pupil in the workshops of Messrs. R. and W. Hawthorn, of Newcastle upon Tyne, and after completing his training he spent six months at sea as a marine engineer. In 1885 he was appointed assistant locomotive superintendent of the Bengal and North Western Railway, and was placed in charge of the new workshops, and of the erection of the company's first flotilla on the banks of the Ganges.

Subsequently he joined the Indian Government service and was sent as works manager to Kanchrapara, where the Indian State Railways had taken over the works of the former Eastern Bengal Railway. He reorganized the central workshops, where 10,000 men were employed, and was later promoted to be district locomotive superintendent of the Northern Bengal State Railway, with responsibility for the workshops, running department, and flotilla services.

Returning to England, he was invited to become chief of staff of Sir Alexander Rendel; later he was made a partner of the firm, with Sir Frederick Palmer, and the name of the business was changed in 1913 to Rendel, Palmer and Tritton, consulting engineers. During the War the firm were appointed consultants to the War Office and Ministry of Munitions for railway work. They were responsible for the design and inspection of rolling stock and materials for the railways behind all fronts, including some 9,000 miles of track and 3,400 locomotives and 72,000 wagons.

Sir Seymour was created K.B.E. in 1918 in recognition of his services in connection with this work. He revisited India in 1924, at the invitation of the Indian Government, to examine the question of standardizing Indian locomotive designs. Sir Seymour had studied the matter for many years and as early as 1902 was appointed a member of the committee on locomotives of the British Engineering Standards Association, and of the conference on standard locomotives for Indian railways.

In addition to his work in India in 1924, Sir Seymour also visited Burma and Assam, and reported on various railway companies there. lie was particularly interested in matters relating to standardization in engineering work, and also in engineering inspection. In addition, he was a strong advocate for the establishment of a British locomotive testing station. In March 1937 he retired from active work with his firm, but retained a connection with it in a consultative capacity. His death occurred in Westminster on 21st November 1937.