Grace's Guide is the leading source of historical information on industry and manufacturing in Britain. This web publication contains 148,359 pages of information and 233,846 images on early companies, their products and the people who designed and built them. 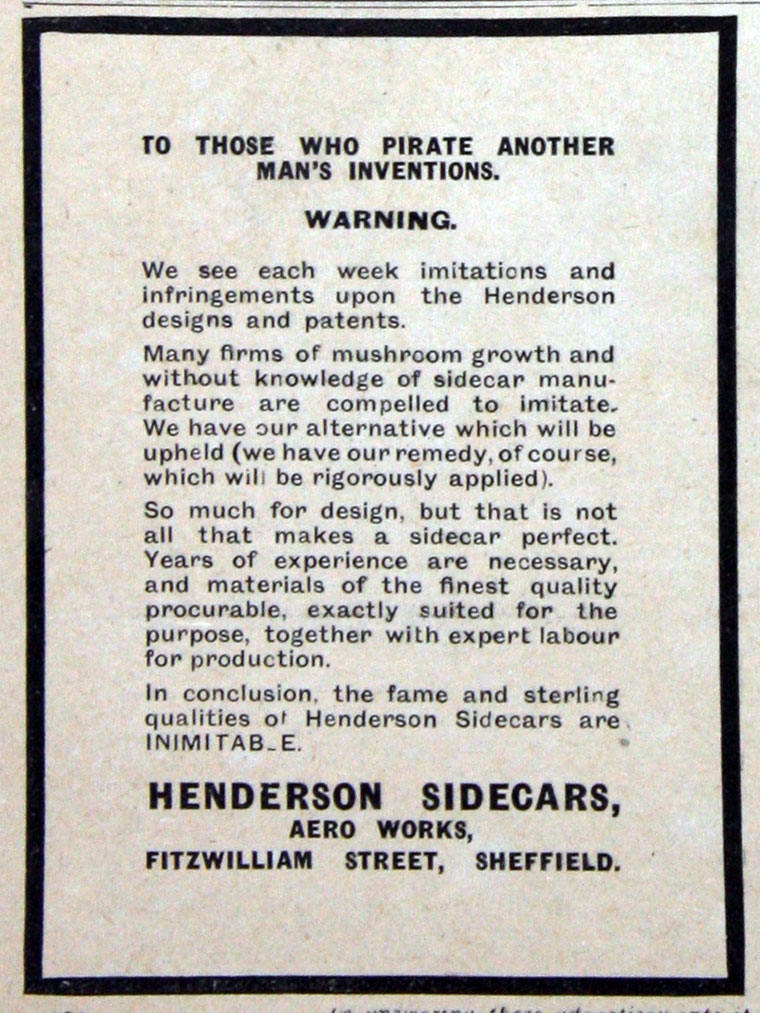 Sheffield-Henderson were motorcycles produced in Fitzwilliam Street, Sheffield from 1920 to 1923.

Henderson sidecars were made by the Aero works of Fitzwilliam Street.

November 1919. The company announced the Sheffield Henderson Motorcycle, designed by Leonard B. Henderson, who was an aeronautical engineer.

1920 Having previously been well-known for the production of sidecars, the company moved into motorcycle manufacture with a 3hp two-stroke model with their own engine and two-speed chain-cum-belt transmission. It introduced their own design of front fork, with C-spring linking the double tubed girder to the frame head. By late in the year, a 499cc sv Blackburne model had been added, with a three-speed Sturmey-Archer gearbox and all-chain drive and vacuum-operated oiling system for the engine. It was ideally suited to sidecar usage. In a relatively short time the make gained a fantastic reputation in speed events. The machine could be had with a side valve or overhead valve Blackburne engine or a Bradshaw engine. The machine had a three-speed Burman gearbox.

1921 A new model was tried, fitted with the 348cc ohv Blackburne engine.

1922 That new model was catalogued and sold with a guarantee of 70mph/112kmh. There was also a sporting sidecar outfit with a tuned 545cc sv Blackburne engine and streamlined sidecar. In June, the factory even claimed several world records in the 250cc class. Sheffield Henderson must have been one of the very few makes that placed the toolbox under the top tube behind the steering head, a position that obviated a rather unusual tank shape, an early form of saddle tank.

1923 The marque did not survive beyond the end of the year.