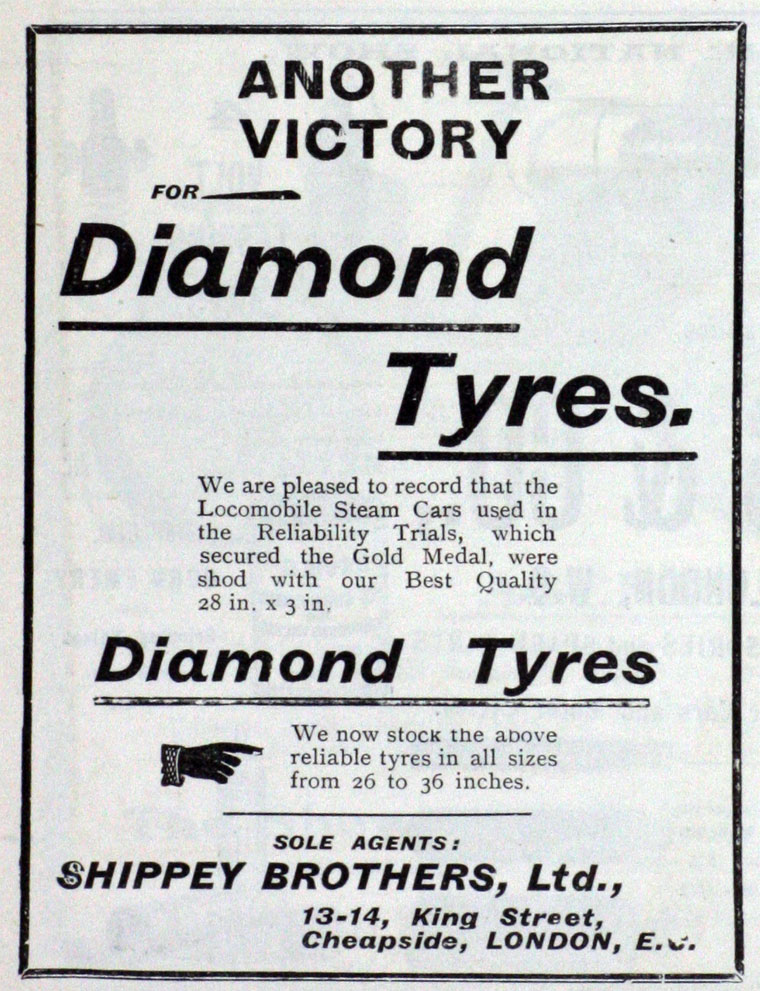 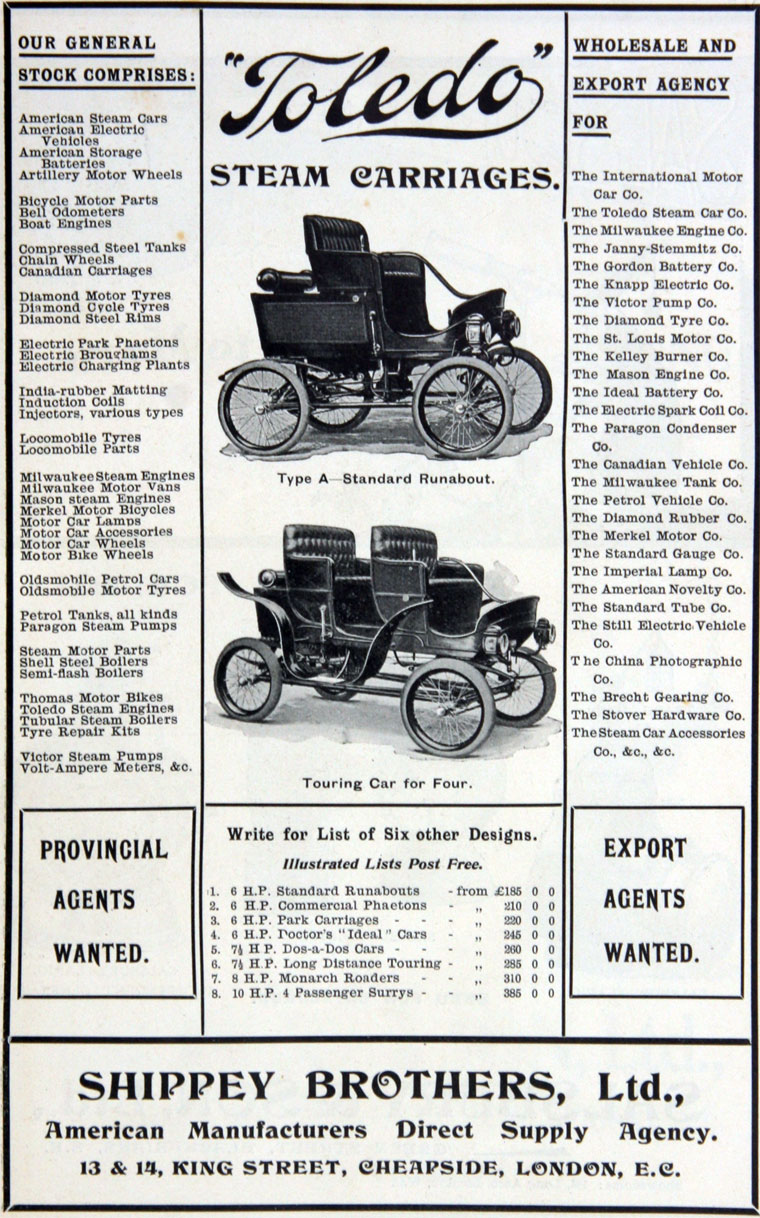 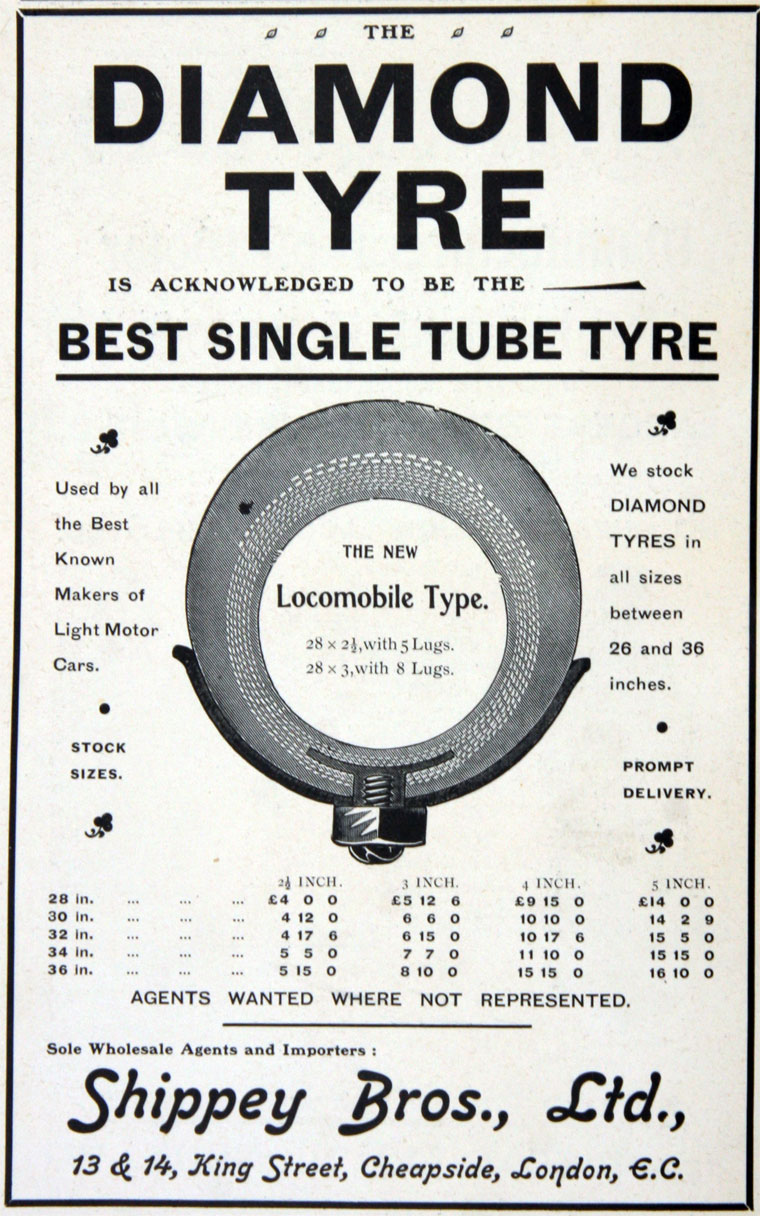 1885 Founded by Arthur Shippey to develop his inventions.

1898 The firm went into the motor business

1899 Published details of six Riker carriages and cars that are being constructed in London.[1]

By 1904 the firm owned and controlled the Toledo and other systems. Planned to introduce several moderate-priced popular American petrol cars, specially suited for doctor's work, and men of moderate means. [2]

1904 August. Winding Up order. 'Under the wining-up order made against Messrs. Shippey Brothers, Limited, the statutory meetings of the creditors and contributories were held yesterday before Mr. H. Brougham, Official Receiver, the offices of the Board of Trade. The company was registered in 1887 with a capital of £30,000 as electrical engineers, and to take over certain patent rights of Mr. Arthur Shippey. In 1901 it arranged to finance the Motor Traction Company, of Kennington, in consideration of receiving portion the profits. Mr. Arthur Shippey was appointed managing director of the company at a salary of £300 a year, increased to £500 for the third year, with an additional commission of 23 per cent. on the net profits after 10 per cent, had been paid to the shareholders. The last meeting of the board was in 1892, since which date Mr. Shippey had apparently taken control of the whole of the company's affairs. The purchase price paid to Mr. Shippey for his business was £8,000, discharged by £100 in cash and the balance in shares. The number of shares issued represented £12,000, and £5,000 was expended in purchasing patents. The company had traded at a loss throughout. The liabilities were £3,238 with assets £1,838. In reply to a creditor Mr. Shippey stated that, though the company had been selling Ford motor-cars as agents, the agency agreement had not yet been signed. Resolutions were passed appointing Mr. Percy Mason as liquidator, with a committee of inspection.'[3]