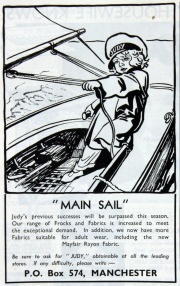 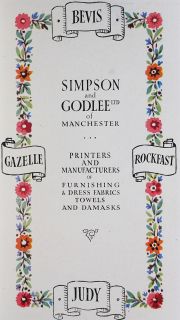 1881 Francis Godlee went to Manchester as a young man, to join his relative William Simpson in business at Dean's Mill, Swinton, and the two Quaker partners (they were related through marriage) soon established a reputation for probity and good management.

The Manchester cotton trade was then thriving, and the firm of Simpson and Godlee, cotton manufacturers and calico printers, steadily expanded.

Its offices and warehouses moved to the centre of Manchester, and further mills were acquired at Bolton and at Bury.

1900 By the turn of the century, there was a workforce of some 1500 people. The firm's prosperity owed much to Francis Godlee, not only to his good business sense, but also to the sympathetic consideration he showed for his employees.

1900 Partnership change. '... the undersigned William Simpson, Francis Godlee, Frederick Simpson, Timothy Woodhead, and Frederick Terras, carrying on business under the styles of Simpson and Godlee, and Boden Terras and Co. at Nos. 8 and 12 Minshull-street, Manchester, and Deans Mill, Swinton, near Manchester, and in London and elsewhere, has been dissolved as on and from the 13th day of September, 1899. All debts due to and owing by the said.late partnership will be received or paid at the offices of Simpson and Godlee Limited, 8 Minshull-street, Manchester, who have acquired and will continue to carry on the said businesses...'[2]

1914 Francis Godlee became chairman of the firm on the death of William Simpson, and continued to run the business through the difficult war years and after the war until a few years before he died.

1924 He retired when he was able to hand over the business to his nephew Philip.

1962 Company acquired by Alliance Brothers for a cash offer worth 11 shillings a share.[5]. Simpson and Godlee continued to trade under the control of Davoud Alliance (later known as David Alliance).