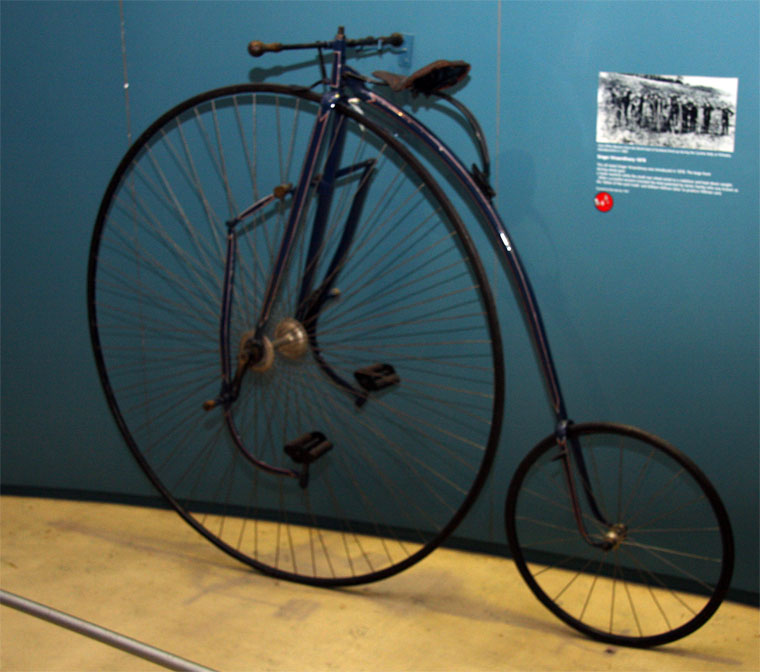 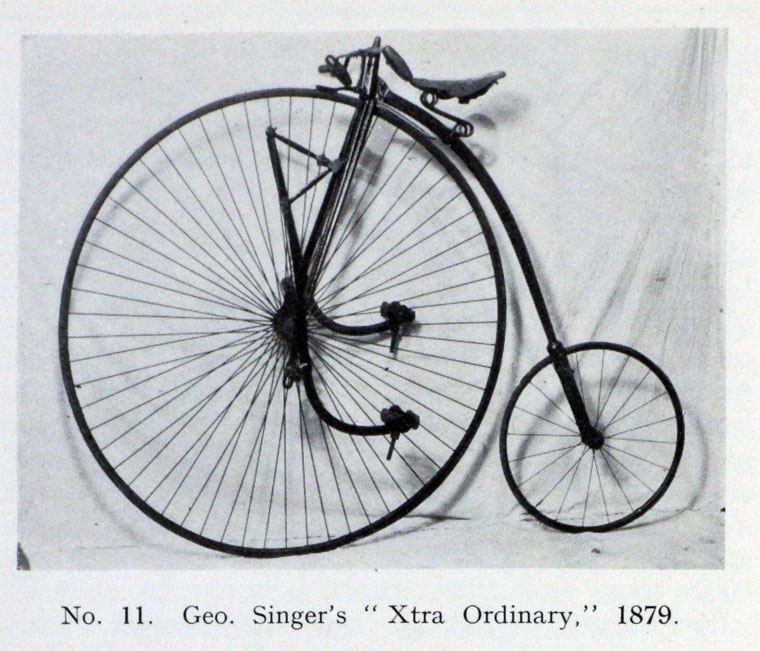 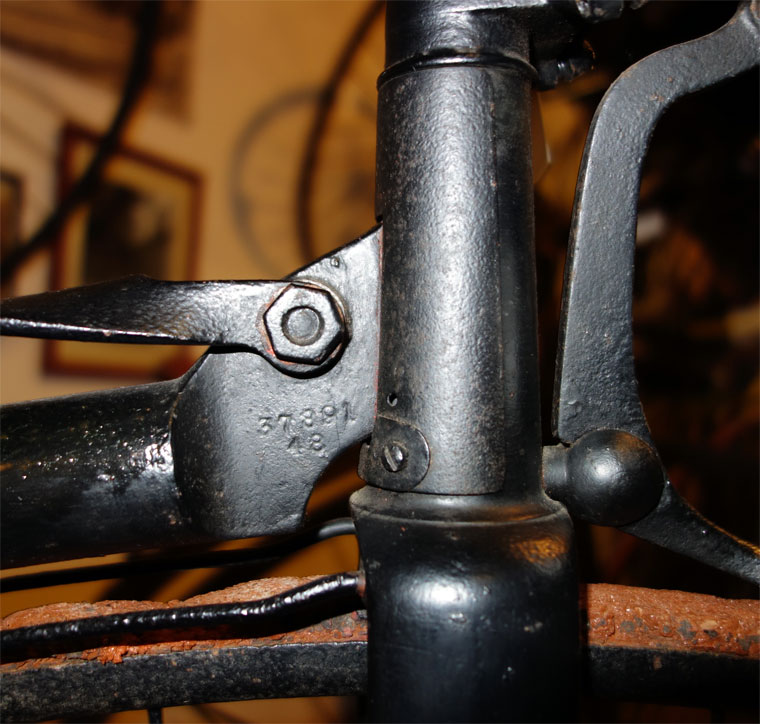 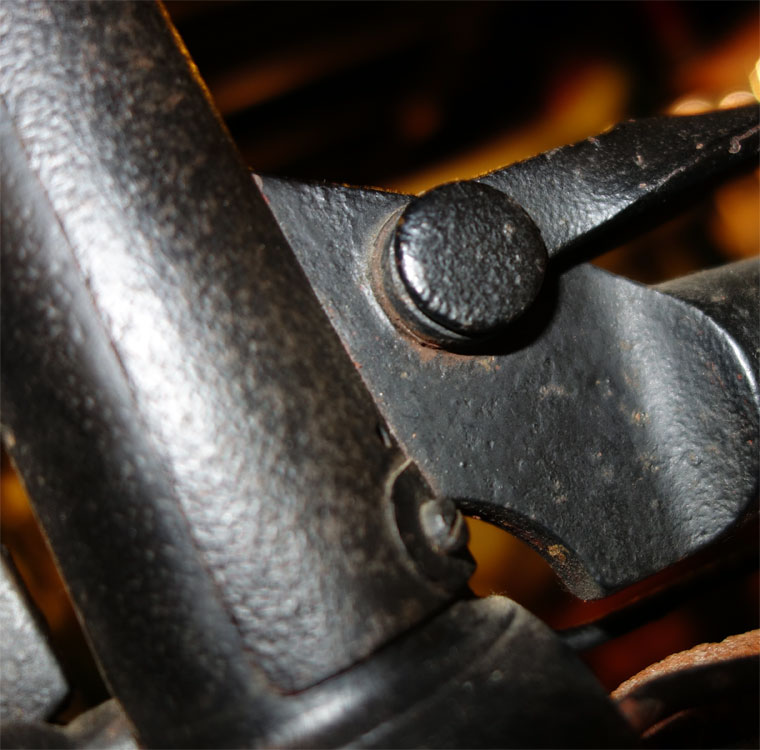 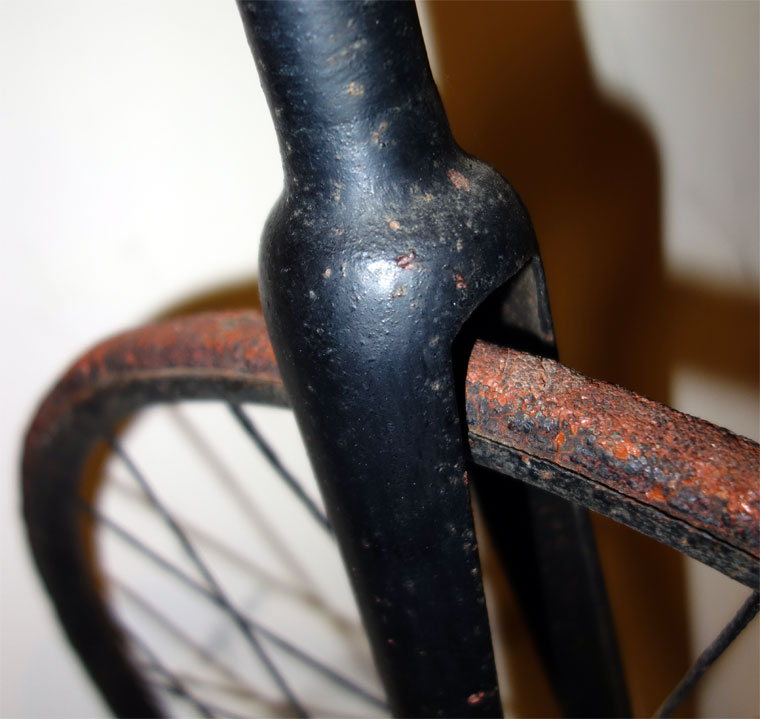 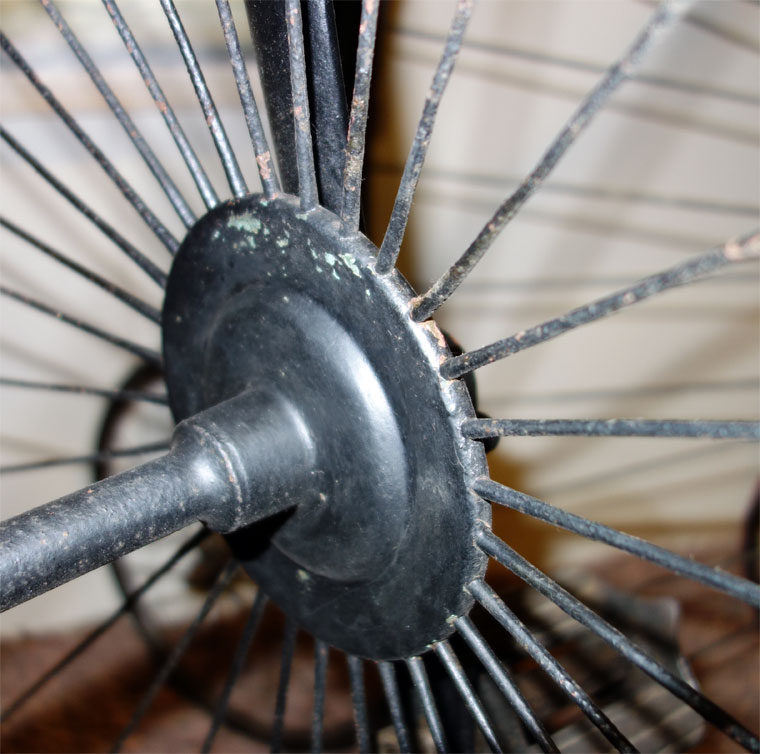 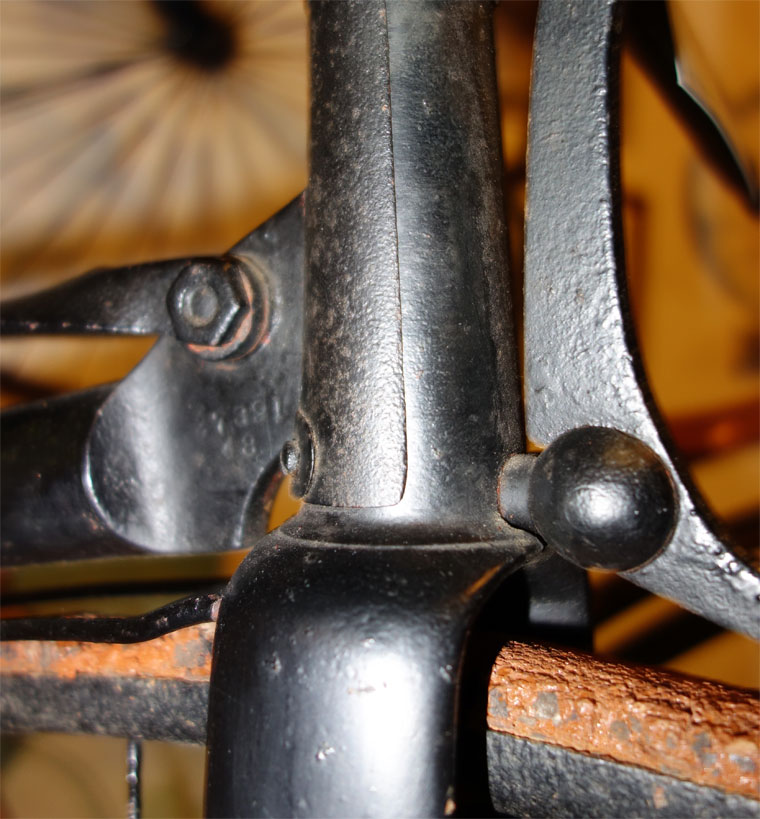 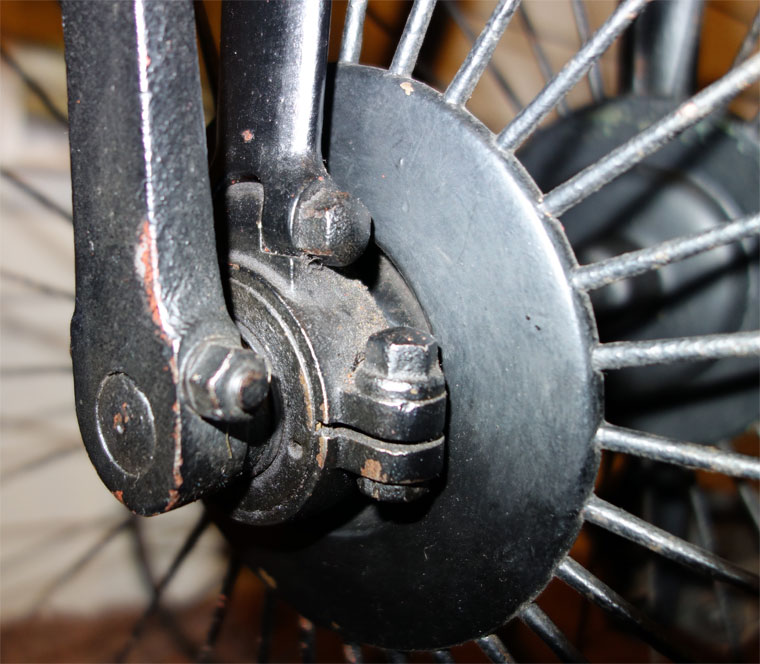 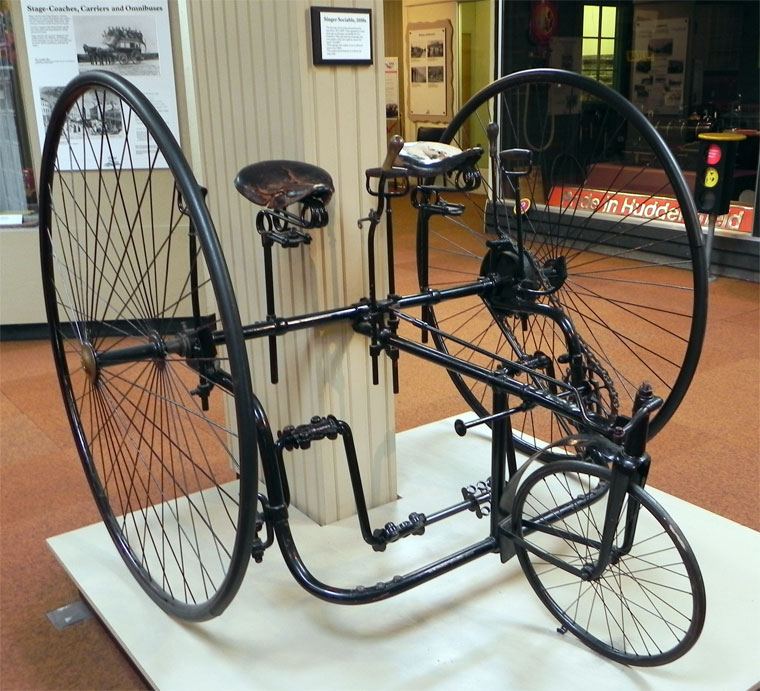 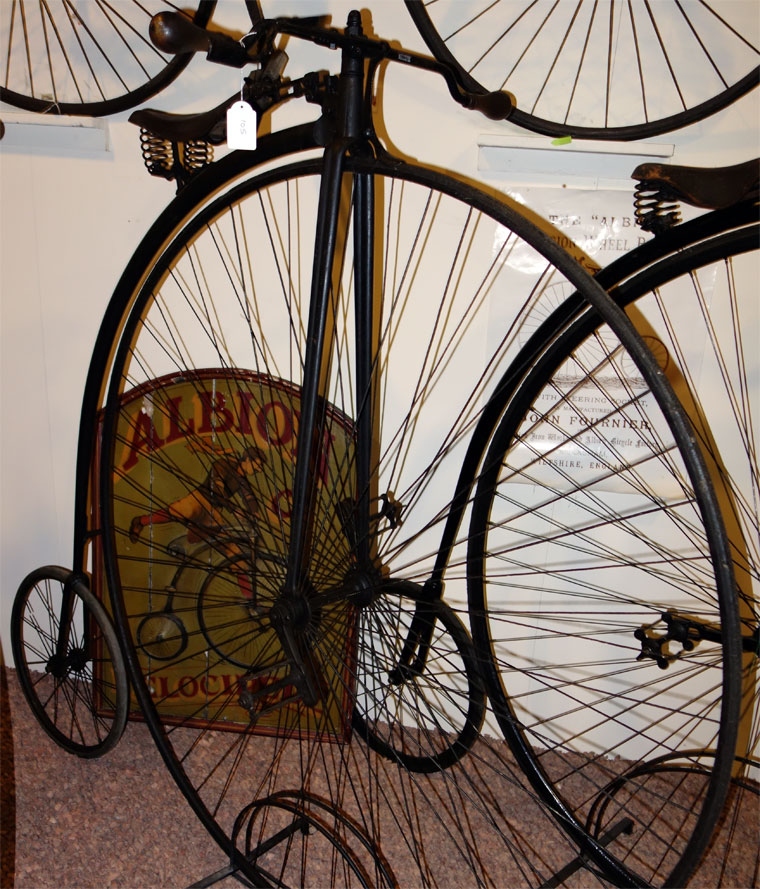 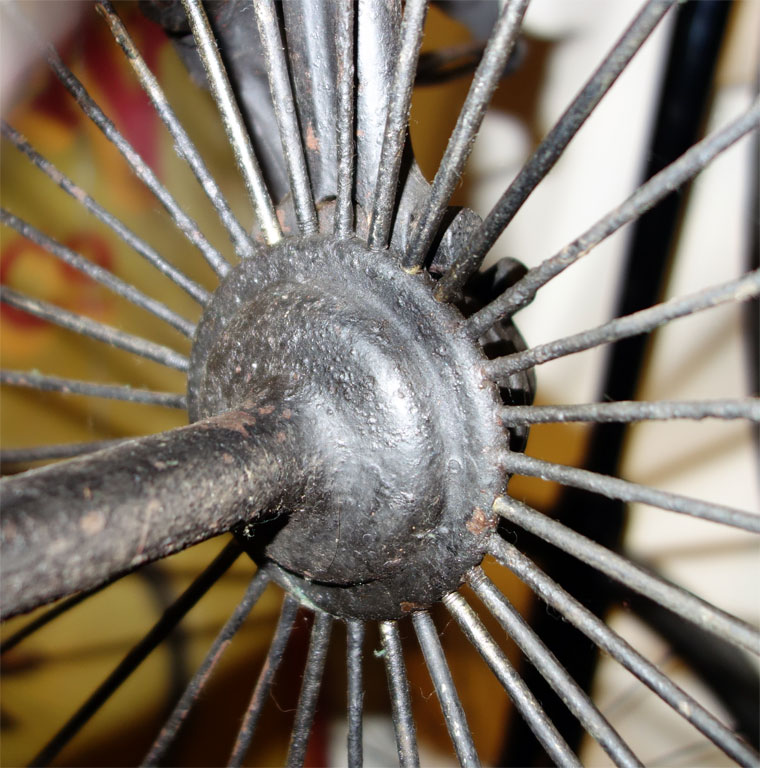 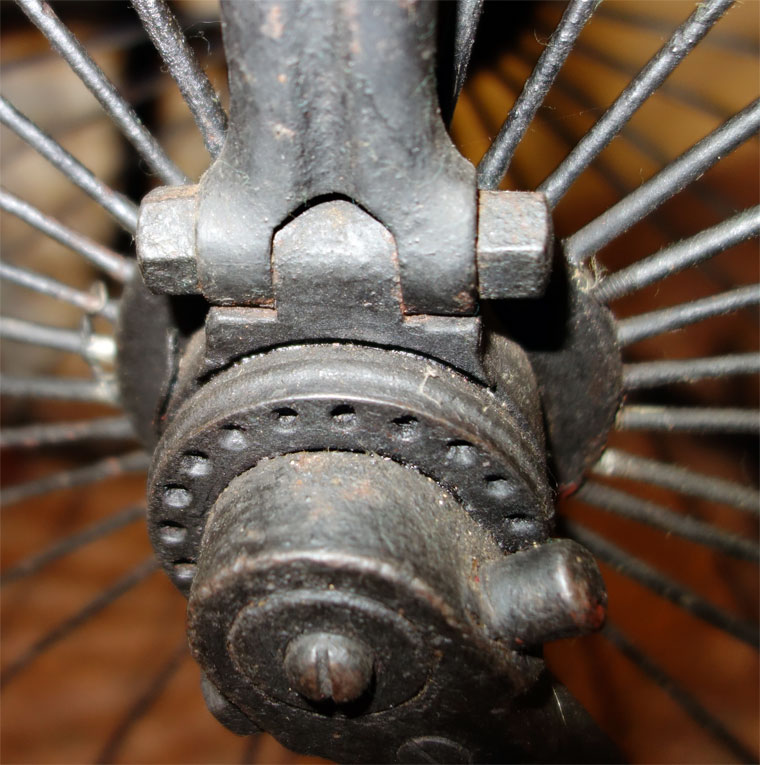 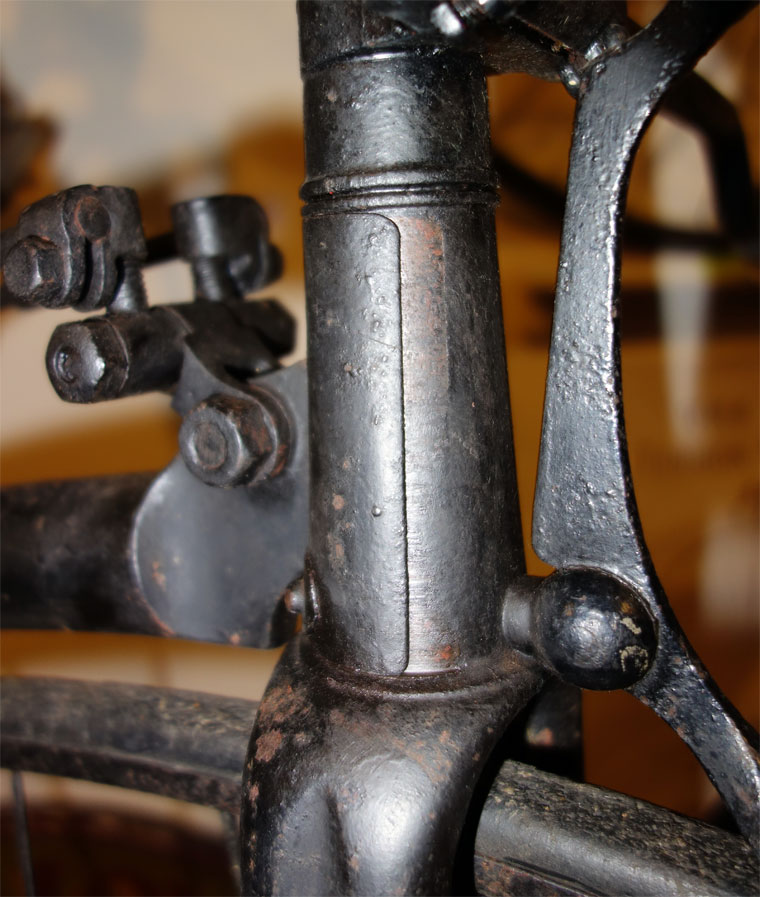 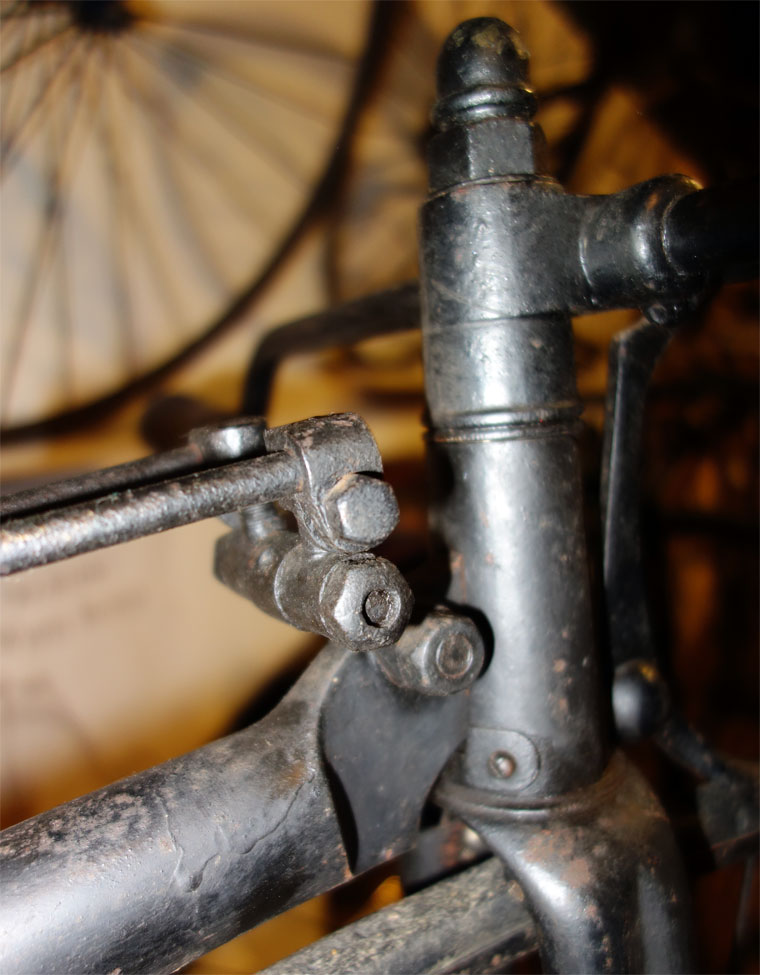 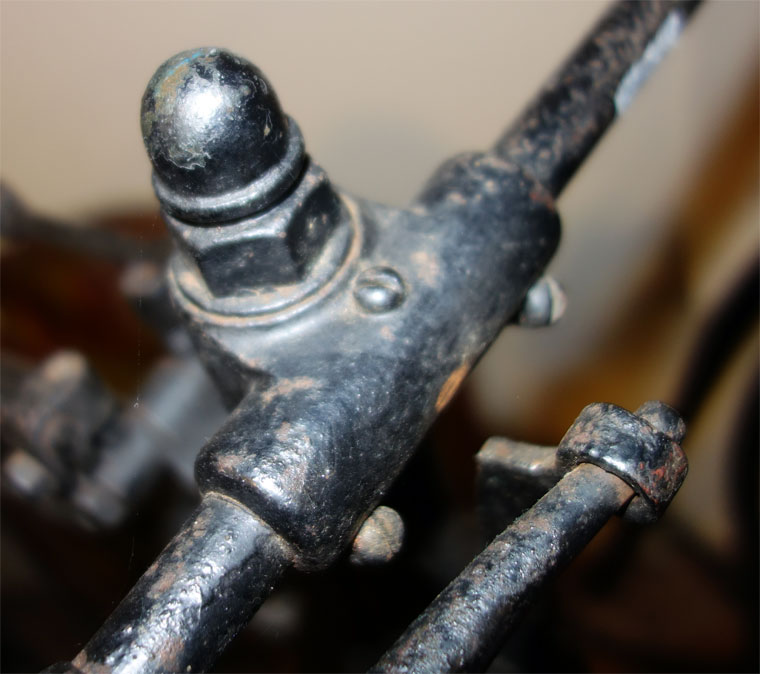 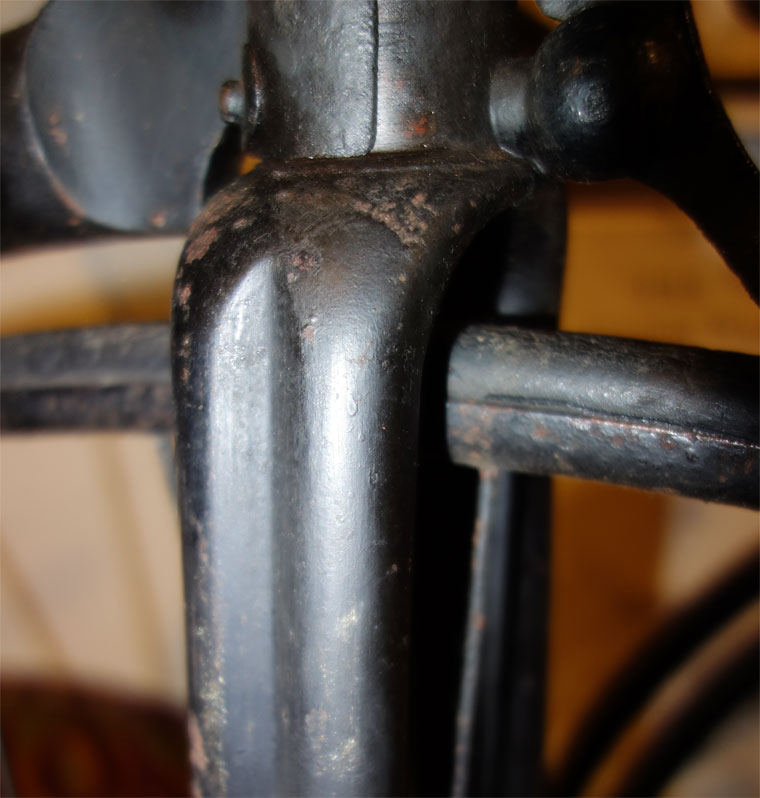 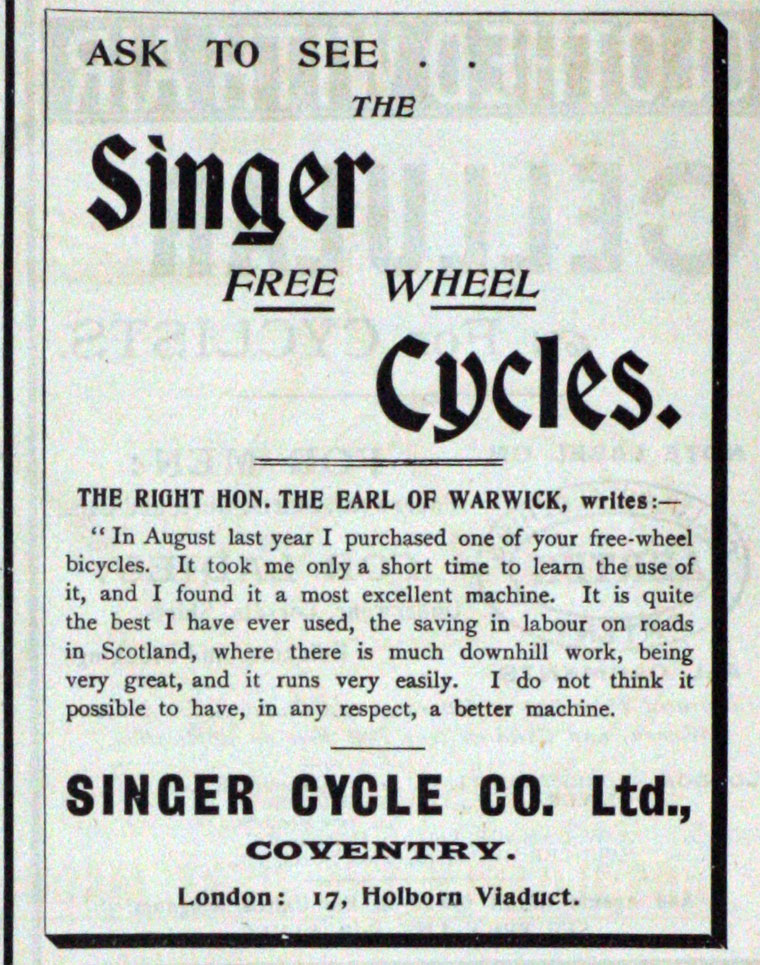 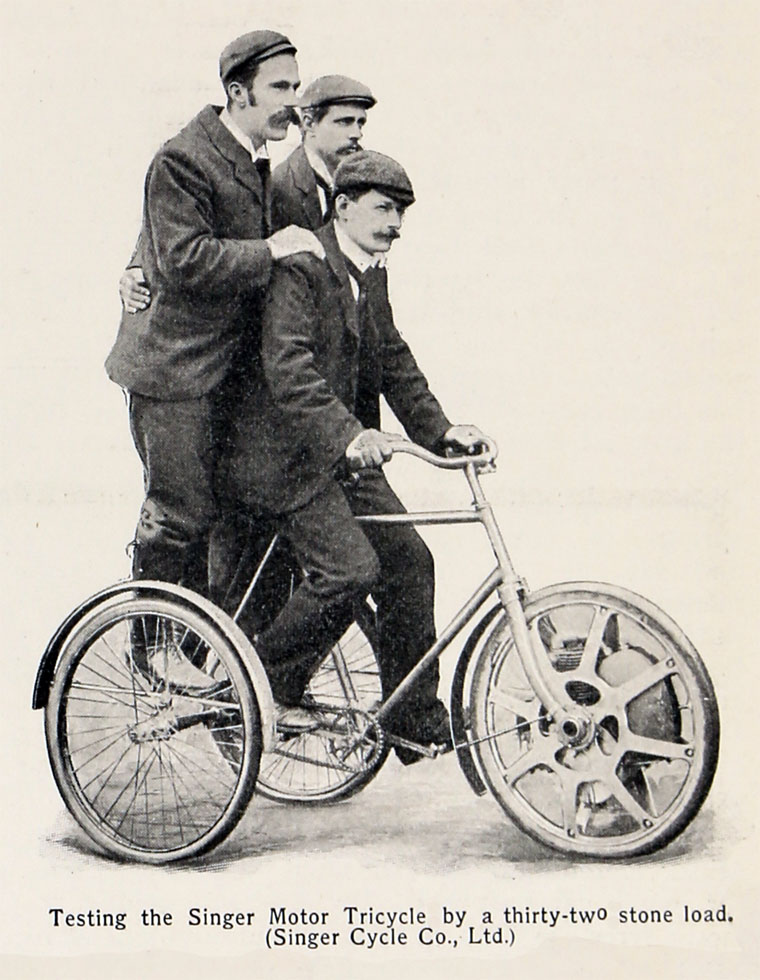 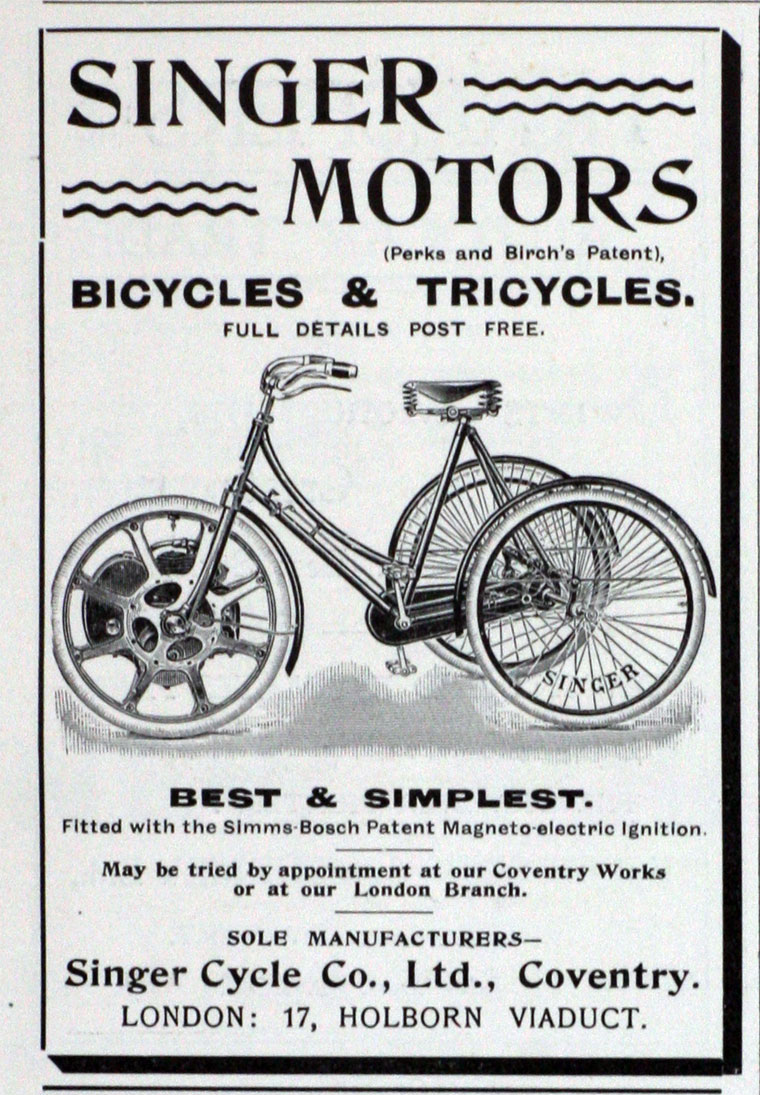 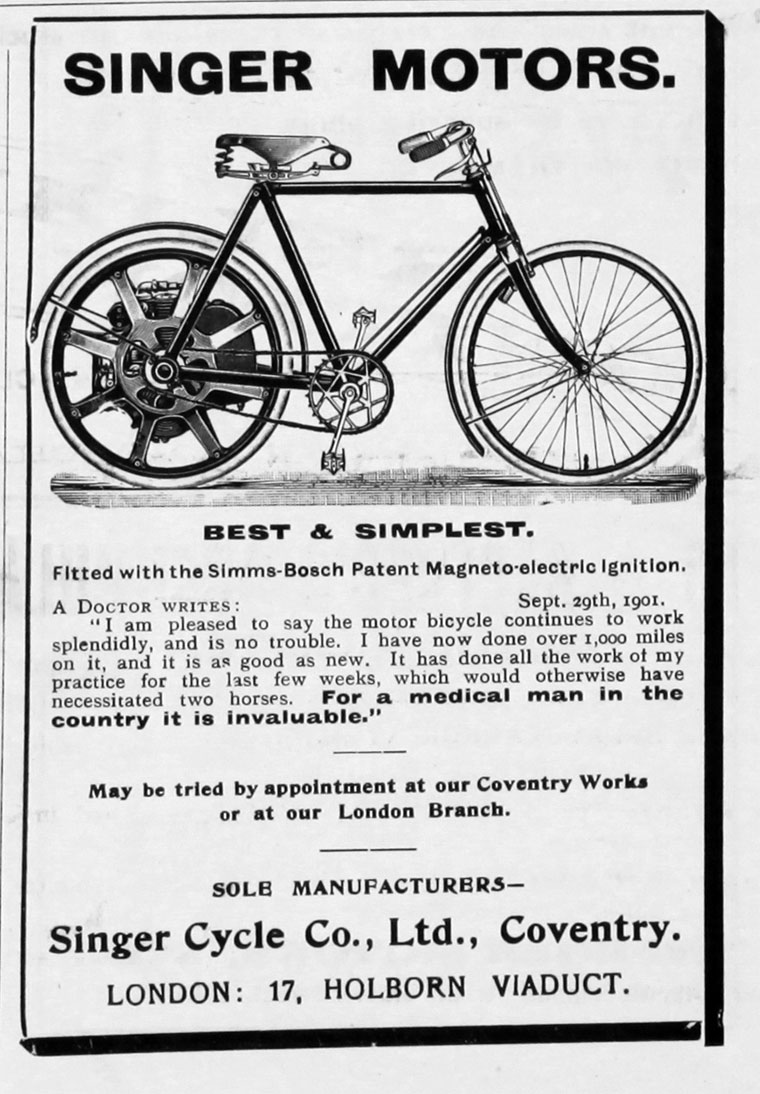 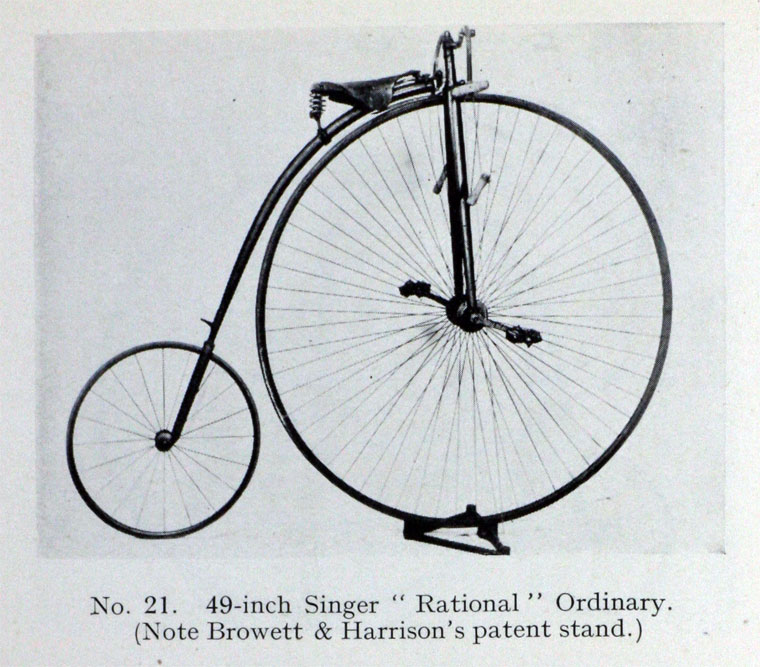 Note: This is a sub-section of Singer

1888 February. Stanley Exhibition of Cycles in Westminster. Showed a tandem. [1]

It is worth noticing that in this patent Singer protected the idea of raking the forks backwards so that the steering centres, continued, would strike the ground at the point of contact of the front wheel, a principle which has been generally adopted on dwarf bicycles.

The 'Xtra Ordinary' was designed for safety, rather than speed; but to demonstrate its capabilities in the latter direction, G. Wailer, the professional cyclist, rode 10 miles on the road in 35 minutes 47 seconds, in October, 1879.

In 1880 an 'Xtra Ordinary' with one lever higher than the other was built for George Singer's brother Robert, who had a short leg, which made it difficult for him to ride the "Ordinary" bicycle.

The rubber-studded pedals should be noted: these may have been the inspiration for the Lea-Francis 'Leaf' pedal of 20 years later. Lea was connected with the Singer Co. for many years.

This exhibit was shown at the North East Coast Exhibition, Newcastle, 1929, and was presented to the Bartleet Collection by Mr. J. R. Chalmers, the well-known old time rider of Barras Bridge, Newcastle. [2]

No. 21. 49 inch 'Rational' ordinary, made by Singer and Co. Ltd., Coventry, about 1890. The 'Rational' was the result of attempts to make the old high 'ordinary' bicycle safe, and to render 'headers' (as tumbles over the handlebar were called) impossible or at least unlikely! This was achieved by raking the front forks backwards, and fitting a larger and heavier back wheel; as a result the machine was certainly less dangerous to ride, but its speed was greatly reduced, and the 'Rational' was never used for racing. It will be noted that the racing 'ordinaries' in the collection have almost vertical front forks and small—light-back wheels. However, the new type enjoyed a considerable vogue among road riders, during the last few years before the 'ordinary' was superseded by the all-conquering 'safety,' as the rear driven geared-up bicycle was called.

The 'Rational' was evolved (or more correctly revived, as the earlier types were similar in design, vide James Starley's 'Ariel' of 1871), by J. H. Dearlove, a well-known North London cycle maker, and copied by Ellis and Co, who made the 'Farringdon,' J. R. Trigwell of Brixton, whose 'Regent' was extremely popular, and many other manufacturers: in the years 1890-1893 nearly every cycle maker included a 'Rational Ordinary' in his range of models.

Features to note in this exhibit are the detachable handlebar, a luxury seldom found on the high bicycle; the adjustable ball head, and the slotted rear fork-ends: the last item is frequently claimed as a modern improvement. Purchased in Norwood. Weight 45 lbs.

The Singer 'Rational' is displayed on a stand made and patented by Thomas Browett and William Harrison, of Manchester, patent No. 3700, 1876. This consists of a triangular base of cast iron, in which grooves are sunk to take the front wheel; from this base cords run to the ends of the handlebar, where they are tensioned and secured by wooden adjusters, similar to those used on tent ropes.

Many of these stands were used by amateur riders in the days of the 'ordinary'; they were also used to display machines in shops and show-rooms. [3]

Bicycles continued to be produced under the Singer, Premier and Sparkbrook names until 1927. [4]