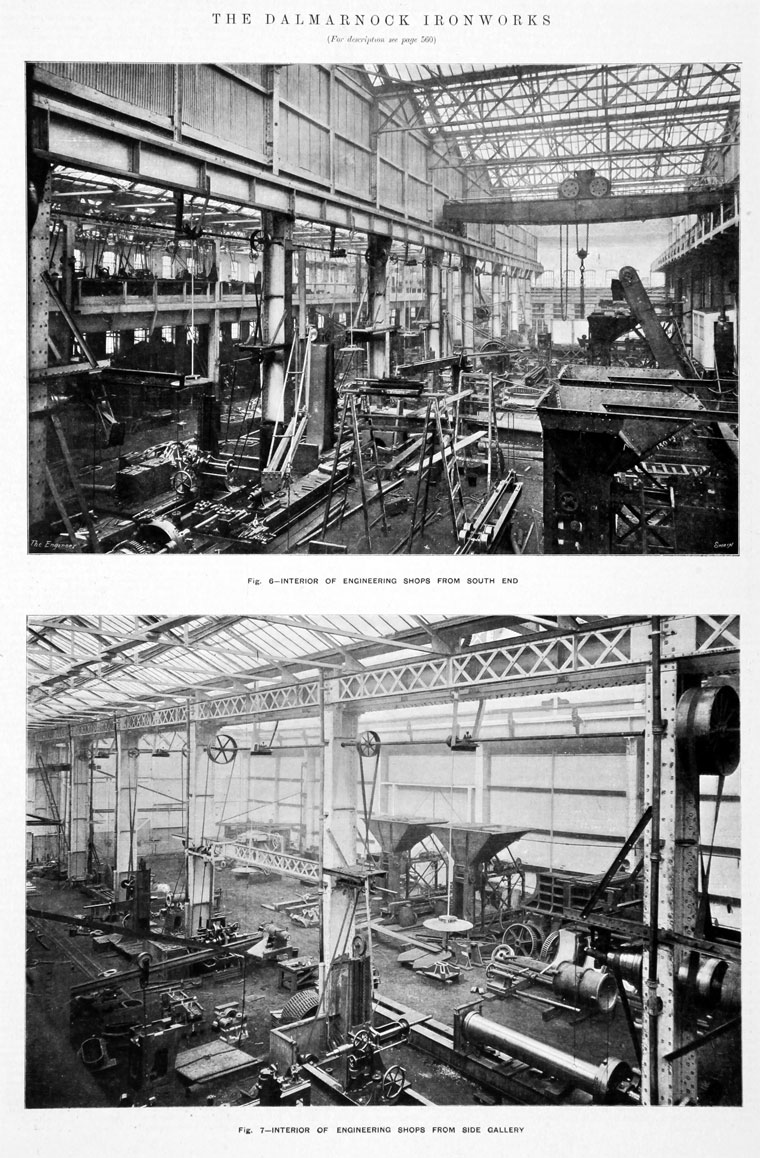 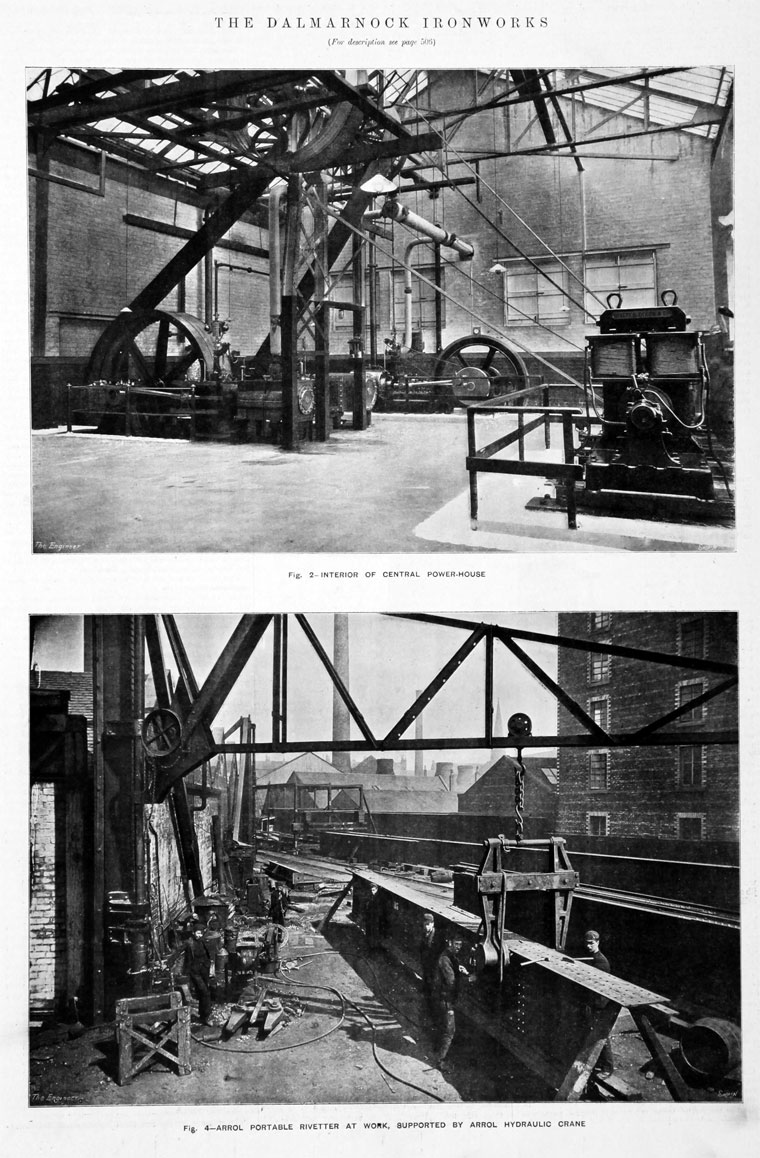 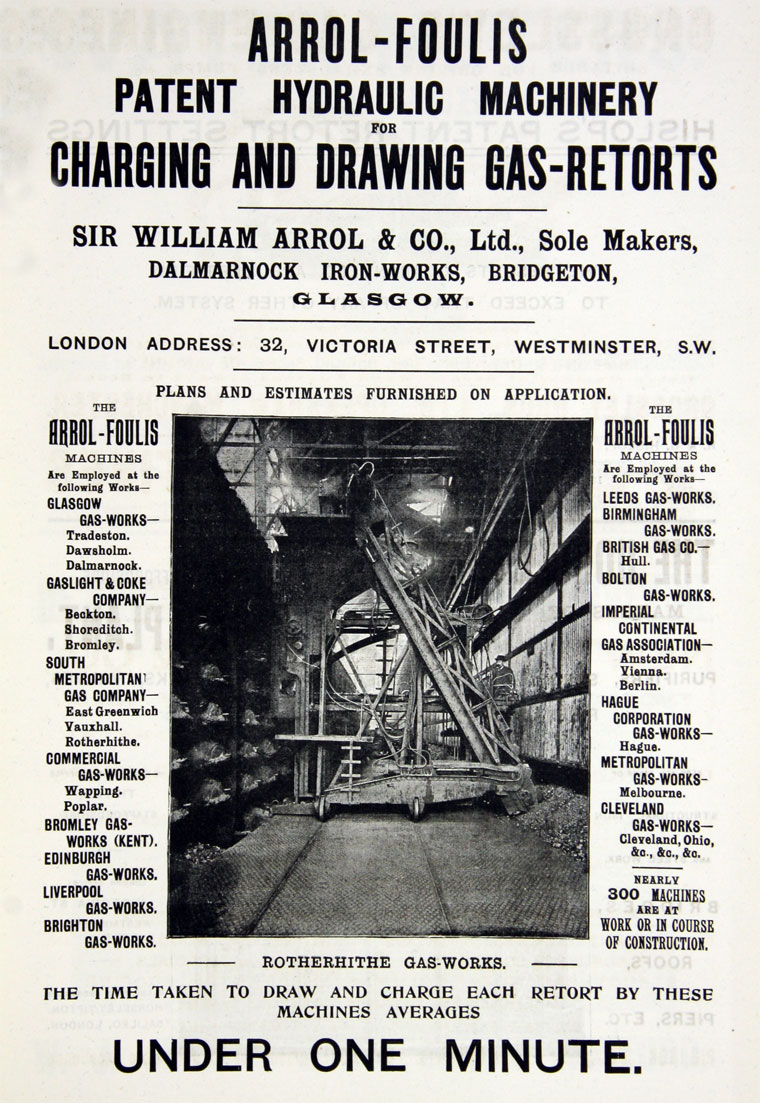 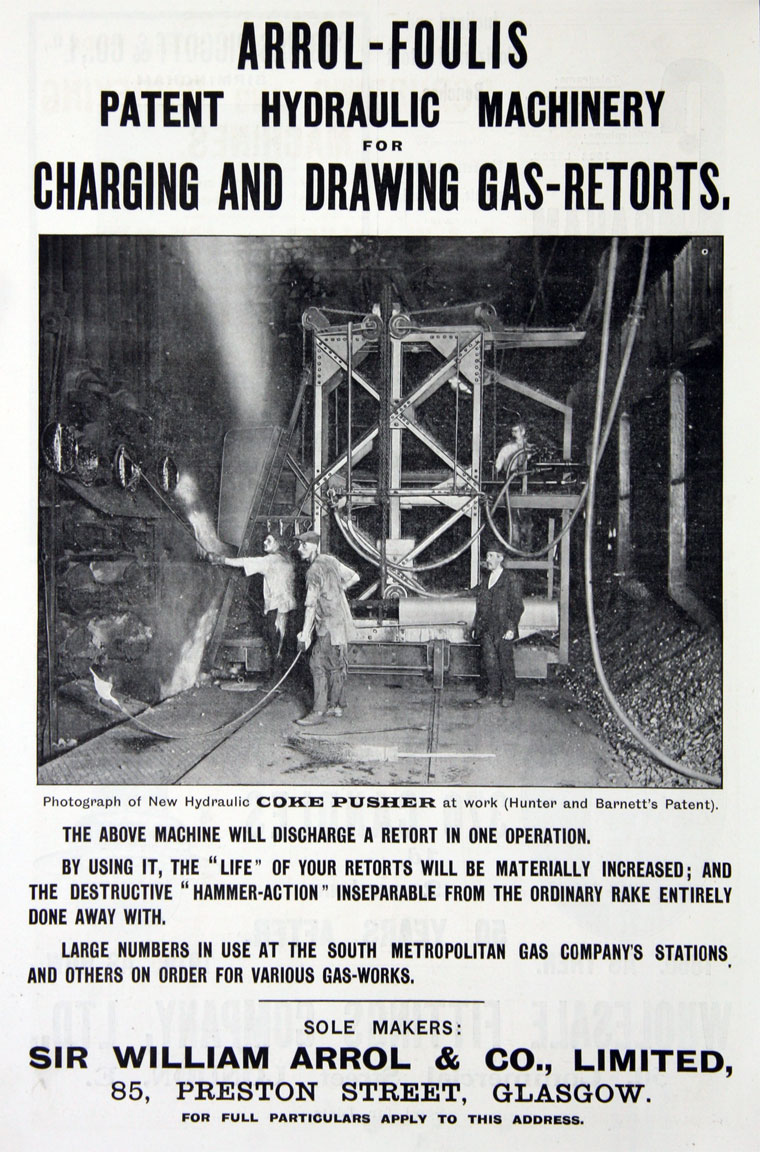 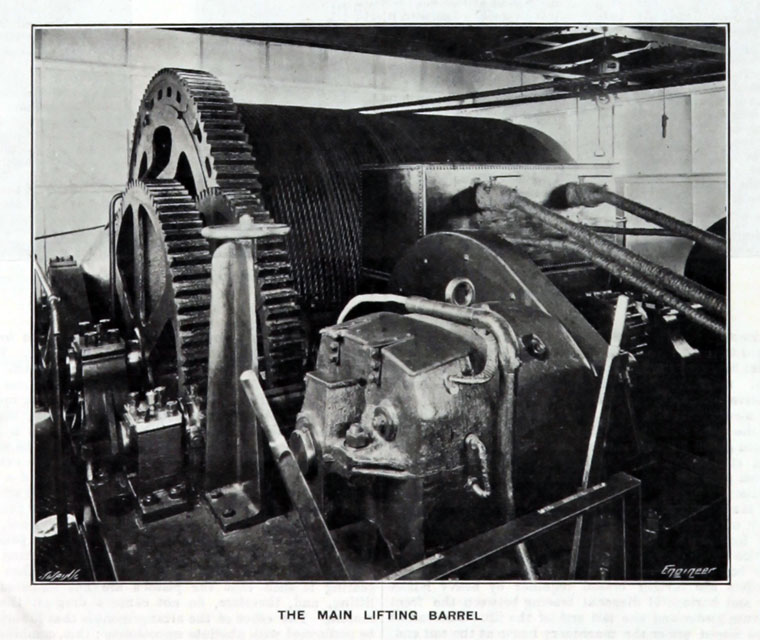 1909. New bridge completed over the Wear. 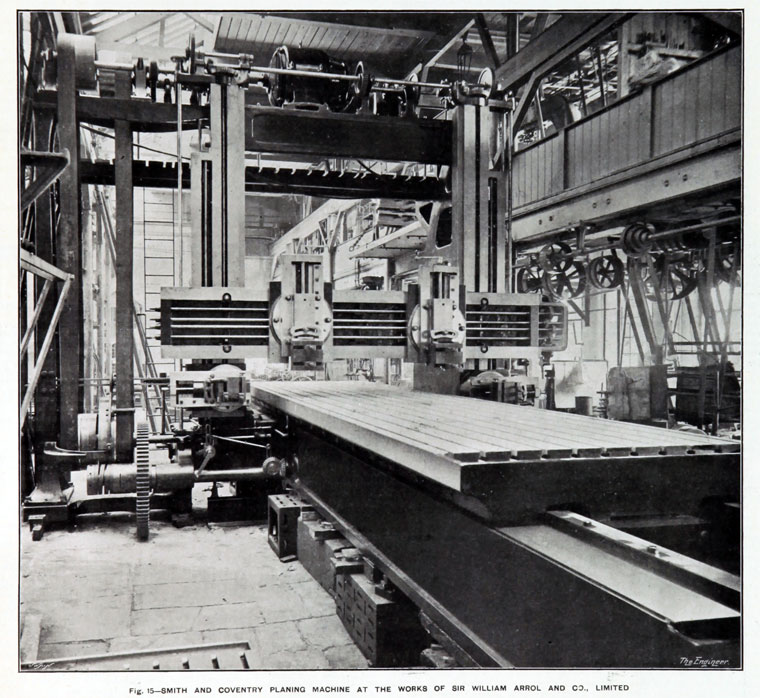 1909. Smith and Coventry planing machine at the works of William Arrol and Co. 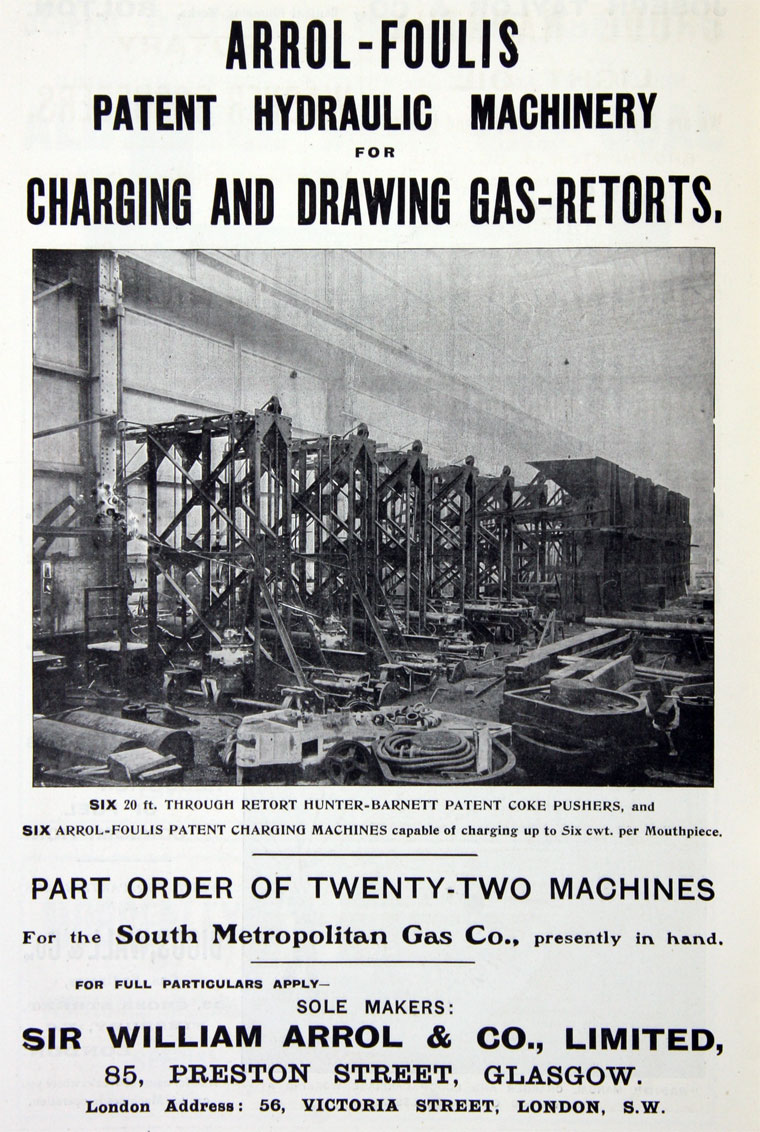 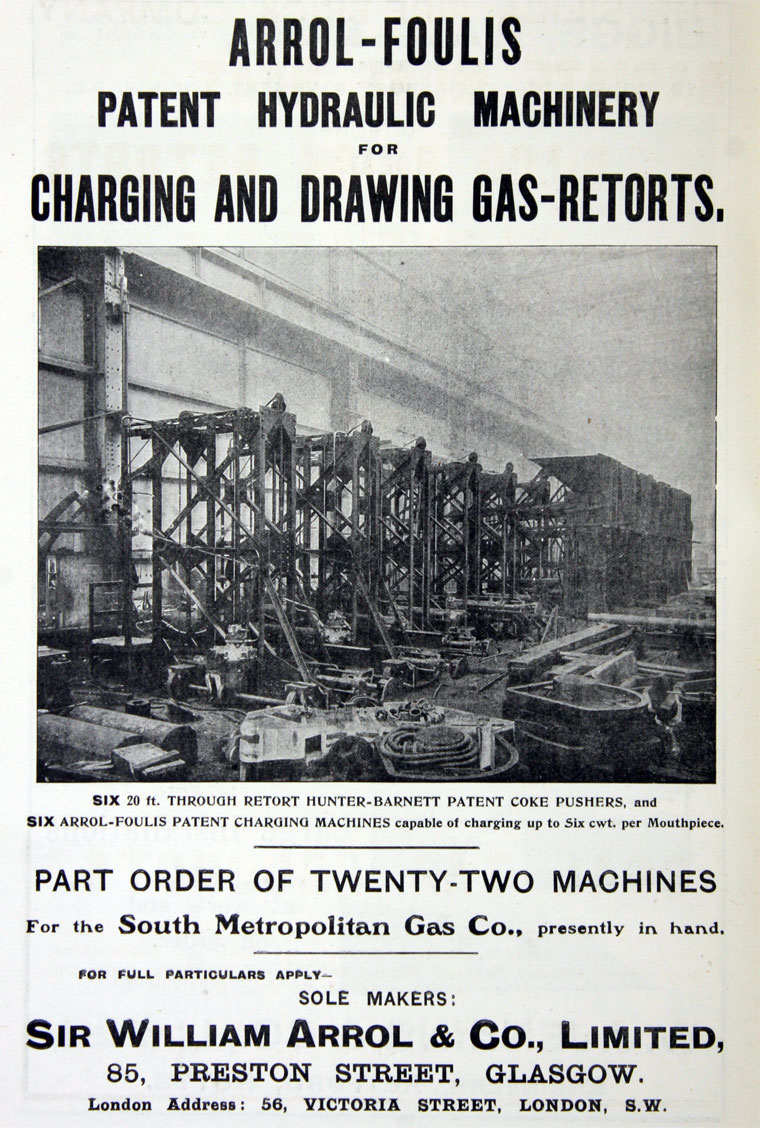 Prior to 1914. 35 ton steam travelling rail crane for War Office. 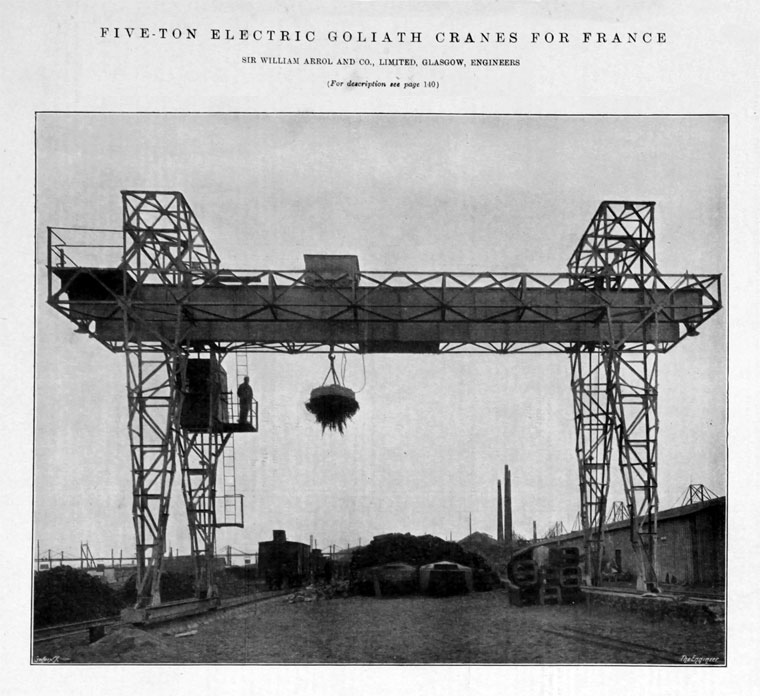 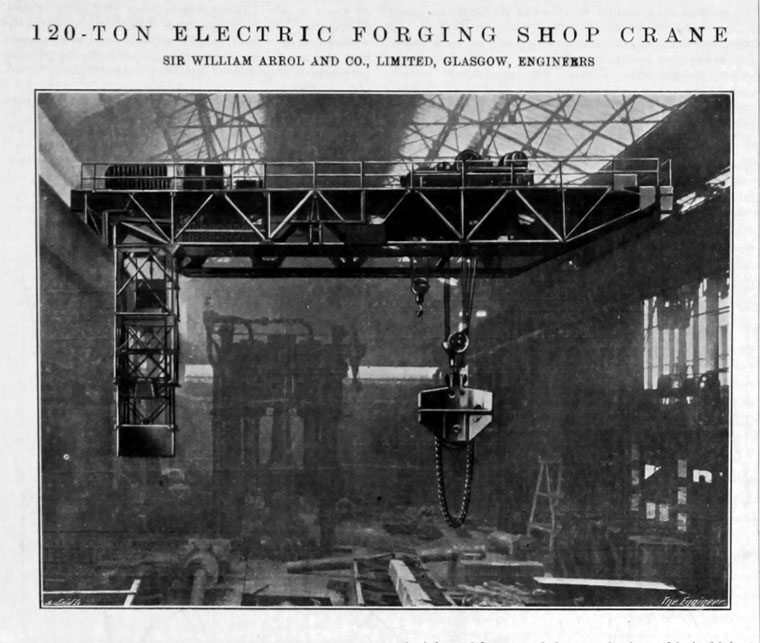 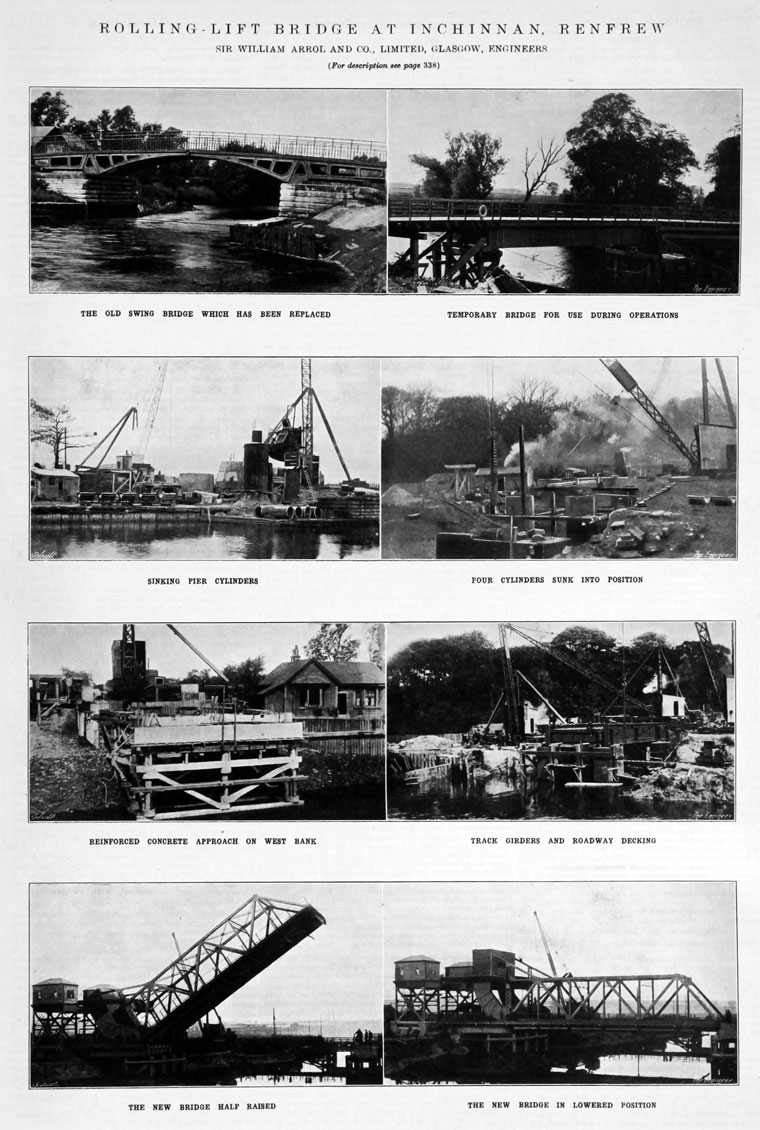 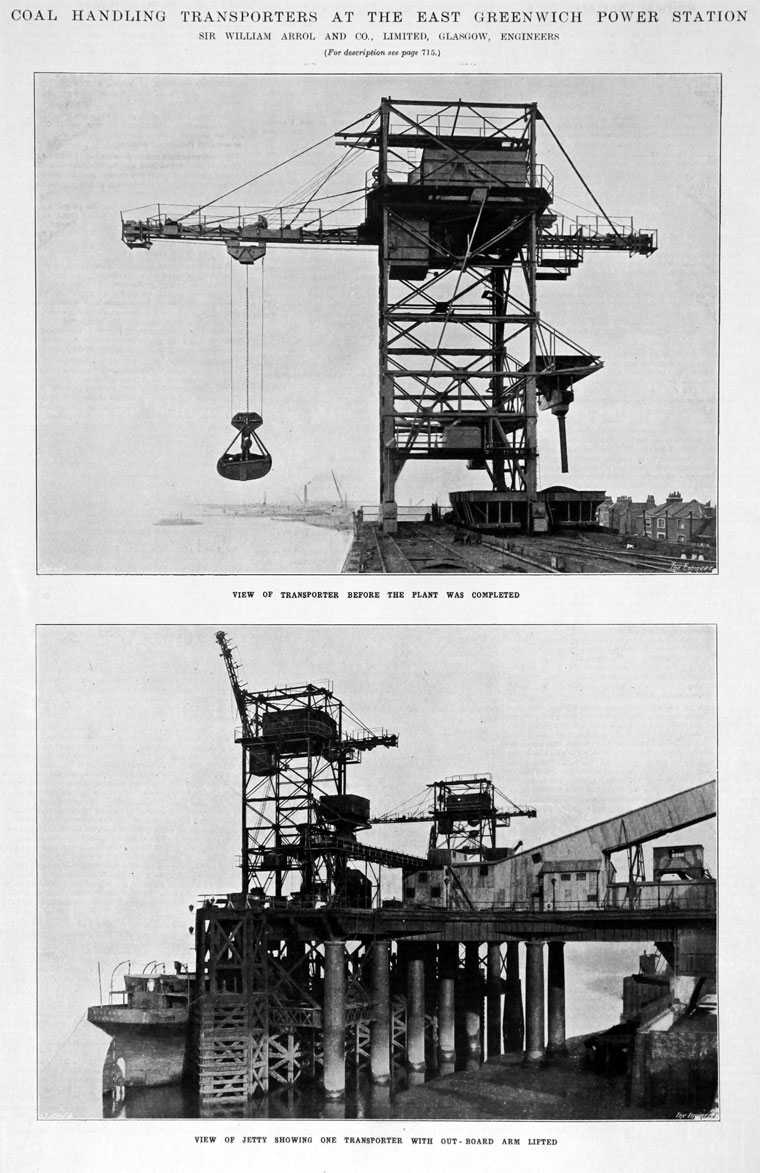 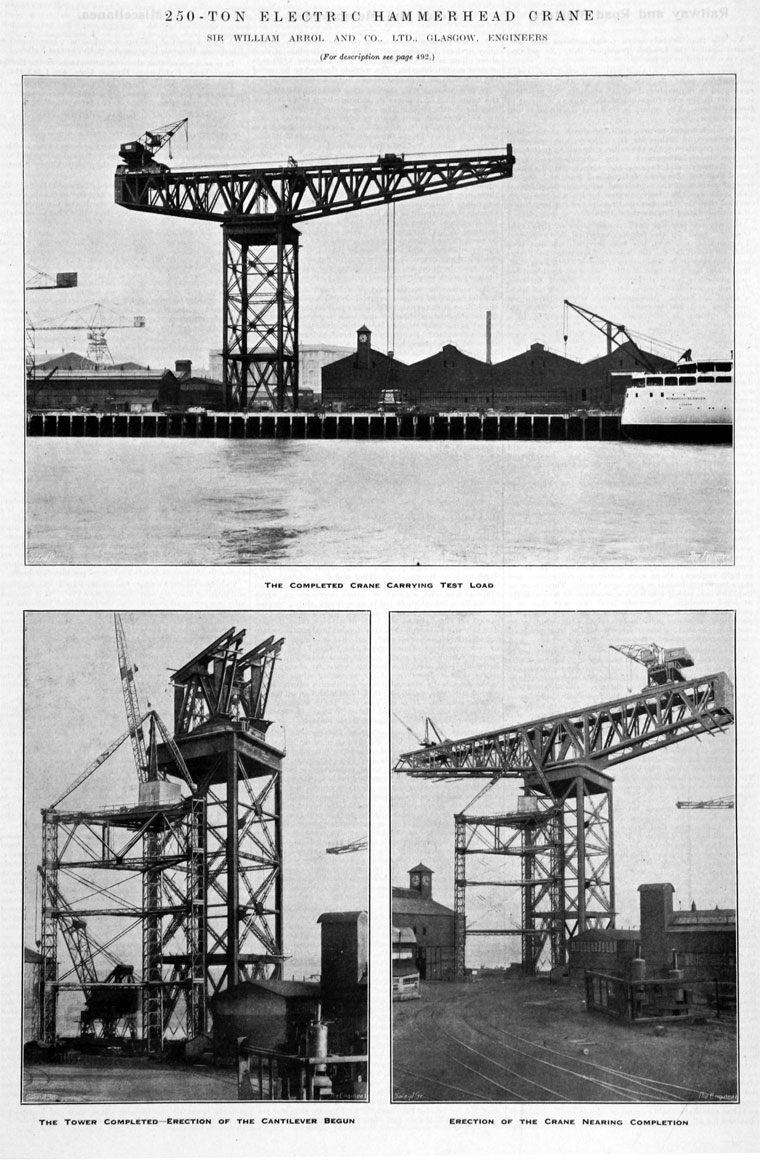 1931.Stages in the erection of 250 Ton Electric Hammerhead Crane. 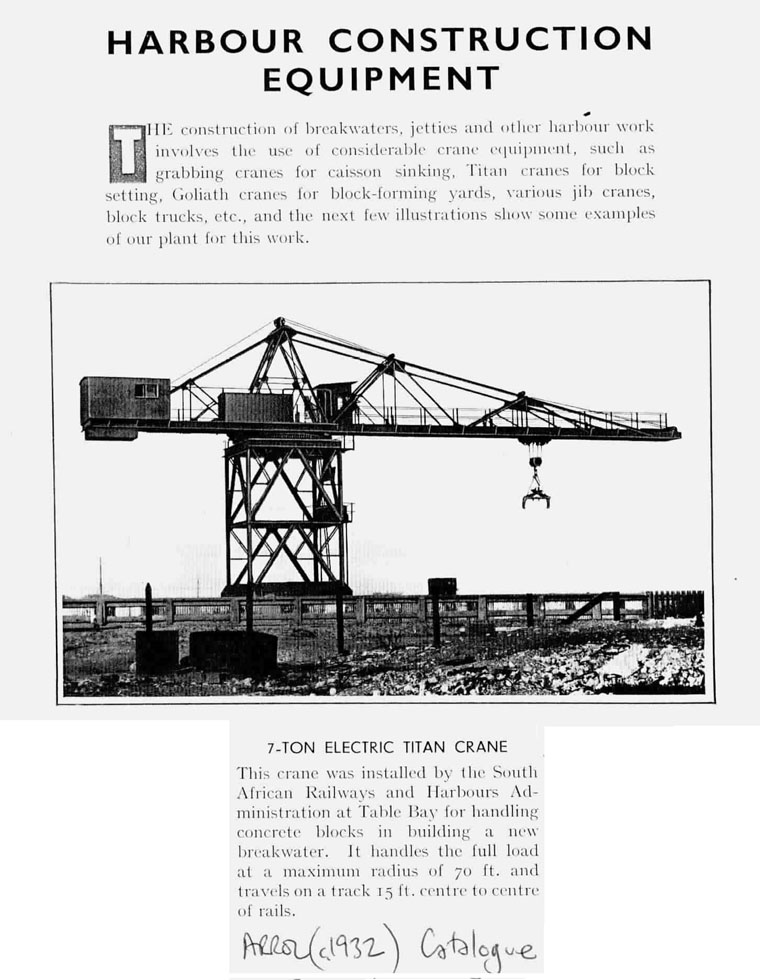 May 1932. Blocksetter Travelling Hercules - South African Harbours and Railways; for use at Table Bay , completed prior to 1932. 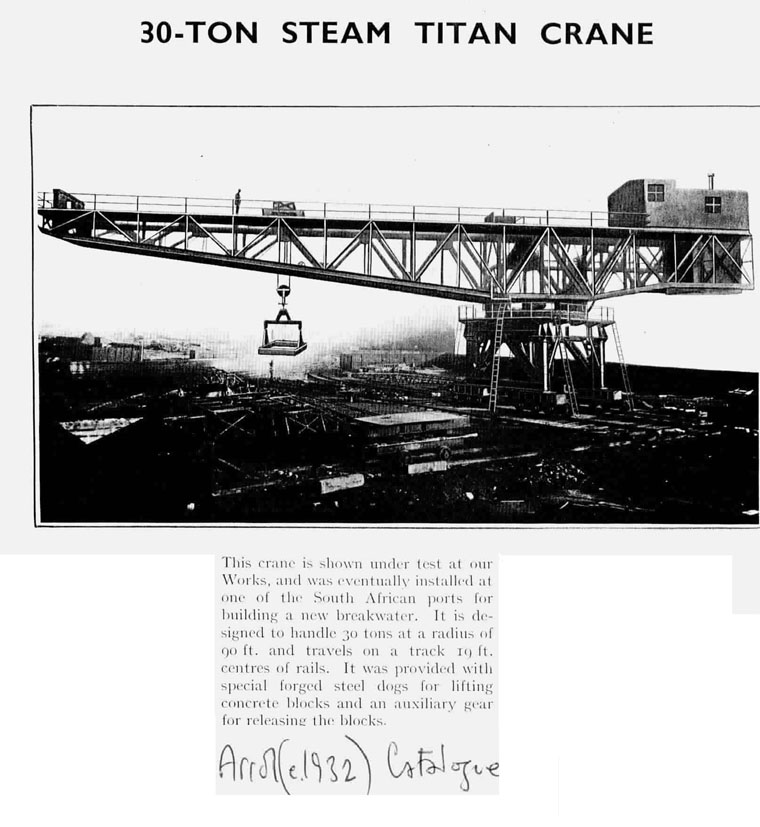 May 1932. Blocksetter Travelling Titan South African Harbours and Railways; for use at Durban , completed prior to 1932 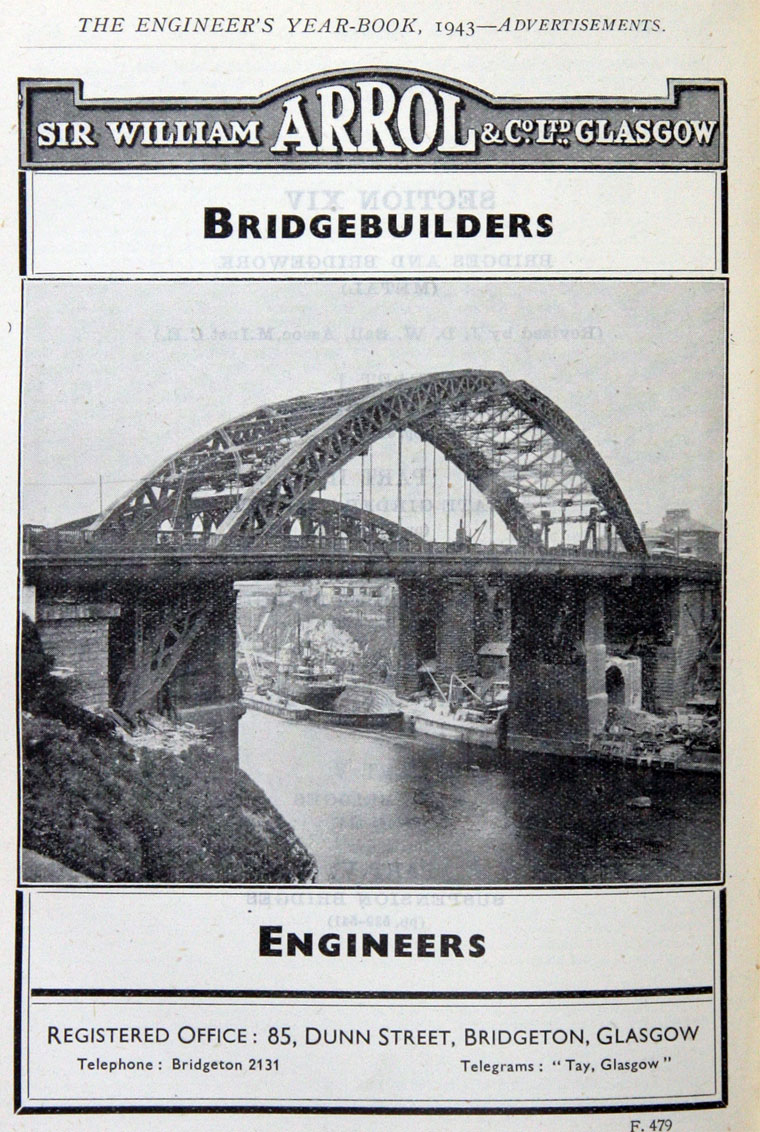 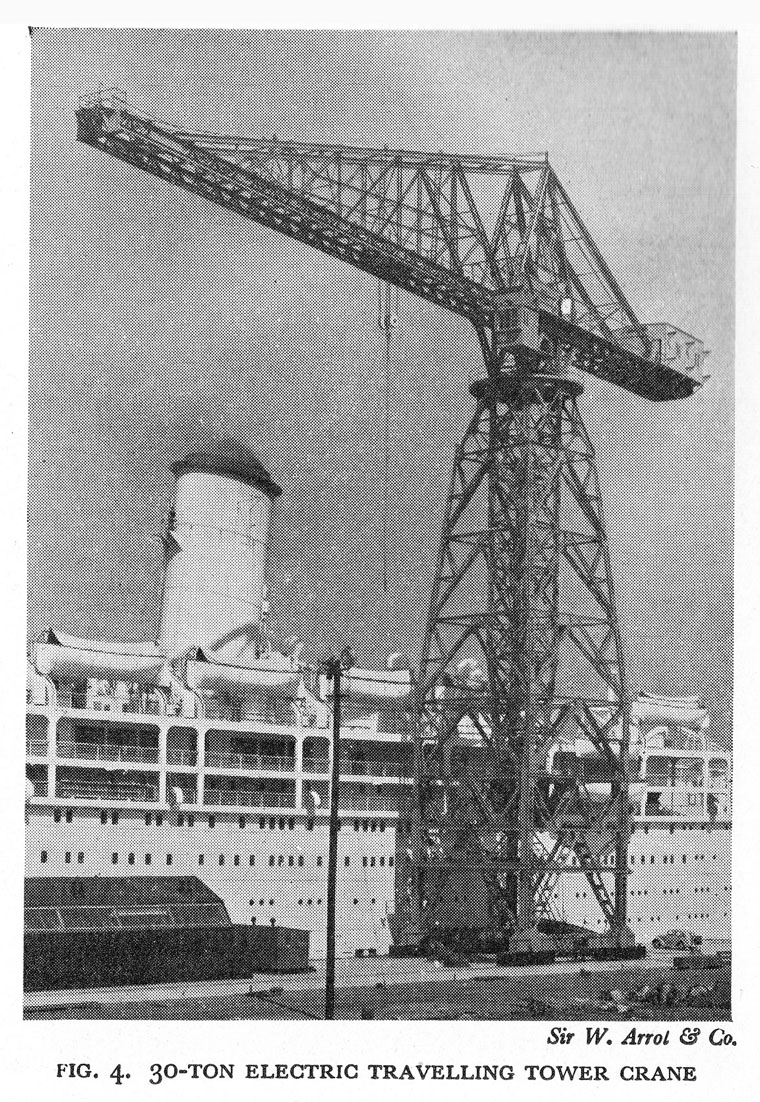 N.B. Should not be confused with Arrol Brothers, who were also bridge builders.

1868 Company established by William Arrol, a jobbing blacksmith and boiler maker, in a small workshop in Bridgeton.

1870-1 established the Dalmarnock Iron Works to take advantage of the growing opportunities in bridge building.

1873 The Forth Bridge Co entered into a contract with Mr Arrol to construct a suspension bridge across the Forth to Sir Thomas Bouch's design.

1878 Among Arrol's first important works was the iron bridge for the Caledonian Railway to carry it over the Clyde at Bothwell where he put into practice his idea of building the structure on land and then rolling it out, span by span, over the water.

This job was followed by construction of the bridge for the Caledonian Railway's Central Station over the Clyde at Broomielaw, the long viaduct over the South Esk at Montrose, and the bridge crossing the Paraguassu River at Bahia.[3]

1879 After the Tay Bridge disaster the design for the Forth Bridge was abandoned.

1881 William Henry Barlow designed the replacement Tay Bridge; this was a double-track bridge 59 ft upstream of, and parallel to, the original bridge. In 1882 Arrols was awarded the contract to build the new bridge.

1883 Awarded the contract for the most important part of the Forth Bridge[4] to the new design of Fowler and Baker. William Arrol associated himself with Joseph Phillips, Sir Thomas Selby Tancred and Mr. Falkiner as Tancred, Arrol and Co for the construction of the bridge.

1893 Public company. The company was registered on 2 January, to acquire the business of engineers and contractors, established by William Arrol.[6]

1900 Illustrations and descriptions of the works at Dalmarnock. [7]

1900 Supplied the spans for the Redheugh Bridge for road traffic in Newcastle upon Tyne, railway bridge at St Enoch's in Glasgow, and the North British Central Station in Leith; also supplied caissons and installed for the Clyde Trust, air plant for use in Egypt and a new boiler works for David Rowan and Sons in Glasgow[9]

Many improvements were introduced by William Arrol into the manufacture of town-gas. William Foulis in conjunction with Sir William Arrol constructed the Arrol-Foulis machine, worked by hydraulic power, for charging and drawing retorts, the water also being used to cool the shovel of the charger and the rake of the drawer.

c.1910 Acquired Appleby Crane and Transporter Co[10]. This added a third leg to the business.

Supplied a 35 ton steam travelling rail crane to the War Office, prior to 1914. It was at Shoeburyness School of Gunnery in late 1914, and last recorded there in 1927. The machine was in some respects not dissimilar to a railway breakdown crane, but was well out of gauge for use on British railways. It had 9 ins. x 12 ins. cylinders, arranged horizontally, the entire machinery being carried low down in the side frames. A light lift was provided and the control levers were grouped in a frame situated near the jib foot. The carriage had five axles and it was specified to negotiate curves of 300 feet radius. The superstructure was supported by live race and short king pin thus representing the new concept in design. (see image on right)[11]

1923 William H. Hutchinson joined the board of the company, looking after the general contracting side of the business.[13]

1925 Hubert E. Mayhew was appointed as sole agent in the London District.[14]

1926 Received an order for twenty-one "Arrol-Whitaker" electric power navvies for excavation work. It was thought that this was the largest single order ever placed for electric shovels.[15]

1926 Received from the Crown Agents for the Colonies an order for a 50-ton steam floating crane for use in the port of Lagos.[16]

1927 See Aberconway Chapter XV for information on the company and its history.

1927 April: Rumours were started that the works of Sir William Arrol and Co at King's Dock, Swansea, which had recently closed down on account of the bad state of the steel trade, were likely to be acquired by A. D. Dawnay and Sons, of Battersea and Cardiff [17]