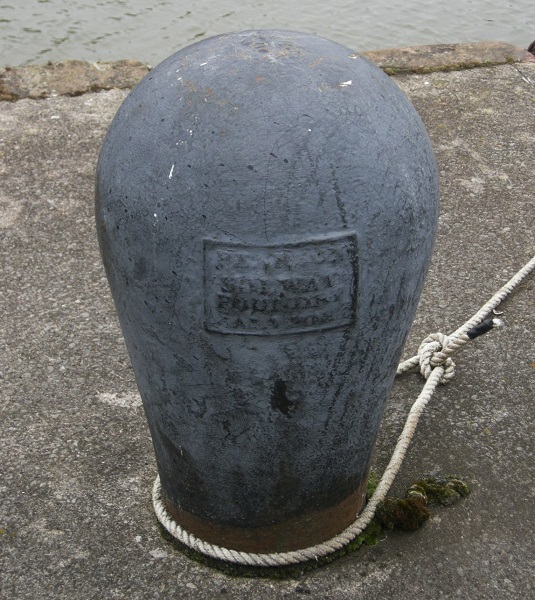 Joseph Pearson and William Pearson were the proprietors for many years.

MARYPORT. HER MAJESTY’S ROYAL LETTERS PATENT, granted to Mr. JONATHAN FELL, Shipbuilder, Workington, for an IMPROVED METHOD of FASTENING the BEAMS to the SIDES of SHIPS or other vessels.
J. and W. PEARSON, Solway Foundry, Maryport, the proprietors of the above-named Patent-right, beg to direct the attention of Shipbuilders and Owners to this Invention; and have to observe that it has received the sanction of Lloyd’s to stand 12 A1 in vessels built to the usual rules, and that all vessels hitherto on this plan (the names of which, with any other particulars that may required, will be furnished on application,) have given the greatest satisfaction to the owners, and all parties interested in their stability and economy, as well as by the peculiar advantages this plan possesses over any other mode of fastening, allowing a fresh circulation of air through the vessel. To Proprietors and Builders of large Steam Ships, where the tendency to work, as it is technically called, is greater than in Sailing Vessels, this plan of fastening is of the greatest Importance, as they can at any time screwed any degree of tightness. Maryport. Dec. 29, 1840.' [1]

1851 Advert: 'TO ENGINEERS, SHIP BUILDERS, COLLIERY PROPRIETORS, MILLWRIGHTS, &c.
WILLIAM PEARSON begs to intimate to his Friends, and the Public generally, that he has RECOMMENCED BUSINESS in Maryport, in that Old-established Iron and Brass Foundry and Machine Shop which he formerly occupied, called the Solway Foundry and trusts his long experience in, and intimate knowledge of each department of the Business, the large and extensive Assortment of Patterns in the Establishment, and strict personal attention to Orders confided to him, merit their confidence and Patronage. William Pearson also has the exclusive privilege to manufacture "Fell's Patent Ships Bindings," which he supplies on the shortest notice, and on very reasonable terms. Solway Foundry. Maryport, June, 1851.' [2]

1856 Advert: ' TO ENGINEERS, COLLIERY PROPRIETORS, AND MILLOWNERS.
MR. WILLIAM RICHARDSON, Philosophical Instrument Maker and Public Lecturer on Electricity and Pneumatics, has appointed WILLIAM PEARSON, Solway Foundry, MARYPORT, his AGENT for the SALE of his STEAM and WATER PRESSURE GUAGES, constructed on strictly Scientific Principles, accurate in their indications, of great durability and practical use, at very Low Prices. Solway Foundry, June 26, 1856.[3]

A fine antique Wm. Pearson calendar shelf clock with an fusee movement, with continuous worm and bevel gear drive for the calendar mechanism, square silvered dial with an outer time chapter ring and three inside dials, made by Wm. Pearson, Solway Foundry, was featured in a clock price guide, here. An odd product for a foundry, but perhaps not inconsistent with the sale of pressure gauges from the premises.