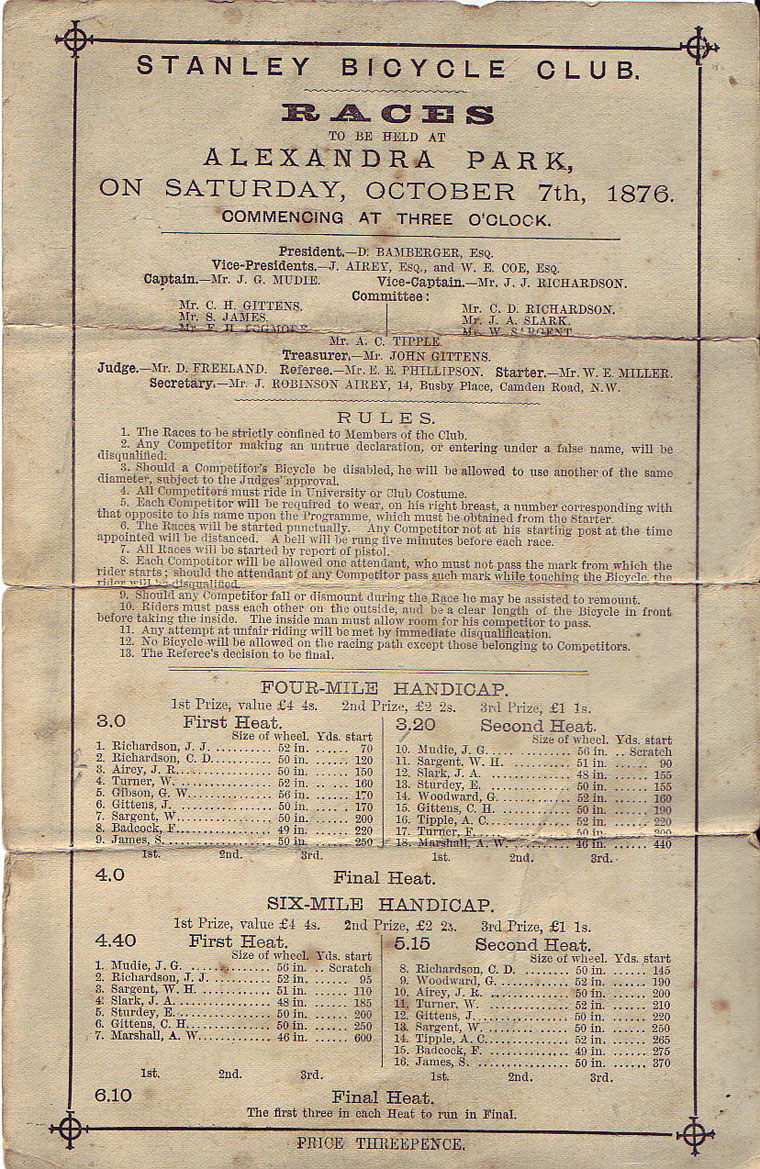 1877 September 8th. Report of second annual race. 'Under the auspices of the Stanley Bicycle Club, of which Sir Sydney H. Waterlow, M.P., is president, the second annual race meeting was held Saturday at the Alexandra Park. The meeting was an unusually large one, there being, in addition to the members of the club itself, nearly sixty riders entered for competition in the Two Mile open event. The races commenced with a One Mile Club Handicap, for which there were 17 entries, and in which the ground was covered by the winner in 3min. 20sec. Four Mile Handicap followed, the first heat of which was done by the winner in 15min. 3sec., the second heat in 14min. 35sec., the third heat in 15min. 23sec., and the fourth in 14min. 53sec. Then came the Two Mile Open Handicap, for which there were seven heats, the shortest time being taken by the winners of fourth and fifth heats, viz., 6min 18sec. In the final heat for the Foot Mile Club Race the winner performed his task in 13min. 51sec., and in that for the Two Mile Open Handicap the winner reached his goal in 6min. 19sec. At the conclusion of the races the president delivered to the successful competitors the prizes, consisting of silver cups, in value ranging from twelve guineas one guinea'[2]

1878 April. Report on ride. 'Two members of the Stanley Bicycle Club, Messrs. Charles and David Waterlow, arrived the Bade Haven yesterday evening, having passed the Easter Holiday in a journey from Highgate to Guildford, thence, by Salisbury, to Blandford, and yesterday from Dorchester, doing the whole journey on the bicycle, and coming into the Bude Haven as fresh as colts.'[3] 'The announcement of the arrival in Exeter of two members of the Stanley Bicycle Club, of London, attracted the attention of the Exeter Bicycle Club, the Hon. Secretary of which, Mr. J. Hingston Davey, with a deputation from the Club, waited on Messrs. Charles and David Waterlow at their Hotel yesterday morning, and kindly offered hospitable attentions to the intrepid travellers. This kindness was highly appreciated by them, but circumstances denied them the pleasure of accepting it. The Exeter Club numbers a score of members, and bids fair turn out superior riders on the slender horse.' [4]

1879 August. Report of fourth annual race. 'At Stamford Bridge yesterday the fourth annual meeting of the Stanley Bicycle Club was held under anything but favourable circumstances, the track being very holding, and the attendance small. In the Mile Novice Handicap the two scratch men H. Williams and C. M. H. Swan finished first and second respectively. The Five Mile Club Handicap fell to G. L. Hillier, who also started from scratch, and the Open Mile Handicap resulted in an exciting race between J. R. Hamilton, Druids, 15 yards start, and T. Wellbeloved, Surrey, 110, the former of whom won by six inches.'[5]

1893 Colonel Savile is President and J. Dring is the Secretary. [7]