About 1875, the firm of Starley Brothers was founded, the original works being in Fleet Street, Coventry. James Starley was the presiding genius, his three sons, James, John M., and William, actively carrying on the business. Part of the firm's output consisted of tangent wheels, which it built under the elder Starley's patent, and supplied to Haynes and Jefferis.

1882 Showed the 'Salvo Sociable' and the 'Royal Salvo'

1884 Starley Brothers moved to St. John's Works, and James Starley Junior severed his connexion with his two brothers. John M. Starley died in September, 1928. His younger brother William outlived him; he was affectionately known throughout the Midlands as “Bill".

1896, the firm was sold and amalgamated with the business of the Westwood Co, as Starley Brothers and Westwood Manufacturing Co.

William Starley invented the 'Starley Axle,' a live axle combined with a differential gear and four bearings all in line, in 1892, patent No. 7752. This is used on practically every tricycle to-day, and on nearly all motor-cars. [2] 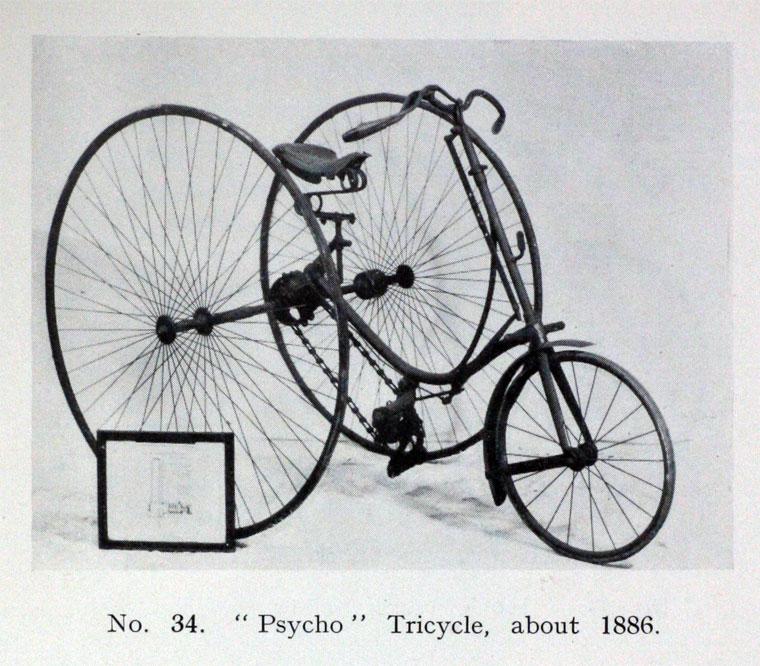 This was made by Starley Brothers, Coventry about 1886, and fitted with John Marshall Starley's patent automatic steering device, patent No. 8532/1885. By this ingenious apparatus (which is concealed in the main frame tube, immediately behind the steering head) the small steering wheel is kept in a straight line, and automatically returned to the straight after being diverted by the handlebar. To adjust the tension of the coil spring, which controlled the mechanism, the name-plate must be removed and a screw-driver inserted in the hole thus exposed. Note the front wheel mud-guard, a very early example of the "forward extension." Weight 76.5 lbs. Purchased in Ealing.

The name 'Psycho' was taken from a conjuring trick or illusion which, in 1885, was being presented by Messrs. Maskelyne and Cook, at the Egyptian Hall, London, and which took the form of a female figure which "automatically" played a game of whist with members of the audience who were invited to go upon the stage. Under the expert tutelage of the great magician Mr. J. N. Maskelyne, 'Psycho' generally won the game.