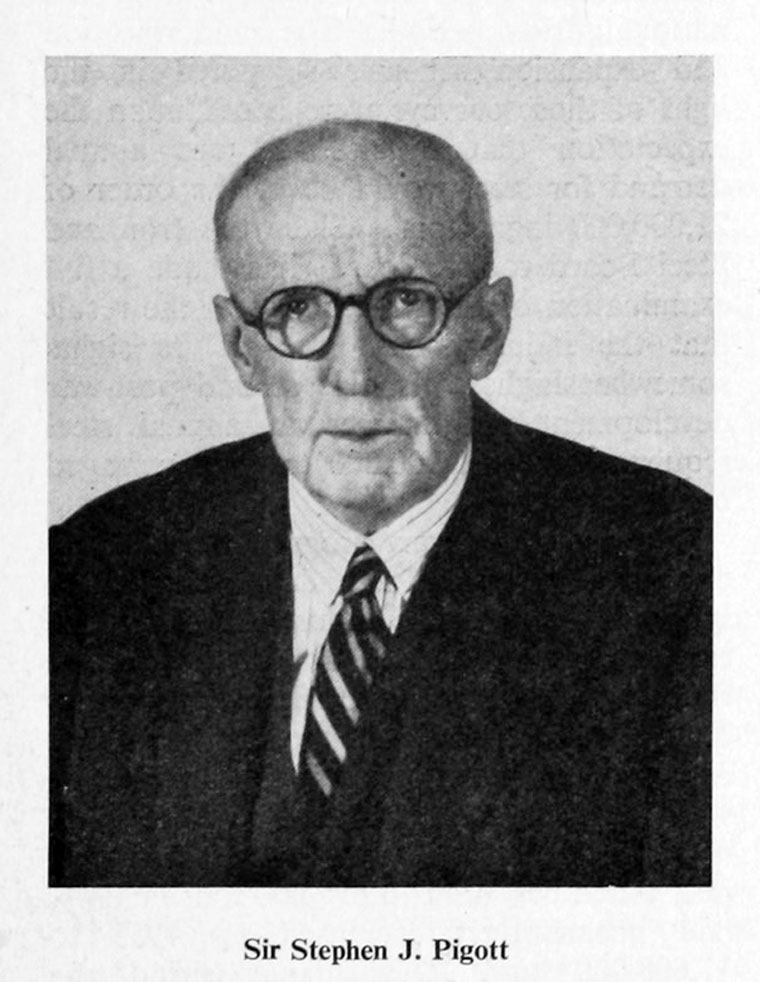 THE news of the death of Sir Stephen Pigott, which occurred on Sunday, February 27th, at his home, Closeburn Castle, Thornhill, Dumfriesshire, will have been received with considerable regret by marine engineers in this country.

He received his early education at the High School in his home town and then spent the next three years gaining engineering experience with a number of firms, including the Columbia Electric Vehicle Company and the E. W. Bliss Machine Shop, Brooklyn, before proceeding to Columbia University. Here he studied mechanical and marine engineering and took his degree in 1903.

During the following five years he acted as assistant to Mr. Charles G. Curtis in the development of the impulse turbine for marine propulsion, and then in 1908 he was invited by the Admiralty to come to Great Britain. A few months after his arrival in this country Stephen Pigott became associated with John Brown and Co., Ltd., as a specialist in impulse turbine work and so began his connection with the famous Clydebank firm which was to last for forty years until his retirement in 1948. From his work on the impulse turbine developed the Brown-Curtis turbine, which was adopted by the British Admiralty and was installed as the main propelling unit for a number of passenger liners engaged in the North Atlantic and other services.

His promotion was rapid and he became manager of the engine works, and his value to the company was recognised by his being appointed a local director in 1920. In the ensuing years, Sir Stephen worked in close association with the late Sir Thomas Bell and in 1934 he was made a full director of the company, and then a year later he succeeded Sir Thomas Bell as managing director, a post which he continued to hold until his retirement, due to ill health, in October, 1948.

Many changes took place in marine engineering theory and practice during the period Sir Stephen was at Clydebank and he was associated with and responsible for the engines installed in a large number of naval and merchant navy ships. Among such can be mentioned the battle cruisers H.M.S. "Tiger" and H.M.S. "Hood," the battleships H.M.S. "Barham" and H.M.S. "Vanguard," the Canadian Pacific liner "Empress of Britain," and that company's "Duchess" class liners, and many Cunard liners, including the "Aquitania," "Caronia" and the "Queen Mary" and "Queen Elizabeth."

With regard to the construction of the first of the large Cunard liners, he read a paper before the Institution of Naval Architects in 1937 entitled "Some Special Features of the 'Queen Mary.'"

Sir Stephen's energy and skill contributed greatly to the progress made in marine engineering, and his work was recognised when he was awarded, in 1938, the Gold Medal of the American Society of Mechanical Engineers for his outstanding leadership in marine propulsion and construction. Two years earlier his own university had recognised the value of his work and conferred upon him the Honorary Degree of Doctor of Science. His distinguished services to the advancement of engineering were rewarded when he received a Knighthood in 1939, and in the following year - 1940 - he received the Parsons Medal. In connection with the latter award, Sir Stephen delivered the Parsons Memorial Lecture before the North-East Coast Institution of Engineers and Shipbuilders, taking as his subject "The Engining of Highly Powered Ships."

From 1933 until 1952, Sir Stephen was a member of the Technical Committee of Lloyd's Register of Shipping, and he also served on the General Committee from 1936 until he retired in 1952. He was a member of the Worshipful Company of Shipwrights and a J .P. for Glasgow, and his death will be keenly felt by his many friends in the shipbuilding and marine engineering industry.

Sir Stephen Joseph Pigott, D.Sc., was educated at High School, Cornwall, New York, and Columbia University, where he obtained a degree in mechanical and marine engineering. Meantime, during vacations, he was engaged with Columbia Electric Vehicle Co. for three years, and subsequently worked in New York for five years as an assistant on the development of impulse turbines for ship propulsion.

In 1908 he came to Britain at the invitation of the Admiralty, and shortly became associated with John Brown and Co., Clydebank, as a specialist on the development work mentioned above. Later he occupied several executive positions before being appointed, in 1938, as Managing Director, responsible, until 1949, for all activities and management of the Clydebank works. He was knighted in 1939.

His death took place at the age of seventy-five on 27th February 1955.