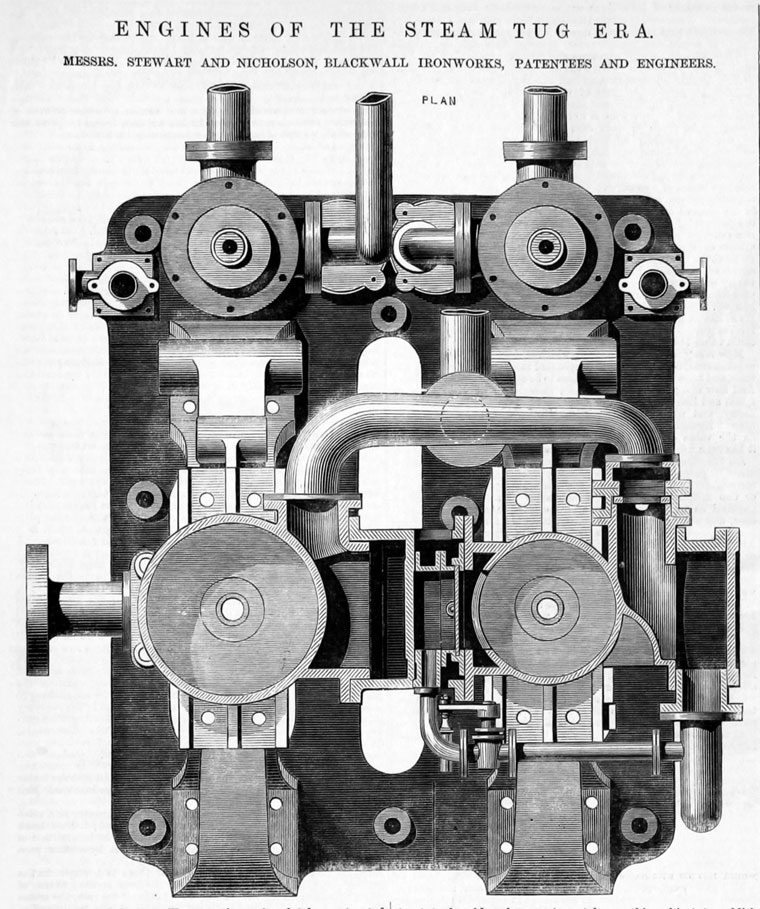 They fitted out the tug boat Era with their design of expansion engines. See below.

1869 'THE EXPANSIVE WORKING OF STEAM. The use of steam by expansion was practically begun more than 70 years ago in the Cornish engines, and was an economy necessitated by the almost ruinous expenses of mining operations at that period, have already arrived in these days at second period when a far more imperative and extended necessity for the economising of steam its almost universal application demands serious attention; and, indeed, there is at this moment as urgent need for considering the profitable use of steam power in the mercantile marine as there was for the initiating by the mine proprietors the means of saving coal, water, and steam in their far more limited operations.

'Working by expansion simply means, as every engineer well knows, tbe cutting off of the steam from entering the cylinder at any early part of the stroke, the volume of elastic vapour then shut in the cylinder being under strong compression, continues to expand behind the piston, driving it forward, and completing the stroke, at the end of which, however, the steam has little more power than is sufficient to balance the useless resistance of the machinery itself, tbe whole of its practical working force was this way got out of it. If for example the Cornish engines cut off the steam at one-eighth of the stroke, they effected a saving of more than cent per cent[?] in the same engines previously using their steam non-expansively. The motion, however, of these single cylinder pumping engines was unsuited for general application. The power of the steam was violent on its first entrance, and after the cut-off was constantly diminishing in pressure towards a zero like the uncoiling of a spring. Thus at each fresh injection of the cylinder the thrust was of the nature of jerk or blow, which, followed by the very different after action, together produced unequal motion in the running of the engine, necessitating correction by a fly-wheel, and while it did for simply lifting water would of too trying and even of too destructive a nature for ships or factories, where a perfectly equable movement of the machinery is of the very highest necessity.

'This primitive mode of expansion was improved upon some years after by compound engines having high and low pressure cylinders combined, the steam from the first smaller cylinder being taken in the ordinary way from the boiler for nearly the full stroke, and the contents then liberated into a larger cylinder, the piston which it worked entirely by expansion. This system, introduced by Mr. Woolfe, has subsequently received numerous modifications and improvements, especially in regard to the acquirement of better motion, and of late years numerous engines both for land and sea-service have been constructed on this principle.

'But notwithstanding all the various ingenuities displayed upon it there still remains the inherent defect of an actual resistance, the mean pressure on tbe large piston being constantly also the mean resistance upon the smaller one; that is say, the steam expanding in the larqe secondary cylinder is always opposing at lower pressure and over a smaller area, the steam entering at the higher pressure into the primary one; thus only a percentage more or less considerable of the actual steam power involved the stroke is available for working purposes, the most advantage being attainable in proportion to the relative dimensions of the cylinders. If both cylinders were of one size the engine would be next to useless, but if the proportions were made, say four to one, the gain would be in proportion the difference of the areas.

'The trial of the little tug boat Era on the Thames has drawn prominent attention to a third or "continuous expansion" system of working steam which appears to offer such superior economy of action and easy running as to deserve public explanation and discussion.

'The difference in principle between this new engine by Messrs, Stewart and Nicholson and that of Woolfe's is that the steam is taken from the boiler to half stroke of the small piston, which at this point passing cellular ports in the side of the cylinder in which it works, allows the steam to pass into the large cylinder, the expansion taking place in the primary and expansion cylinders at the same time, their respective pistons moving simultaneously in one and the same required direction of motion; and both cylinders being moreover connected to a surface condenser have each their own exhaust, and are in reality two condensing engines with like degrees of vacuum. In Woolfe's engines, on the contrary, one cylinder is condensing, the other noncondensing; there is consequently in the Nicholson or "continuous expansion" system the gain by the connection of the primary cylinder with the condenser of a vacuum in aid of its steam power in the place of a resistance acting against it.

'We do not deem it necessary to go into all the details of past productions in expansive engines, but we think it important to briefly note those points of the engines the Era which are valuable in their mechanical and economical aspects.

'The first of these points is the minimising of all spaces concerned with the transmission of steam from the primary to the secondary cylinder or cylinders, for two expansive ones can be used this system effectually, if desired, with the same primary, the consequence of such an arrangement being the most effectual extraction of power from the expanding steam and the improvement of the general motion of the machine by permitting a compensating balance in the arrangement of the cranks.

'The second is that the mimimum space in the transmission of steam is obtained by the substitution of a hollow valve or travelling steam chest for the ordinary steam valve, the steam not being allowed to go into the steam chest at all, but passing once through the hollow valve into either the top or bottom space of the cylinder, according to the direction in which the engine is running.

'A third important affair is the cellular ports, which are a series of perforations the wall or side of the cylinders for the passage of steam, and which being simple orifices have none of the disadvantages of valves so difficult to keep in order. The action in unison of the two pistons permits this simple device, the piston of the primary cylinder naturally opens and closes them in its ordinary act of passing, which is timed by the position given to these ports to be in harmony with the action of the expansion cylinder piston.

'Another important innovation is the introduction of retaining valve, which can be worked either by an eccentric or from the air-pump lever; and the duty performed by which is to regulate the quantity of steam taken into the expansion cylinder by closing the exhaust at a given time in the down stroke and reopening it on the return stroke, in which way the steam is kept in for a small portion of the return stroke, thereby giving to the large piston the full range of the expansion.

'We may well recapitulate the chief peculiarities of the "continuous expansion" engine in the Era —namely, that no secondary steam is employed but all is taken direct from the boiler; that the communication from the primary to the expanding cylinder is opened, as we have noted, by the primary piston in its passage over the cellular ports at about the half-stroke, the steam after that expanding alike and simultaneously on both pistons; and that both the pistons have an ordinary vacuum beneath them formed by the liberation of the used steam into the condenser every stroke. An advantage further exists in an emergency — especially of value in the triplet arrangement, namely, when the primary is connected with two expanding cylinders — which deserves to be noted. Supposing the vessel to be on a lee-shore, or a ship of war about to ram, or any other sudden occasion in which a spurt of strength is required to be made, a small amount of steam at high pressure can be jetted direct into the expansion cylinders during the period of their ordinary action, increasing enormously their power at very small expenditure of steam.

'The triplet arrangement permits also the use of disconnecting gear, so that the engine may be made to give reverse actions to the paddle-wheels. Altogether, there ought to be, theoretically, from this system a larger amount of work got out of a given quantity of steam and greater economy than from any previous expansion engines, and the few practical trials yet made confirm this thoroughly. The lavish waste of coal is making itself felt, and as year after year passes by it will be felt even more and more keenly. It is not fifty years since the great coal produce was inaugurated; and we who saw its first rise and beginning witnessed some of the consequences of extravagance. Instead of the waste which, now visible and evident in smoke and dirt, is offensive, there must be, as there ought to be, strong efforts in future engineering to devise the most economical and efficacious use of fuel. Messrs Stewart and Nicholson, we think, have won the position of pioneers in the right direction. Standard.'[1]

Note: The use of exhaust ports at the mid-length of cylinders would also feature in uniflow engines.

1874 The tug Era was used by C. F. Varley to demonstrate the principle of his coupling for reconnecting broken shafts at sea. 'The Engineer' referred to 'this fine little craft' and Stewart & Nicholson's 'admirable expansion engines'.[2]