This shows the limited headroom before the road was lowered 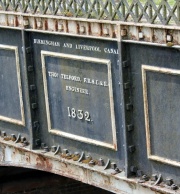 Note that some wording has been chiselled off the casting (above the date). See text

The aqueduct is skewed, and the junction between the halves of the arched ribs and the central transverse diaphragm plate was accommodated by a 'joggled' joint. Note, too, the sheet iron plates between the rib

Stretton Aqueduct is a short cast iron canal aqueduct between Stretton and Brewood, and near to Belvide Reservoir, in south Staffordshire, England.

Designed by Thomas Telford and bearing his name plus its date of construction, 1832, it carries the Shropshire Union Canal (formerly called the Birmingham and Liverpool Canal) 30 feet (9.1 m) over Telford's A5 road at a skewed angle.

The aqueduct has five sections, each 6 feet 6 inches (1.98 m) long, held together by bolts and supported by six cast iron arch ribs, each in two sections and joined at the centre of the arch. The castings were produced by William Hazledine of Shrewsbury. The trough is 21 feet (6.4 m) wide with an 11 feet (3.4 m) wide channel of water and a towpath on either side. The Staffordshire blue brick abutments have stone dressings.

Close scrutiny shows that some wording has been chiselled off the central panel castings (see photo). The missing text is 'William Hazeldine, Contractor', and was probably removed by supporters of the main contractors, John Wilson and his brother.[1]

During 1961-62, the A5 road under the aqueduct was lowered by about 4 feet (1.2 m) to allow taller vehicles to pass underneath.

It was one of Telford's last aqueducts and has been grade II listed since 1985.

Fortunately, the Romans anticipated the need for adequate road width when they built Watling Street. Unfortunately, it is now a fast road, with no room for pavements, making it dangerous for pedestrians. Best approached along the canal towpath.