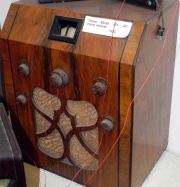 1924 Telsen Electric Co was formed in Birmingham by A. Macnamara, by renting a shed at 207 Aston Road.

1928 Took over a derelict factory in Miller Street where he formed New Star Radio.

1930 They moved to 56 Miller Street, and shortly after moved to their new factory at the corner of Philips Street and Thomas Street.

1931 Took over the old Moss Gear Co factory in Aston.

1933 The company went public. Incorporated in 1933, the Telsen Electric Company Ltd were manufacturers of wireless broadcast receivers, components and construction kits. They had a cabinet making department turning out polished furniture into which wireless receivers were built, mainly from their own components. They were also buying Bakelite cases from Edwin Elliot in Birmingham.

They produced every component one might require for the building of a wireless receiver at home, including the blueprint layouts to encourage tidy construction of receivers to the Telsen designs. The components were listed in a catalogue which later became incorporated into the Telsen Radiomag, which was published in Birmingham by James Cond Publishers.

c1933/34 The magazine was produced and ran for the six issues of volume one. There are no dates on the magazine covers and it appears that publication was irregular.

1934 Macnamara retired due to poor heath.

1935 Telsen was bought by David Rosenfield and the business was moved to Manchester where they produced a range of electrical appliances including Clothes Irons, Toasters and Christmas Fairy Lights. Here they were trading as the Telsen Electric Co(1935) Ltd and were at Fitzgeorge Street, Collyhurst, Manchester.