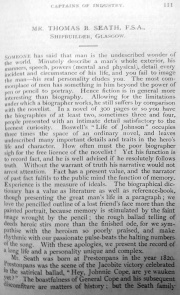 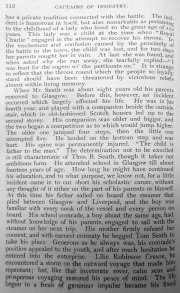 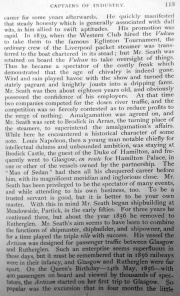 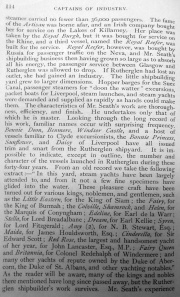 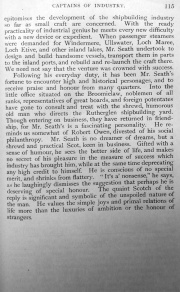 Buried in the Southern Necropolis, Glasgow

When Mr. Seath was about eight years old his parents removed to Glasgow. Before this, however, an incident occurred which largely affected his life. He was in his fourth year, and played with a companion beside the outside stair, which in old-fashioned Scotch houses led up to the second storey. His companion was older and bigger, and the two began a competition as to which would jump higher. The older one jumped four steps, then the little one attempted five. He landed on the bottom step and was hurt. His spine was permanently injured. "The child is father to the man." The determination not to be excelled is still characteristic of Thos. B. Seath, though it takes not ambitious form.

He attended school in Glasgow till about fourteen years of age. How long he might have continued his education, and to what purpose, we know not, for a little incident came in to cut short his scholastic career, without any thought of it either on the part of his parents or himself. At this time his father sailed on board the steamer that plied between Glasgow and Liverpool, and the boy was familiar with every nook of the vessel and every person on board. His school comrade, a boy about the same age, had, without knowledge of his parents, engaged to sail with the steamer on her next trip. His mother firmly refused her consent, and with earnest entreaty he begged Tom Seath to take his place. Generous as he always was, his comrade's position appealed to the youth, and after much hesitation he entered into the enterprise. Like Robinson Crusoe, he encountered a storm on the outward voyage that made him repentant; but, like that inveterate rover, calm seas and prosperous voyaging restored his peace of mind. The life begun in a freak of generous impulse became his fixed career for some years afterward. He quickly manifested that steady honesty which is generally associated with dull wits, in him allied to swift aptitudes. His promotion was rapid.

In 1839, when the Western Club hired the ‘Vulcan’ to take them to the famous Eglinton Tournament, the ordinary crew of the Liverpool packet steamer was transferred to the boat chartered in its stead; but Mr. Seath was retained on board the ‘Vulcan’ to take oversight of things. Thus he became a spectator of the costly freak which demonstrated that the age of chivalry is indeed gone. Wind and rain played havoc with the show and turned the stately pageant and knightly jousts into a dripping farce. Mr. Seath was then about eighteen years old, and obviously possessed the confidence of his employers. At that time two companies competed for the down river traffic, and the competition was so fiercely contested as to reduce profits to the verge of nothing. Amalgamation was agreed on, and Mr. Seath was sent to Brodick in Arran, the turning place of the steamers, to superintend the amalgamation's affairs. While here he encountered a historical character of some note. Louis Napoleon, then a young man notable chiefly for intellectual dulness and unbounded ambition, was staying at Brodick Castle, the guest of the Duke of Hamilton, and frequently went to Glasgow, en route for Hamilton Palace, in one or other of the vessels owned by the partnership. The "Man of Sedan " had then all his chequered career before him, with its magnificent meridian and inglorious close. Mr. Seath has been privileged to be the spectator of many events, and while attending to his own business, too.

To be a trusted servant is good, but it is better to be your own master. With this in mind Mr. Seath began shipbuilding at Meadowside, Partick, in the early fifties. For three years he continued there, but about the year 1856 he removed to Rutherglen. Mr. Seath's aim seems to have been to combine the functions of shipmaster, shipbuilder, and shipowner, and for a time played the triple role with success. His vessel the ‘Artizan’ was designed for passenger traffic between Glasgow and Rutherglen. Such an enterprise seems superfluous in these days, but it must be remembered that in 1856 railways were in their infancy, and Glasgow and Rutherglen were far apart, On the Queen's Birthday - 24th May, 1856 — with 400 passengers on board and viewed by thousands of spectators, the ‘Artizam’ started on her first trip to Glasgow. So popular was the excursion that in four months the little steamer carried no fewer than 36,000 passengers. The fame of the Artisan was borne afar, and an Irish company bought her for service on the Lakes of Killarney. Her place was taken by the ‘Royal Burgh’, but it was bought for service on the Rhine, and a third vessel, named the ‘Royal Reefer’, was built for the service. ‘Royal Reefer’, however, was bought by Russia for passenger traffic on the Neva, and Mr. Seath's shipbuilding business then having grown so large as to absorb his energy, the passenger service between Glasgow and Rutherglen was allowed to drop.

If Rutherglen had lost an outlet, she had gained an industry. The little shipbuilding yard grew to larger dimensions. Hopper barges for the Suez Canal, passenger steamers for "doon the watter" excursions, packet boats for Liverpool, steam launches, and steam yachts were demanded and supplied as rapidly as hands could make them. The characteristics of Mr. Seath's work are thoroughness, efficiency, and finish. He undertakes only that of which he is master. Looking through the long record of his work, familiar names occur with surprising frequency. ‘Bonnie Doon’, ‘Benmore’, ‘Windsor Castle’, and a host of vessels familiar to Clyde excursionists, the ‘Bonnie Princess’, ‘Sunflower’, and ‘Daisy’ of Liverpool have all issued trim and smart front the Rutherglen shipyard. It is impossible to indicate, except in outline, the number and character of the vessels launched in Rutherglen during these forty-four years. From an old record we take the following extract:- "In this yard, steam yachts have been largely attended to, and from it not a few fine specimens have glided into the water. These pleasure craft have been turned out for various kings, noblemen, and gentlemen, such as the ‘Little Eastern’, for the King of Siam; the ‘Fairy’, for the King of Burmah; the ‘Colville’, ‘Shamrock’, and ‘Helen’, for the Marquis of Conyngham; ‘Edeline’, for Earl de la Warr; ‘Sella’, for Lord Breadalbane; ‘Dream’, for Earl Kellie; ‘Syren’, for Lord Fitzgerald; ‘Amy’ (2), for N. B. Stewart, Esq.; ‘Maida’, for James Houldsworth, Esq.; ‘Cinderella’, for Sir Edward Scott; ‘Red Rose’, the largest and handsomest yacht of her year, for John Lancaster, Esq., M.P.; ‘Fairy Queen’ and ‘Britannia’, for Colonel Redehalph of Windermere; and many other yachts of repute owned by the Duke of Abercorn, the Duke of St. Albans, and other yachting notables!'

As the reader will be aware, many of the kings and nobles there mentioned have long since passed away, but the Rutherglen shipbuilder's work survives. Mr. Seath's experience epitomises the development of the shipbuilding industry so far as small craft are concerned. With the ready practicality of industrial genius he meets every new difficulty with a new device or expedient. When passenger steamers were demanded for Windermere, Ullswater, Loch Maree, Loch Etive, and other inland lakes, Mr. Seath undertook to design and build handsome vessels, transport them in parts to the inland ports, and rebuild and re-launch the craft there. We need not say that the venture was crowned with success.

Following his everyday duty, it has been Mr. Seath's fortune to encounter high and historical personages, and to receive praise and honour from many quarters. Into the little office situated on the Broomielaw, noblemen of all ranks, representatives of great boards, and foreign potentates have gone to consult and treat with the shrewd, humorous old man who directs the Rutherglen shipbuilding yard. Though entering on business, they have returned in friendship, for Mr. Seath's is a fascinating personality. He reminds us somewhat of Robert Owen, divested of his social philanthropy. Mr. Seath is no dreamer of dreams, but a shrewd and practical Scot, keen in business. Gifted with a sense of humour, he sees the better side of life, and makes no secret of his pleasure in the measure of success which industry has brought him, while at the same time deprecating any high credit to himself. He is conscious of no special merit, and shrinks from flattery. "It's a' nonsense," he says, as he laughingly dismisses the suggestion that perhaps he is deserving of special honour. The quaint Scotch of the reply is significant and symbolic of the unspoiled nature of the man. He values the simple joys and primal relations of life more than the luxuries of ambition or the honour of strangers.