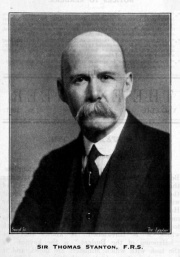 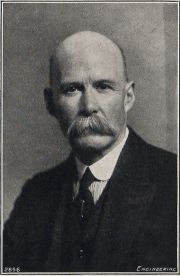 Three-year apprenticeship with the engineering firm of Gimson and Co

1896 Went to the University of Liverpool as senior assistant lecturer

1901 First superintendent of the engineering department when the National Physical Laboratory was established and remained until his retirement in December 1930.

Stanton supervised researches into hydrodynamics, the strength of materials, heat transmission, and lubrication, was also concerned with the dynamics of air.

1921 Stanton built the first effective supersonic tunnel in the world, 3 inches in diameter, where he could measure the drag of projectiles, and later also of aerofoils, at up to 3.2 times the speed of sound.

Sir THOMAS ERNEST STANTON, C.B.E., D.Sc., F.R.S., was appointed superintendent of the engineering department of the National Physical Laboratory upon its inauguration in 1901 and retained this position until his retirement in December 1930. During this long period he had been responsible for a great many engineering researches, and contributed many valuable papers to engineering societies. His papers before the Institution included one on "The Efficiency of Centrifugal Pumps," read in 1903, another on "Resistance of Materials to Impact," read in 1908, a Report to the Hardness Tests Research Committee in 1916, and a Report to the Cutting Tools Research Committee in 1925.

In 1912 he gave a lecture to the Graduates on "Recent Researches at the National Physical Laboratory, Teddington," and in 1922 he was the Thomas Hawksley Lecturer, the title of his Lecture being "Some Recent Researches on Lubrication." His book on "Friction," published in 1923, was one of his outstanding works. He was a Member of Council of the Institution during the years 1921-3.

Sir Thomas Stanton was born and educated at Atherstone, Warwickshire, and served his apprenticeship with Messrs. Gimson and Company of Leicester from 1884 to 1887.

He then went to Owens College, Manchester, where he graduated in 1891.

For the following five years he worked under Professor Osborne Reynolds as demonstrator in the Whitworth Engineering Laboratory, and it was during this period that he acquired much of the skill shown in his experimental work.

In 1896 he was appointed senior lecturer at University College, Liverpool, where he obtained the degree of Doctor of Science in 1908.

In 1899 he was appointed Professor of Civil and Mechanical Engineering at University College, Bristol, and it was whilst at Bristol that he received his appointment to the National Physical Laboratory.

The news of the death of Sir Thomas Stanton, D.Sc., F.R.S., which occurred on Sunday last, at Pevensey Bay, near Eastbourne, where he was recuperating after an operation, will have come as a severe shock to the engineering profession, in which he was highly esteemed, both for his personal characteristics and for the valuable contributions he had made to the scientific side of engineering work. Sir Thomas, it will be remembered, retired from the position of Superintendent of the Engineering Department of the National Physical Laboratory, in December last, having then attained the age limit. He was, however, offered, and took advantage of, facilities for continuing some of his personal research work at the Laboratory.

Thomas Ernest Stanton was born at Atherstone, Warwickshire, on December 12, 1865, and received his general education at Atherstone Grammar School. After serving a pupilage of three years with Messrs. Gimson and Company, engineers, Leicester, from 1884 to 1887, he studied for the same period at Owen’s College, Manchester, obtaining the B.Sc. Engineering Degree in 1891. For the next five years, he worked as a demonstrator in the Whitworth Engineering Laboratory of Owen’s College, acting as assistant to Professor Osborne Reynolds, and it was doubtless during this period of his training that he acquired much of the experimental skill and ingenuity that has characterised his career. In 1896, when Dr. Hele-Shaw required a senior lecturer in engineering for University College, Liverpool, the post was offered to and accepted by Mr. Stanton, though we believe that Professor Osborne Reynolds parted with him with considerable reluctance. He remained at Liverpool until 1899, obtaining his doctorate in 1898, and was then appointed Professor of Civil and Mechanical Engineering at University College, Bristol, remaining there until appointed Superintendent of the Engineering Department of the National Physical Laboratory, when inaugurated in 1901.

Here he was engaged in research work in connection with hydrodynamics, the strength of materials, heat transmission, lubrication, &c. His early work dealt with the flow of water in channels of varying cross-section, of which an account was given in our columns in 1902.* About a year later, he contributed a paper to the Institution of Mechanical Engineers on the “ Efficiency of Centrifugal Pumps,” His well-known alternating-stress testing machine was described in our issue of February 17,1905, and his repeated impact-testing machine in Engineering for July 13, 1906. In November, 1908, he described, with Dr. L. Bairstow, their joint work on the resistance of materials to impact, in a paper read before the Institution of Mechanical Engineers, but it is probable that his name will be best remembered for his classical work on the laws of fluid flow in pipes, carried out jointly with the late Mr. J. R. Pannell, and published in 1914 in the Transactions of the Royal Society. This work established experimentally the laws previously enunciated by Professor Osborne Reynolds, and is still constantly referred to in investigations on this subject. Among other work in hydrodynamics, mention should be made of his investigations on the resistance of thin plates and models in a current of water, which formed the subject of a paper read before the Institution of Naval Architects in 1909. Another paper contributed to that Institution in 1912, dealt with the law of comparison for surface friction and eddy-making resistance in fluids. He also carried out, in 1911, a research on the mechanical viscosity of fluids as affected by the speed and by the dimensions of the channel, using air which was forced through cylindrical pipes at speeds above the critical. An account of this work will be found in the Proceedings of the Royal Society, A, vol. lxxxv, and also in his book on Friction, published in 1923. This book was largely concerned with the author’s work on lubrication, the latter part developing the boundary theory.

Much of the earlier work of the National Physical Laboratory in aerodynamics was due to Dr. Stanton, since aerodynamics was, for several years, a subsidiary division of the Engineering Department of the Laboratory. Reference to this work was made in the first report of the Advisory Committee for Aeronautics for 1909-10, and the early equipment designed by Dr. Stanton for experimental aerodynamic work, including a vertical wind channel, whirling arm and towers for wind velocity investigations, was also then dealt with. Although aerodynamic work eventually outgrew the capacity of the Engineering Department, and was transferred to a separate department, Dr. Stanton’s interest in aerodynamics by no means ceased. As an instance of this, we may mention that comparatively recently he was engaged in tests for the Airscrew Panel on aerofoils at speeds in the neighbourhood of the velocity of sound in air; this work was dea't with in Reports and Memoranda, No. 1130, dated January, 1928.

Of perhaps more direct engineering interest were the experiments on hardness tests carried out by Dr. Stanton and Mr. R. G. Batson for the Hardness Tests Committee of the Institution of Mechanical Engineers, which formed the subject of a report presented to the Institution in the 1916-17 session. Dr. Stanton also suggested the design of the apparatus from determining the viscosity of liquids at high pressures, which was developed and used by Mr. J. H. Hyde. With Mr. Hyde, also, he carried out the experimental work for the Cutting Tools Research Committee of the Institution of Mechanical Engineers, the report on which was printed in our issue of January 30,1925.

Dr. Stanton became an associate member of the Institution of Civil Engineers in 1894, being made a full member ten years later. In 1899, he was awarded a Telford Premium by this Institution for a paper on “ The Efficiency and Design of Surface Condensers,” while in 1906, he received the George Stephenson Gold Medal for his joint paper with Dr. Bairstow, on “ The Resistance of Iron and Steel to Reversals of Direct Stress.” For his paper on “ Notched-Bar Impact Tests ” he received the Telford Gold Medal in 1921, and he was awarded the Howard Quinquennial Prize in the following year in recognition of his researches and writings on the properties of iron and steel. As recently as May last, he delivered the James Forrest Lecture, choosing for it a subject on which he was particularly competent to speak, viz., “ Engineering Research.” He was elected a member of the Institution of Mechanical Engineers in 1919.

In the above we have been able to give only a brief outline of the life work of Sir Thomas Stanton, Reference to our own columns covering the last thirty years and other records, would bring to light much more. What we have mentioned, however, should give some indication of the directions in which he has served the engineering profession and industry. That his efforts were not unappreciated by the former may be gathered from the awards he received, some of which have been mentioned above, and that they were also recognised by the nation is evidenced by the fact that he received a Knighthood in 1928, having previously been made a C.B.E. for his work during the war. He was elected a Fellow of the Royal Society in 1914, serving on the Council from 1927-1929. He also served on a number of Government Committees and in an advisory capacity during the restoration of St. Paul’s Cathedral."