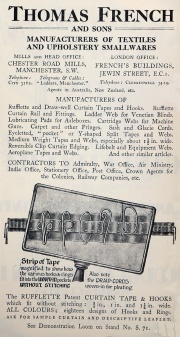 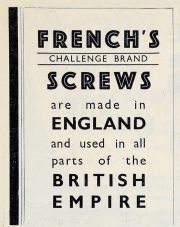 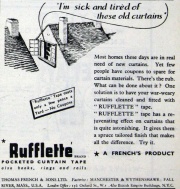 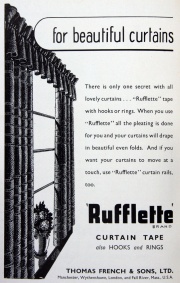 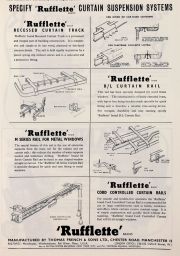 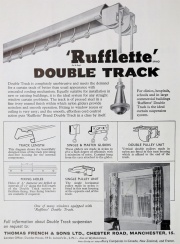 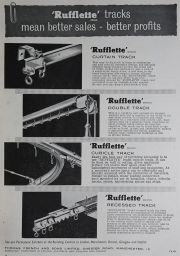 1835 Thomas French was born in Manchester. The textile industry was flourishing, especially narrow fabrics and ‘smallwares’ - ribbons, tapes, braids. Manchester was the country’s major producer of such wares and the number of manufacturers grew to more than 100.

Thomas built up his extraordinary knowledge of narrow weaving as he worked for James Carr and Sons Ltd. Whilst he worked there, he invented a new method of making ladderweb. Eventually he became frustrated by lack of acknowledgement of his invention and left to up in business on his own.

1882 At the age of 47, and with his partner John Monks, he took a small room in Hulme and founded his company, the beginnings of Thomas French and Sons. They soon developed and sold a wide range of webs and tapes and the original patent for ‘woven throughout Venetian blind ladder-web’ is in their name.

1908 At the age of 73, Thomas died, and George French became the new company head. His contribution to the company set the pattern in the years ahead. He had a flair for practical invention which bordered on genius and the company developed a unique range of fabric and metal small wares such as curtain tags, hooks and runway fittings. Later, even machine gun clips were added to the product range. Over the next 30 years, more than 100 patents were taken out by George French; many of them improvements for looms or narrow fabrics.

1914 The war concentrated the company’s efforts on more sombre matters. Its expertise in bonding metal and fabric was to prove vital in the production of khaki web equipment and it became an important government supplier, eventually being commandeered. Everyone knew that making and washing curtains was a chore. Tedious hand sewing of curtain rings or hooks onto curtain tape was a fact of life, but now Thomas French and Sons found itself with a unique weaving principle that would lead to a new concept in curtain tape.

1922 Production began of Rufflette, the world's first pocketed curtain pleating tape. This tape came complete with drawcords and pockets for hooks. Even today, the same basic principles are used. A natural progression a few years later, was the launch of Rufflette curtain rail and hooks, which the company promoted by being one of the period's leading advertisers.

1930s The company’s first advertising agency was appointed and the Rufflette brand name began to achieve real prominence. By now, George French, working mainly behind the scenes, was responsible for new ideas and inventions and had been joined by his adventurous son Roger.

1932 The arrival of ‘electricity for all’ transformed the company’s Chester Road works and four years later sales of Rufflette products reached record levels. Once again, the threat of the war hung over Europe and efforts had to be concentrated on machine gun belts. Even so, the search for ever-better effects in curtain headings went on and Thomas French was the first company to overcome drooping headings with the launch of Giraffe the first deep heading tape; patented by Roger French.

1950 Just as gun belts had led to the original development of Rufflette tapes, so the engineering skills developed in progressing from woven gun belts to metal articulated belts leading to more improvements in the firm’s product range. Increasingly sophisticated curtain fittings, military equipment and an amazingly diverse range of products were now being made.

As the demand for military equipment decreased and traditional markets vanished forever, new ones opened up. At home, public pressure for Do It Yourself products pushed sales of Rufflette products to an all-time high. Consumers showed that they wanted brand names they knew and when a leading UK store introduced its own ready-made curtains for the first time, they were to advertise them as having Rufflette tape headings.

1954 George French died. Box Pleat, Pinch Pleat and Deep Pleat tapes, all developments in deeper headings with different pleating effects, soon followed and Rufflette was one of the first products to be advertised on the new ITV channel.

Roger French became chairman and his father left him an enormous legacy of patented designs and manufacturing techniques. Rufflette, meanwhile was going from strength to strength in the curtain hanging business as efforts to promote cross-the-counter-sales doubled. Regis tape now proved its value as the nation’s curtains came out from behind pelmets and displayed themselves on attractive, streamlined decorative track.

1969 Roger French died, just before his 65th birthday. He was succeeded as chairman by William Wood, who played an important part in the company’s fortunes for years. He too died, just before retirement in 1974 and control of the company passed to Thomas French’s great grandson, Jeremy, who became Chairman and Managing Director. The general running down of the company’s engineering production, the need to modernise weaving equipment and the unsuitability of the original site for modern production techniques finally brought about the closure and sale of the factory on Chester road.

1973 The K-flex surface heating products were well established and the new factory was working at capacity. The engineering company had been closed[7]

1974 The group moved its weaving operations and head office to Wythenshawe and it once again embraced major changes in manufacturing techniques as needle looms began to replace old shuttle looms. New, faster looms enabled weaving to take place in one location with much faster output.