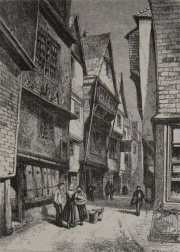 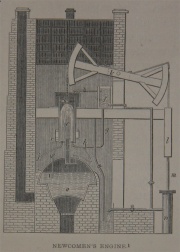 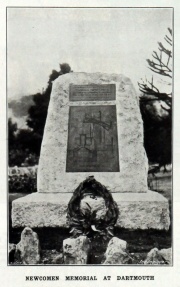 Elias, his father, was a freeholder, shipowner, and merchant, and his first wife was Sarah (d. 1667). Thomas' grandfather was Thomas Newcomen (d. 1652), a merchant venturer and shipowner, who may have led the Dartmouth Newcomens away from the established church to join the Baptists.

His great-grandfather was Elias Newcomen (1547/8–1614), rector of Stoke Fleming, near Dartmouth, who married Prothesa Shobridge of Shoreditch in 1579. Shortly after the death of Thomas's mother, Elias married secondly on 6 January 1668, Alice Trenhale of Kingswear and she brought up Thomas.

Possibly apprenticed to an ironmonger in Exeter.[1]

1705 Patent granted to Thomas Newcomen, John Crawley (Calley) and Thomas Savery for an engine in which steam was introduced under a piston and condensed, and reciprocating motion was produced by attaching it to a lever.[2] [3]. However, Rhys Jenkins stated in 1923 that no evidence of such a patent had been found [4].

In 1707 Newcomen either renewed or took out new leases for a number of properties in Dartmouth. The chief of these was where he lived in North Town, abutting Higher Street in the west and Lower Street in the east. There were also some ‘cellars or ground rooms’ that may have been the site of his workshops, where he was to experiment. Newcomen's partner was John Calley (1663–1717), a glazier and member of an ancient Dartmouth family.

He was an ironmonger by trade and a Baptist lay preacher

This is a part of the country noted for its tin mines and flooding was a major problem, limiting the depth at which the mineral could be mined. Newcomen perfected a practicable steam engine for pumping water, the Newcomen Engine. Consequently, he is often referred to as a father of the Industrial Revolution.

He could be said to have been more than a lay preacher as he was a teaching elder in the local Baptist church. That he continued in business is almost certainly because the church could not afford to pay him as a full time elder. His father had been one of a group who brought the well known Puritan John Flavel to Dartmouth. Later one of Newcomen's business contacts in London, Edward Wallin, was another baptist minister who had connections with the well known Dr John Gill of Horsleydown, Southwark. Newcomen's connection with the Baptist church at Bromsgrove materially aided the spread of his steam engine.

Newcomen's great achievement was the Newcomen Engine. It is not known when he embarked on its development but he had installed his first pumping engine by 1711. Some aspects had been anticipated and demonstrated by Thomas Savery and Denis Papin. In 1698 Savery had patented his 'fire engine', a kind of thermic syphon, in which steam was admitted to an empty container and then condensed. The vacuum thus created was used to draw water from the sump at the bottom of the mine. The lift to the vessel was limited to about thirty feet. Sketches show an arrangement whereby steam pressure could then be used to lift water above the vessel. However, this would pose considerable difficulties in practice, because the cold vessel would initially cool the steam, and far more significantly, the water would tend to condense the incoming steam, and would readily do so if the surface of the water was appreciably disturbed by the incoming steam. This would waste steam and prolong the operating cycle. Further, the problems of dealing with steam at any useful pressure may have been insurmountable, and would in any case be attended by considerable danger.

Denis Papin anticipated (or was made aware of) the problems with Savery's engine of steam encountering the cold water by introducing a piston floating on the surface, and produced a model of his proposed pump in 1707.

Stephen Switzer, writing in 1729, stated that Newcomen was as early in his invention as Mr. Savery.[5]

It may well be significant that the intense activity directed at mine drainage coincided with the severe winters of 1697-1699, which were unusually wet as well as cold[6].

Newcomen's engine replaced Savery's receiving vessel (where the steam was condensed) with a cylinder containing a piston. Instead of the vacuum drawing in water, it drew down the piston. This was connected by a chain to a large wooden beam which rocked upon a central fulcrum. On the other side of the beam was a chain attached to a pump at the base of the mine. As the steam cylinder was refilled with steam, readying it for the next power stroke, the weight of the pump's piston and its rods acted to lower the pump piston and refill the pump body with water. Newcomen and his partner John Calley built one of the first engines at the Conygree Coalworks near Dudley in the West Midlands.

1710 About the year 1710 Thomas Newcomen, Ironmonger and John Calley, glazier, of Dartmouth, … anabaptists, made then several experiments in private, and having brought [their engine] to work with a piston, &c, in the latter end of the year 1711 made proposals to draw the water at Griff, in Warwickshire; but their invention meeting not with reception, in March following, throu' the acquaintance of Mr. Potter of Bromsgrove, in Worcestershire, they bargain'd to draw water for Mr. Back [Bache?] of Wolverhampton where, after a great many laborious attempts, they did make the engine work; but not being either philosophers to understand the reason, or mathematicians enough to calculate the powers and to proportion the parts, very luckily by accident found what they sought for. [7]

A working replica of this engine can be seen at the Black Country Living Museum nearby.

1712 The first of Newcomen's engines appears to have been the one erected near Dudley Castle in 1712. [8] See Conygree Coalworks

One of the last engines to be seen at work was at the South Liberty coal mine at Bedminster, near Bristol. [9]

c1715 It is possible that the first engine in Cornwall was erected by Newcomen at Wheal Vor.

Comparatively little is known of Newcomen's later life. By the time of his death, over a hundred of his engines, operating under Savery's patent (extended by statute so that it did not expire until 1733), had been installed by Newcomen and others in most of the important mining districts of Britain: draining coal mines in the Black Country, Warwickshire and near Newcastle upon Tyne; and lead mines in Flintshire and Derbyshire, amongst other places.

In his later life (at least), the engine affairs were conducted through an unincorporated company, the 'Proprietors of the Invention for Raising Water by Fire'. Its secretary and treasurer was John Meres, clerk to the Society of Apothecaries in London. That society formed a company which had a monopoly on supplying medicines to the Navy providing a close link with Savery, whose will he witnessed. The Committee of the Proprietors also included Edward Wallin, a Baptist of Swedish descent; and pastor of a church at Maze Pond, Southwark. Newcomen died at his house in 1729, and his body was buried at Bunhill Fields.

By 1725, the engine was in common use in collieries, and it held its place without material change for about three-quarters of a century. Near the close of its career its mechanical details were much improved by John Smeaton, who built many large engines of this type about the year 1770.

Despite Watt's improvement, Common Engines (as they were then known) remained in use for a considerable time. Probably the last Newcomen-style engine to be used commercially — and the last still remaining on its original site — is at Elsecar, near Barnsley in South Yorkshire.

Newcomen engines were not well-suited to providing rotary motion, due to the single power stroke. Remarkably, a Newcomen-type engine was built as late as 1810/11 for Farme Colliery. Remarkable, too, is the fact that it was used for the exacting duty of colliery winding.

1729 August 5th. Thomas Newcomen died and was buried in Bunhill Fields, London but the exact place is unknown. [10]