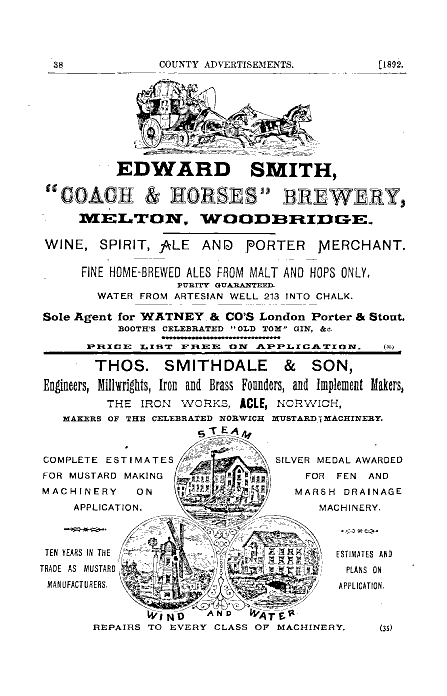 1873 Patent. '851. To Thomas Smithdale, of Saint Ann's Iron Works, King-street, in the city of Norwich, Engineer, for the invention of "a new auxiliary screw-propelling apparatus to be applied to fishing craft or other sailing vessels."'[2]

1878 'The Norfolk and Norwich Christmas Show ..... T. Smithdale and Son, St. Ann’s Iron Works, had at their stand a horizontal condensing steam engine, but that which claimed much attention was a steam turbine drainage pump, which seemed with the least amount of power to do the greatest amount of work — an immense body of water being lifted by a pump driven by engine of small horse power.... and Messrs. Smithdale of King Street, exhibited a fourteen horse-power horizontal condensing steam engine, steam turbine drainage pump, grist mill, land roll, water cart, improved horse gears, &c.' [3]

1883 Bankrupt. '...Liquidation by Arrangement or Composition with Creditors, instituted by Thomas Smithdale and Thomas Smithdale the younger, of St. Ann's Ironworks, in the city of Norwich, and of Panxworth, in the county of Norfolk, Millwrights, Engineers, Boiler Makers, Iron and Brass Founders, and Agricultural Implement Manufacturers, trading under the firm or style of Thomas Smithdale and Son...'[4]

1897 By this date they were at The Foundry, Acle (a former slaughterhouse).

Note: An 11-page history of the firm is available online[5]. It includes maps of the several works. St. Ann's works was bounded by Synagogue Street, Staithe Lane, and the River Wensum.

Information on many examples of the millwright's work carried out by the company, transcribed from quotations, etc., is available online, together with various contemporary reports relating to the business[6]