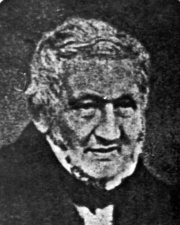 1804 Marriage(1) at St. Martin in the Fields, London to Charlotte Radwell

1824 Built a steam coach (details in 'British Locomotives'). States 'Burstall and Hill of London'. Burstall and Hill’s first steam carriage, built in 1824, failed from the common cause of being cumbersome and exceedingly heavy which, together with the bad road surfaces, resulted in the machinery being shaken to pieces. In an attempt to overcome these problems by experiment they next built a quarter-scale model which they exhibited first in Edinburgh, as this broadside announces, and afterwards in London. The model was 5ft 6ins long and 1ft 10ins high and worked at a pressure of 25 psi. It is reported to have been a success but a full-size version never materialized. Details and image in 'British Locomotives'

On the 3d of February, 1824, a patent was granted to T. Birstall and John Hill, of Leith, for a locomotive steam carriage; an account of which was first given in the Edinburgh Journal of Science.[1]

1827 While running in London at their enclosure at New Bedlam, Westminster Road, the boiler burst injuring a boy, the brother of Mr. Hill. [6]

1827 Exhibit a model of their steam carriage in Edinburgh with a detailed description. [7]

1829 Built the Perseverance for the Rainhill Trials

1851 Living in Edgbaston, Engineer and Dealer in Patents. With his wife and daughter.[9]